Terry C. Collesano, a lifelong Lewiston resident who has served 43 years in village office, including the past eight years as mayor, said Monday he won't run for re-election this June.

"It's a bittersweet day for me, for sure," Collesano said. "I expect my emotions will only intensify in the months leading up to my exit date."

Collesano's roots in the village are deep - his grandfather settled in Lewiston after emigrating from Sicily in 1895 - and his son Christopher now represents the fourth generation of Collesano barbers working in the family's Center Street shop.

"We would never leave Lewiston. He knows Lewiston better than he knows himself," Collesano's wife Jeanette said.

Collesano, 77, has been politically active since the late 1960s, when he ran for village trustee but lost by two votes. He served on several village committees in the 1970s and won a trustee seat in 1978, but stepped aside after one four-year term.

Collesano said he started thinking about stepping aside last summer, but didn't make the decision definite until conferring with his family over the Christmas holidays. He delayed the announcement until Monday so more family members could be present for the five-minute speech he made in Village Hall.

"After all these years of service, my family has finally agreed that it's time for me to step down," Collesano told the audience of about 35 friends, relatives and supporters.

His term will end June 30, but party caucuses to nominate candidates begin in March, so he needed to announce his intentions soon.

"I just thought it was time to move on to other options for me at this time in my life," Collesano told The Buffalo News.

Collesano said his health is good. He said he's been phasing out his involvement with his Olde Time Barber Shop on Center Street, working only two days a week and by appointment only. His son Christopher and another barber handle the rest of the work. 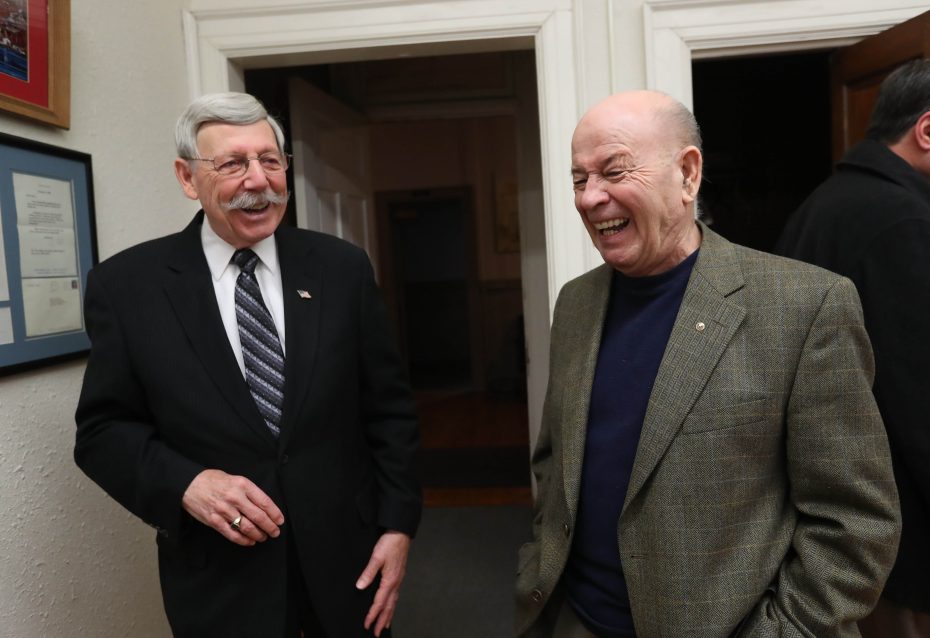 Lewiston Mayor Terry Collesano, left, shares a laugh with his friend Dave Maslan after he announces he won't seek re-election, retiring after a career in public service that spanned four decades, at Lewiston Village Hall on Monday, Feb. 19, 2018. Collesano was Lewiston's mayor for the past eight years. (Sharon Cantillon/Buffalo News)

He said his most memorable achievement was his contribution to improving the village's Niagara River waterfront and its "streetscape" on Center Street, with brick sidewalks and crosswalks adding a classier look to a community known for Artpark events, many cultural festivals and its deep roster of restaurants.

"It's become a destination," he said.

Collesano said his biggest disappointment was the continued vacancy of the nearly 200-year-old Frontier House. An apparent sale of the historic building recently fell through, he confirmed.

Sale of Lewiston's Frontier House may fall through