The 31 empty storefronts on Elmwood Avenue from Allen Street to Forest Avenue represent restaurants, boutiques and food markets that have closed their doors in recent years.

The two lawmakers will meet with State Sen. Chris Jacobs and Assemblyman Sean M. Ryan this week to discuss retail concerns on Elmwood, including parking, vacancies and decreasing foot traffic. An advisory group including representatives from the retail and residential communities will also be formed, Feroleto said.

"That is an alarming amount of vacancies," said Ashley Smith, executive director of Elmwood Village Association. "A healthy vacancy rate is 7 to 10 percent. You need some room for businesses to come and go, so I'm not overly concerned. The vacancy rate is high where blocks are in transition."

To be sure, there are plenty of thriving shops and restaurants along the Elmwood strip, and some vacancies have been quickly filled. When longtime clothing store Urban Leisure and Luxury closed its doors in August after 25 years, for example, its location was filled less then two months later with a Ten Thousand Villages.

But while the Elmwood Avenue strip has seen businesses come and go for years, several blocks affected by the closure of Women & Children's Hospital are a concern for community leaders.

The Elmwood-Hodge neighborhood is transitioning after the loss of Women and Children's Hospital, Smith said.

"You've lost the economic activity of that hospital since November," Smith said. "That's an 8-acre redevelopment site, and the status of the build-out is not clear."

Newbury Salads owner Paul Tsouflidis closed his shop at 470 Elmwood after his lease expired, Smith said. A sign on his former storefront said he moved the business to Hertel Avenue.

"You're looking at a lunch business that decreased because of the hospital closing and less foot traffic," Smith said. "I would not be surprised to see it vacant until we see the site development resolved."

Tommy Cowan, 38, closed Mid-Town Kitchen at 451 Elmwood in December. The restaurant known for its strong lunch crowd and night scene had a dinner business that struggled, he said.

It's a different story at Forty Thieves Kitchen & Bar, a pub that opened in August 2017 at 727 Elmwood, said Cowan.

"You see success with walkability. In other areas with vacant storefronts, you have destination spots where you park and drive, and park and drive."

The former Casa Di Pizza at Hodge and Elmwood remains vacant, long after it relocated downtown. The former Habibi Sheesha Lounge at 476 Elmwood closed down in January 2015 and remains shuttered. 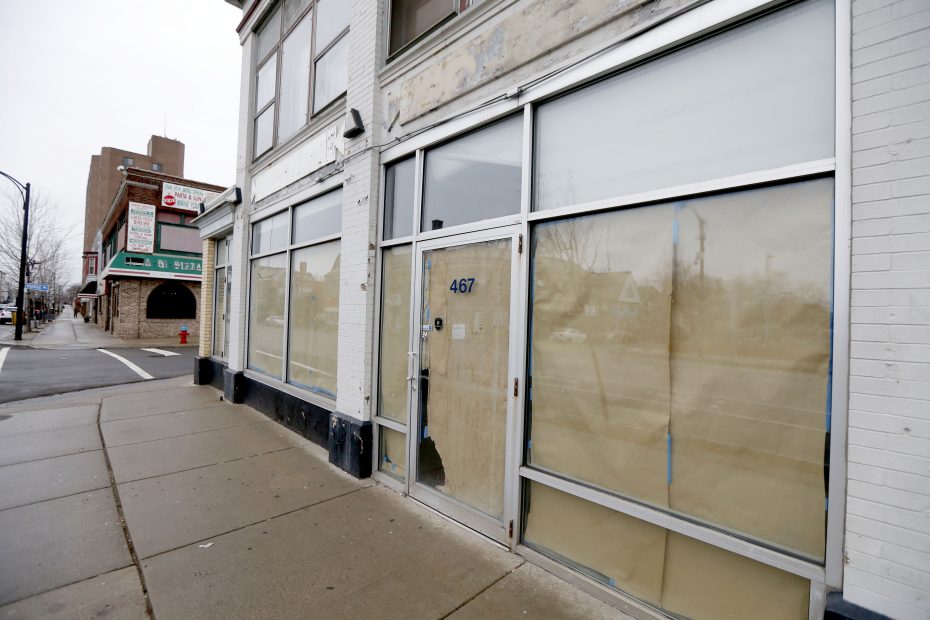 Businesses at the corner of Hodge and Elmwood avenues have suffered since the nearby Women and Children's Hospital closed. (Robert Kirkham/Buffalo News)

At least one property owner had an unusual approach to filling a vacant storefront. The new owner of Mother Nature Plant Emporium, 712 Elmwood, polled passersby with a sign, "What should go here?"

The Elmwood Village Association works closely with residents and retailers to improve the quality of life in the commercial strip and surrounding neighborhoods, said Smith.

The marketing concept of geofencing may be coming to retailers along Elmwood, said Smith. The concept allows the store to send a location-triggered alert to passersby informing them of a sale or special offer.

"One of the hardest thing for business owners is to keep up with technological marketing trends," said Smith. "A five-person business cannot compete with Amazon. What we do see prospering are salons, spas and tattoo shops – because you can’t get (those services) online."