A 24-year veteran of Catholic Health will take over as the system's CEO next month, an appointment that comes at a challenging time for health systems here and across the country.

During McDonald's 15-year-tenure, unusually long for the head of a health system, Catholic Health took on big projects and more than doubled its revenue into a $1.1 billion organization.

Sullivan said he looks to build on those accomplishments, and the system's legacy of service, while keeping an eye out for opportunities for collaboration with community partners.

But the new CEO must help the system navigate federal health care reform efforts, respond to pressure from payers and improve a relationship with its unions recently marked by contention.

And it's up to Sullivan to decide whether – if at all – Catholic Health will seek to change its competitive relationship with Kaleida Health, the region's largest health system.

"It is a high-visibility, high-pressure job and it's important that people be forward-thinking and realize where things are going," said Dr. Nancy H. Nielsen, a clinical professor in the University at Buffalo Jacobs School of Medicine and Biomedical Sciences and a former president of the American Medical Association, referring to health system CEOs.

Sullivan, who is 50 and lives in Orchard Park, takes on his new duties effective March 1.

He said he started at Catholic Health 24 years ago as an intern at Sisters of Charity Hospital, and he still has his first ID badge. The fifth-generation Buffalonian earned bachelor's and master's degrees from Canisius College.

He previously ran the home health care division, but since 2007 has overseen systemwide operations.

The Rev. Robert E. Zapfel, chair of Catholic Health Corporate Members and Sponsors Council, said Sullivan was one of just three local candidates among the nearly 30 interviewed for the job.

Zapfel said in an interview that Sullivan's experience serving as interim president and CEO of Sisters Hospital, and in managing the merger of Mount St. Mary's Hospital in Lewiston into Catholic Health, stood out to the council.

A search committee for McDonald's successor included representatives of Catholic Health’s board of directors, religious sponsors and medical staff. The council made the final choice.

"We cast a wide net, hoping for the very best. And when we looked at all the candidates, we found the best right at home," Zapfel, who revealed Sullivan's selection on Monday with William K. Buscaglia, Jr., chair of the system's board of directors, said in an interview.

The news was greeted by loud cheers and applause by the employees and guests gathered for the announcement.

McDonald, 65, announced in September that he planned to step down this year from the job he has held since 2002. He will stay on to help with the transition to Sullivan.

Sullivan is one of two people who had been groomed for a top management job by McDonald, who stayed off to the side Monday to keep the spotlight on his replacement.

"He is a fabulous person and he'll be a great leader for Catholic Health," McDonald said after the event. 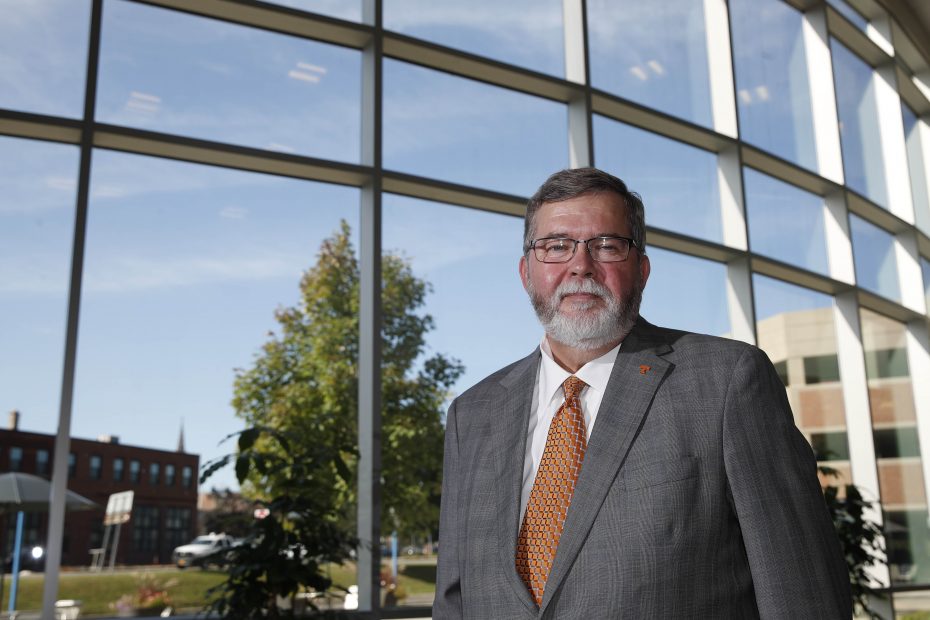 Catholic Health today has more than 9,000 employees and about 43 percent of the region’s market share, as well as affiliations with 1,600 physicians in Catholic Medical Partners.

Earnings declined in 2015 and 2016, but McDonald can point to 14 consecutive positive years in bottom-line revenues and $670 million in facility investments during his tenure.

Catholic Health will stay true to its mission of delivering high-quality care to patients while continuing to reinvent itself and to seek out collaborations that make sense, Sullivan said.

"Catholic Health is financially stable," Sullivan said after the event. "There's so many moving parts at the state and federal level, reimbursements, changes and pressures from the payers, that we need to be nimble and continue to evaluate our portfolio of services."

Will those partnerships include Kaleida Health?

"It has to be the right collaboration," Sullivan said in an interview, pointing to what he considers the differences in how the two systems deliver care.

Kaleida Health and Catholic Health compete fiercely on everything from maternity care to heart surgeries.

Nielsen said she would like to see the systems cooperate more in the delivery of specialized, high-end services.

"You can end up having several mediocre services, if you're competing, or you can go together in alliances that create something really terrific," Nielsen said. "That would be my hope."

Nielsen said she doesn't know Sullivan personally, but her daughter-in-law, a nurse in the system's home health care division, speaks very highly of him.

Can Sullivan reset Catholic Health's relationship with its unions, which have engaged in bitter contract talks with the system in recent years?

Sullivan said at his news conference that he wants Catholic Health to remain "the employer of choice" for health care workers in the region.

"He has a very good relationship with workers," Nielsen said.

Sullivan and Catholic Health also must respond to the upheaval in Washington, D.C. Health care providers that still are coping with the changes wrought by the Affordable Care Act now don't know if President Trump and congressional Republicans will preserve, or overturn, the law.

"The biggest challenge will be just remaining true to our mission," Sullivan said. "Making sure that in a time of crisis and change and uncertainty we stay focused, and communicate."

No matter who's in the White House, Nielsen said, it's clear that the federal government wants health systems and providers to shift from a fee-for-service model to one that pays for value.

"Everybody is trying to adapt to a completely new model, where a hospital is not just providing services for acute illness, but where they are an integral part of a patient's life," Nielsen said.

Sullivan said in the interview that he sees a bright future for Catholic Health.

"There's enough health care to be delivered in Western New York that it's important that we meet the community needs first, not so much focus on what Catholic Health needs or what the other systems need," Sullivan said.