Long before Stephen E. Still became a millionaire, University at Buffalo officials quietly cultivated him as a potential major donor.

"They'd say, 'Gee, are you free for a coffee?' " recalled Still, a 1976 UB alumnus. "There was no expectation to bring your checkbook or anything, but it started to create a relationship."

The donation is part of an effort to generate a record $600 million in new charitable gifts and pledges for UB and turn around years of lackluster fundraising.

The university's latest comprehensive campaign has been in a quiet phase since 2013, with fundraisers tapping on the shoulders of UB's best friends to get their gifts and pledges in early. The campaign will morph in April to a public phase, including a full-blown marketing blitz aimed at attracting donations in support of student scholarships, campus facilities improvements and faculty research.

University officials are being coy about their campaign goal. They told State University of New York officials in 2015 that the campaign would seek $600 million. But that same year, Stony Brook University, SUNY's other intensive research university on Long Island, publicly announced a $600 million campaign, which is scheduled to conclude in July as the largest campaign SUNY has ever seen.

Not to be outdone, UB officials are now saying they expect the final tally in 2020 for their campaign will be the largest in SUNY history. But they declined to provide an exact number for their campaign goal. Rodney M. Grabowski, UB vice president of philanthropy and alumni engagement, would say only that the number was "north" of $600 million. He also said it would be announced at a campaign kick-off event on April 27.

The huge sum would be more than double the $291 million that UB raised in its last and biggest capital campaign, which wrapped up in 2003.

Six hundred million dollars is a lot of money – more than the combined annual operating budgets of the towns of Amherst, Cheektowaga, Tonawanda, Hamburg, West Seneca, Lancaster and Orchard Park.

But it's barely enough to keep UB in the same league with peer universities, some of which raise $600 million in a year. Like tuition and student debt, the quest across the country for philanthropic dollars continues to grow. Higher education institutions raked in a record $43.6 billion in 2017. Harvard led the way, pulling in $1.28 billion in donated cash last year.

"While giving keeps going up, so do expenditures," said Ann E. Kaplan, vice president of the Council for Aid to Education, which tracks philanthropic giving to colleges and universities. "Charitable giving also doesn't tend to support the same things that tuition, room and board supports, that government funding supports, that interest on endowment supports. It's important, but it's not a replacement for other funding sources."

Gov. Andrew M. Cuomo and state legislators gave UB and other SUNY schools a financial boost when they agreed in 2011 to five consecutive years of modest tuition increases. But those predictable tuition hikes haven't been continued in recent years and the state's budget for SUNY has stayed relatively flat.

UB President Satish K. Tripathi emphasized in a speech last fall to the campus and local community that the university needed to "encourage and inspire" more philanthropy if it hoped to join the ranks of the nation's very best public research universities.

Those numbers, which are collected by the Council for Aid to Education, do not reflect the overall philanthropy happening at UB, said Grabowski.

The Council for Aid to Education numbers count only gifts that come in the form of cash in a given year and do not include pledges or in-kind donations of services or equipment. UB receives many gifts pledged to be paid over five to 10 years, as well as gifts of valuable equipment, software or other in-kind donations.

"We would like to increase our philanthropy, obviously, across the board," said Grabowski, who started at UB in December, replacing Nancy Wells.

In 2012, UB set lofty goals for improving the rate at which alumni give to the university and increasing the amount of charitable dollars coming into UB annually.

When they quietly launched the comprehensive campaign, officials projected increases in fundraising of $40 million per year by 2020. They also projected improving UB's alumni giving rate to 10 percent by 2018-19.

So far, the rate has continued to slide, as it has at many colleges and universities. In 2007, 12.4 percent of UB alumni gave to the university. In 2017, it was 7.6 percent, while the average for state flagship universities was 9.1 percent.

Fundraisers attribute falling rates in part to technological advances that allow institutions to better identify, track and contact more alumni. But there are other potential reasons. The explosion of student debt could be one factor, with graduates getting turned off by alma maters that urge them to "give back" while they're still struggling to pay down student loans.

Alumni who feel connected to their alma maters are more likely to give, according to a variety of research. And that connectedness often is harder to develop at big public universities, where the size and complexity of the institution can be overwhelming for undergraduate students. For many years, UB was primarily a commuter campus, so plenty of its alumni don't have the residential college life experiences that help cement deep bonds with an institution. That's changed over the past few decades as the university added new residence halls and apartments on and around campus.

Other large public universities have used intercollegiate sports to forge closer ties with students and alumni, and UB is trying similarly to promote its Division I men's basketball and football teams. Those programs are still relatively young and don't have a history of sustained success like other large flagship universities.

"Those things truly add to the culture of feeling like you're an owner of UB while you're here as a student and you're going to be an owner once you leave here," said Grabowski. "Ultimately, will it have a positive effect on philanthropy? It very well could and should, and we expect it to. But it is not something that happens instantaneous. Our transformation from being a commuter school to a residential campus has taken decades, and so you don't necessarily change that overnight."

Many alumni also assume that UB gets adequate state support and doesn't need philanthropic help, even though the percentage of the university's operating budget covered by state tax dollars continues to decline.

Grabowski has been focused on meeting and talking with as many UB alumni as he can. He was in Florida this past week with Tripathi  and Jean Wactawski-Wende, dean of the School of Public Health and Health Professions, for an evening reception with 130 alumni in the Sarasota Ritz-Carlton. They continued on the next day to meet with 75 more alumni for lunch in Naples. Tripathi and Grabowski will host a similar luncheon Monday at the Four Seasons Resort in Palm Beach, with UB neurosurgeon Dr. Elad Levy providing an overview of his work in treating stroke victims.

"It's showcasing what we're doing as an institution," said Grabowski.

Levy and Wactawski-Wende, who is renowned for her epidemiological research on women's health, are the kinds of academic leaders in their fields that UB officials hope to attract to departments across the university. One way to do that is by creating more endowed professorships, which provide a permanent source of funding for faculty posts and can be a powerful incentive in luring accomplished researchers to Buffalo. It's an area of need university officials hopes to address through the comprehensive campaign, while also finding more charitable giving for student scholarships, faculty support, program development and facilities improvements.

"Generally our fundraising is budget-enhancing fundraising," said Grabowski. "We're not fundraising to keep the lights on." 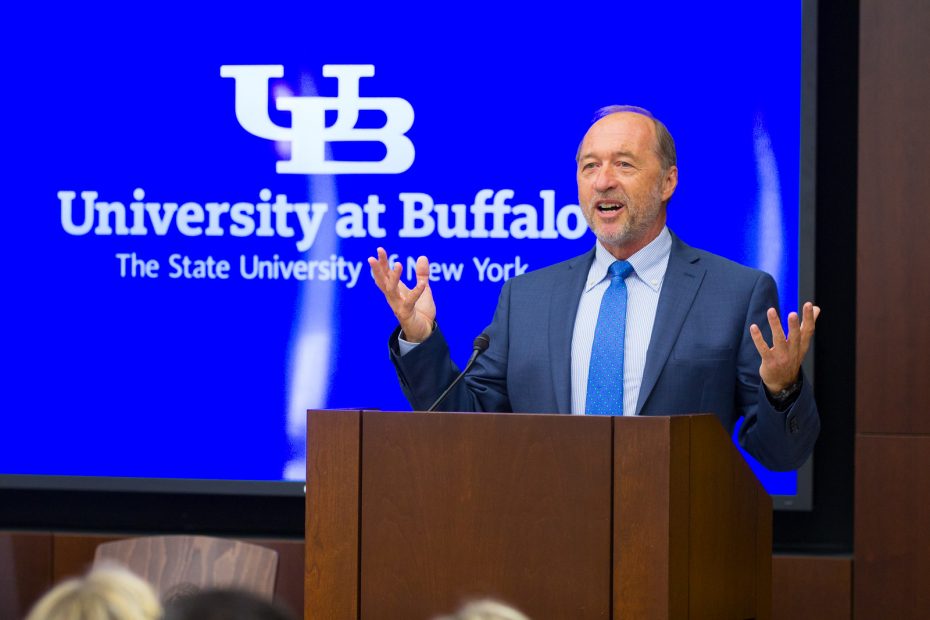 Stephen E. Still announces he will give a $4 million gift to the University at Buffalo for the Steven Still Institute for Sustainable Transportation and Logistics in Capen Hall. (Photo provided by UB)

Still gave to UB over Princeton

Stephen Still's gift, for example, will benefit the School of Engineering and Applied Science's Institute for Sustainable Transportation and Logistics and its forays into the development of autonomous vehicles. It's an area Still is passionate about. He spent his entire career in transportation logistics, and he believes autonomous vehicles and better transportation planning will dramatically reduce car accidents and save thousands of lives every year.

Still became an instant millionaire in 2017 with the sale of his stake in two successful aviation companies. But his gift to UB was anything but sudden. A succession of deans from the engineering school started visiting him many years ago on periodic business trips to the Washington, D.C., area where Still lives.

Still's involvement with UB gradually expanded. He regularly came to campus to talk with students about the transportation industry. He became an active member of the engineering school's advisory board. So when Liesl Folks, the current dean, brought up the possibility of a significant donation, Still wasn't caught off guard.

"You know, it's never an easy ask. You've got to build real trust. It has to be trust between the alum, the philanthropist, and the organization, that we do have aligned objectives and we are going to be good stewards of the funding," said Folks.

As Still, 62, prepared to sell his companies and become semi-retired, university officials worked with him on how to structure and use his gift.

Still just as easily could have donated to Princeton University, where he received master's and doctoral degrees. Princeton, one of the wealthiest universities in the country, routinely brings in gifts of $1 million or more.

"I sort of joked that if I would send a million dollar check to Princeton, I'd get a form letter back: Dear sir," said Still.

He figures his gift will have more impact at UB, and maybe even inspire other donors.

"Whatever this can do to set an example or be helpful, I'm happy to do whatever I can to create some momentum," he said.