Bob Fahey dreamed of becoming an officer in the Navy.

As a teenager during World War II, he studied photographs of naval ships battling Japan in the Pacific Ocean. He wanted to be part of the sea assault action.

But by the time he was accepted to the U.S. Naval Academy in 1946, the war was over. However, he ultimately would not be disappointed. The Korean War began when he graduated in 1950.

And as it turned out, he would do his fighting from the air instead of the water.

He and other Annapolis graduates were given the opportunity to switch to the Air Force, which had split off from the Army a few years earlier and was in need of pilots.

Fahey says it was too good an offer to pass up. His dream of serving on a ship had evolved after spending part of a summer on the USS Coral Sea, an aircraft carrier, following freshman year at Annapolis.

"The thrill and excitement of taking off on an aircraft carrier and then turning around and landing on it gave me the spark for airplanes," he said.

And there was the persuasive sales pitch from an Air Force general.

"He said, 'Where would you rather land on a rainy night? On a nice long 8,000-foot runway or on an aircraft carrier where you might make it or not," Fahey said.

By the end of October 1951, Fahey was flying F-84 jet fighter bombers with the 49th Fighter Bomber Group, 9th Squadron, above North Korea.

Known as the Thunderjet, the plane carried two 1,000-pound bombs and was equipped with six 50-caliber machine guns.

"We flew interdiction missions where we would drop our bombs on lucrative targets. It could be a train carting enemy troops, bases with ground troops, a ship or a factory," Fahey said.

If the bombs missed their targets, he added, pilots got another bite at the apple because they could drop to lower altitudes and strafe targets.

"The 50-caliber machine guns were powerful weapons," he said. "You flew in, hit the targets and got back to the base as soon as possible."

The air above North Korea was unfriendly. Twenty-caliber and 40-caliber anti-aircraft guns menaced the pilots.

"We were very fortunate that we did not encounter target-seeking rockets being shot at us like the pilots in the Vietnam War," Fahey said, adding that his plane was struck only once.

"Another pilot saw the damage and radioed me saying, 'Bob, I recommend you take an early abort and land as soon as possible.' I landed right after we crossed into South Korea."

Other pilots were not so fortunate. 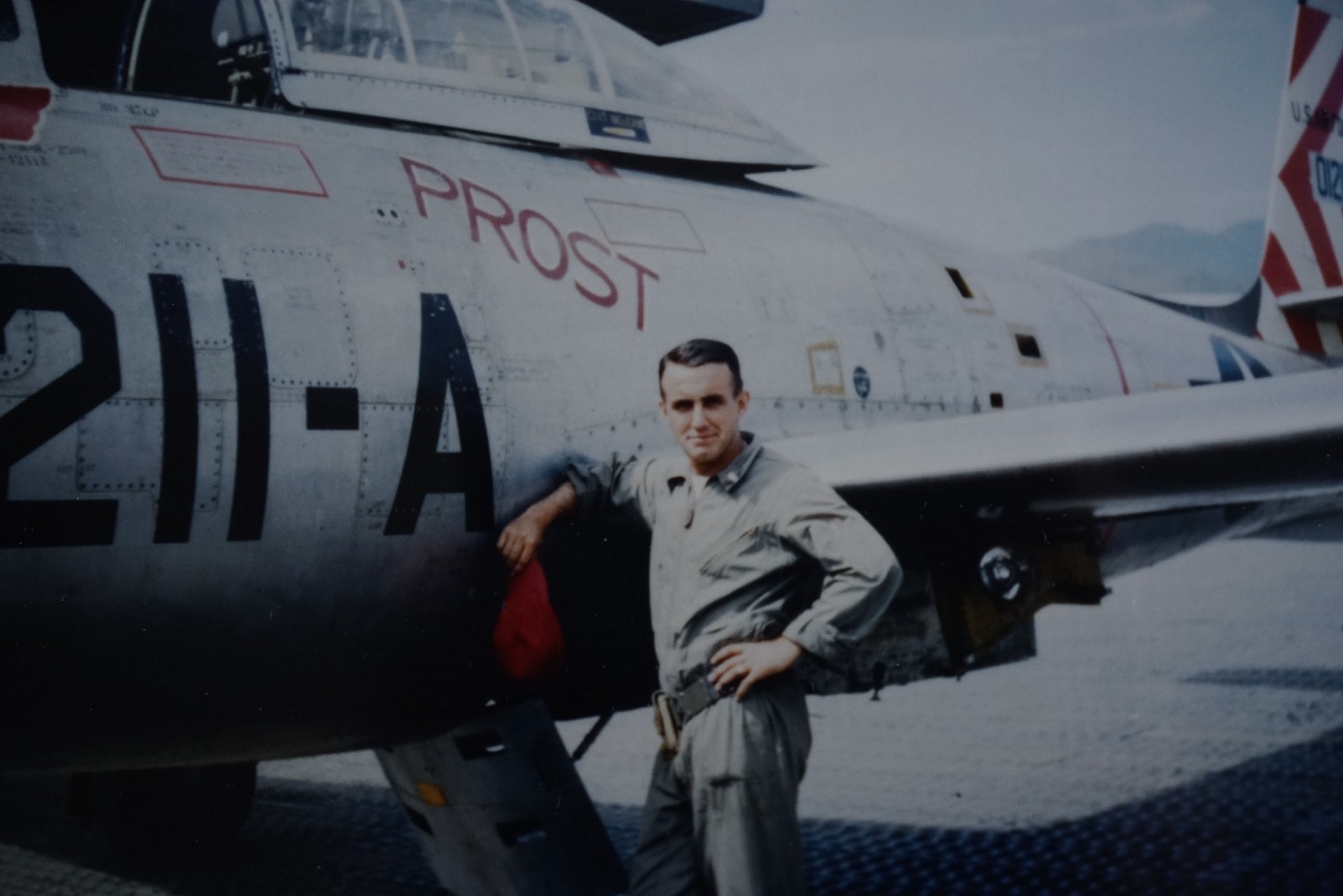 Korean War vet Bob Fahey in a 1953 photo beside his F-84 fighter bomber, with ‘Prost,” the German salutation meaning ‘cheers,’ on the side.

"I don't want to make it seem more dangerous than it was, but we lost a few pilots. We'd ask, 'Did anyone see him go down? Was it on land or in the water?' We had been briefed not to go down in the water. It was winter and we were told we wouldn't last two minutes, it was that cold," he said.

After flying 73 missions, Fahey said he was transferred to the targets division of the 5th Air Force Headquarters in Seoul.

"I had the experience to identify the best targets to attack from photographs that were taken, but after 60 days, my commanding officer said, 'Fahey, you're on the next plane home.' I didn't ask to go home, but I said, 'Thanks, that's good news.' "

While stationed in Texas, Fahey snagged a week of leave and returned to Buffalo.

"My brother's wife set me up on a blind date with a beautiful South Buffalo girl and I knew right away she was my Number One," Fahey said of the former Marianne Comerford.

A natural born salesman, Fahey said he wanted to come up with an irresistible "package" to sell her on the idea of marriage. But he knew the distance from Buffalo to Texas would be an impediment.

Fate offered a helping hand. When he returned to Texas, Fahey said a call went out for volunteers to transfer to a new air base in Bangor, Maine.

"I thought to myself, 'It will be a heck of a lot easier to make the sale for Maine than Texas.' "

"We got married in June 1953 and she loved being up in Maine. But would you believe that in late September that year our outfit was transferred to Chitose Air Force Base in Japan. It was only for 90 days."

But it was enough for his bride back home to question if a life in the Air Force was best for them.

Her husband agreed when she shared those concerns.

"When I was getting out of the Air Force, some of the other pilots said, 'Fahey, you're crazy. What are you going to do? You have a good job.' I told them, 'I like making my wife happy and whatever I do, I'll work like hell at it.' "

The couple returned to Buffalo and Fahey became a successful salesman for Prudential Insurance.

He and Marianne raised four children and "had 59 wonderful years together" before his wife died five years ago.

Fahey says he continues to find meaning in life as a grandfather and great-grandfather. He also works with his daughter Carrie Fahey, who sells insurance and serves as a financial planner.

"I get up every day and I'm out the door. I go to early Mass and then to our office in Williamsville," he said. "The key for me is to keep busy and try to enjoy life and keep healthy."