But she was looking up, inside the lobby of the Scott Bieler Clinical Sciences Center on the Roswell Park campus.

Her eyes settled on 35 medallions. She knows their significance and feels their energy. She designed them with purpose.

"These kind of have the feeling of those full, perfect, globe ready-to-be blown dandelions," said Soudant, 51, a cancer survivor who finds wonder where others find weeds. "The dandelions are waiting to be wished on. I like that potential."

"She's been on the launching pad for a while and is taking off," said Aaron Ott, public art curator at Albright-Knox Art Gallery. "She's able to produce works that are beautiful and have this sense of wonder."

Her dandelion creation "Wish Field" made its debut nearly two years ago inside the Bieler Center, a focal point on the newly renamed Roswell Park Comprehensive Cancer Center campus. 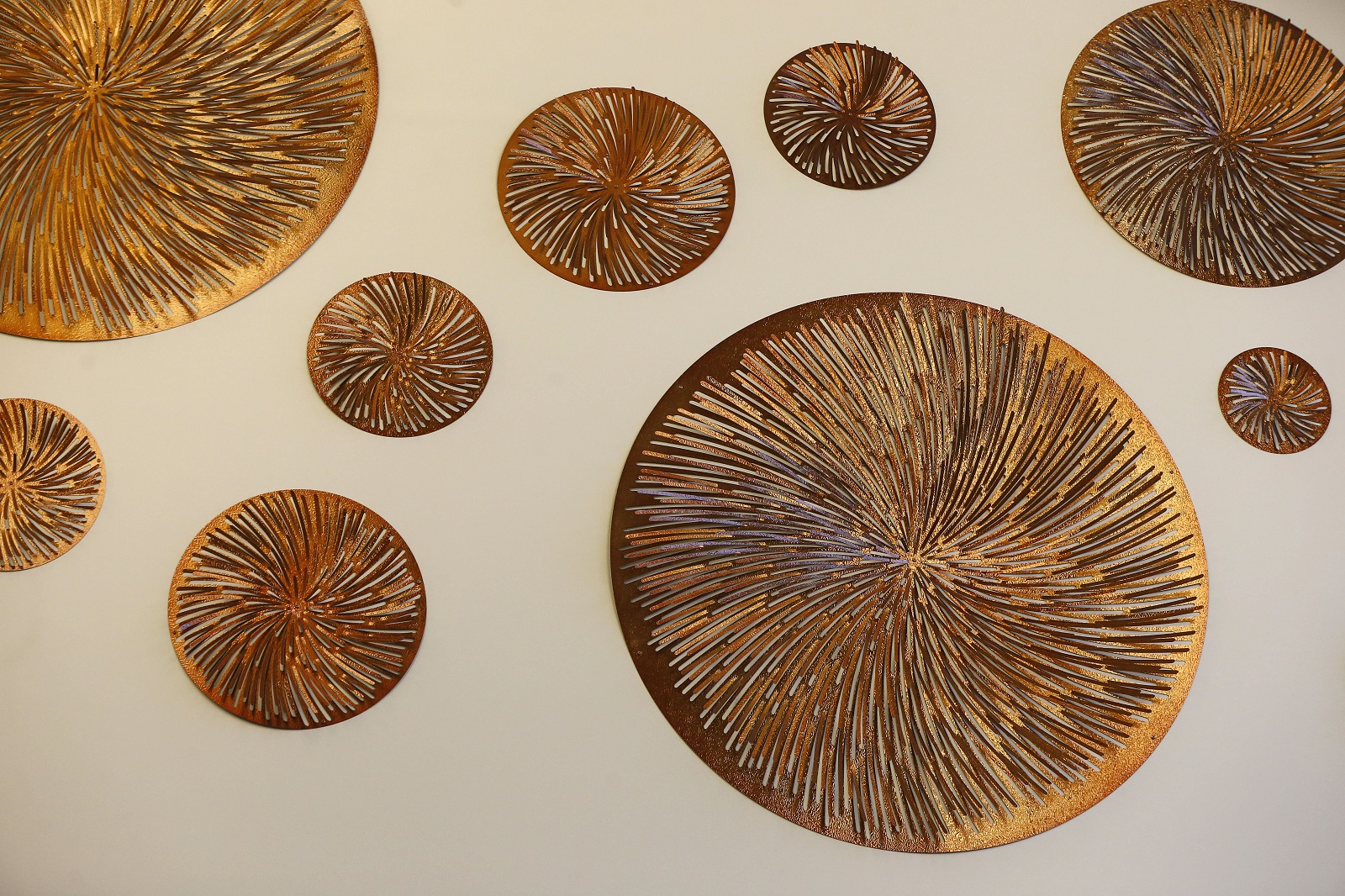 There's power in those petals, which she likens to a field of "perfect blooms." Their tines extend outward, like dandelion seeds that children delight in blowing, sending wishes into the air. Intertwined is a message of hope and healing.

"The logo is the act of making the wish," said Soudant, who beat a severe form of Hodgkin's lymphoma at 32, while living in Colorado. "It's the wish in process. And that's the thing: Everybody who walks into the building is wishing for one thing. They are wishing that cancer not be a thing, anymore."

Soudant – a graphic designer, artist, sculptor, photographer, assistant University at Buffalo art professor – knows about wishes. She has had plenty. She navigated a fractured family life, growing up in Europe, watching her parents' marriage fall apart. Her emotional pain nudged her to examine people and things. And that finds its way into her work.

Gazing at "Wish Field," Soudant ran her fingers across the scar along her throat, a reminder of a biopsy, and the place where a port implant used to provide medicine to her heart.

"It's very meaningful for me. It's a serious, serious privilege," she said of designing Roswell Park's new logo. Without prompting, she told her own story of cancer, describing a 17-centimeter tumor the size of a grapefruit that once grew where heart, lungs and aorta converge.

"I have such an innate understanding of what the people go through when they come into a building like this," she said. "This was a very deliberate decision to create a sense of warmth as opposed to a sense of sterility, which is usually what you have in hospitals."

Soudant lived the anxiety and terror that patients and families often face as they cope with cancer.

She wrote about her tumor, calling it "a growing ugly fruit" that wrapped around her heart. She endured 12 cycles of chemotherapy, every two weeks for six months. Another six months of radiation followed.

Her penchant for dandelions stems from childhood summers spent in Sweden, where her mother made flower crowns of dandelions.

"Dandelions were like magical flowers," she said. "Tell me a dandelion is a weed, and I'm like, 'Yeah, go to hell.' "

Weed or not, it was a natural fit for Roswell Park's new logo that accompanied its recent rebranding.

"This building is about the passion of making sure that our patients have that hope that they're going to survive their therapy and go on and beat this disease," said Candace S. Johnson, Roswell Park's president and chief executive officer. "Art helps set the environment for that. It's a stressful situation when you're dealing with a diagnosis of cancer, and artwork has an ability to get the blood pressure down.

"So here you have Shasti, a cancer survivor. She has struggled and been that scared person. She is so special because she puts herself into her work. That's the thing I love about her," Johnson said. "Her whole 'Wish Field' concept just seemed to ring true to all of us here. She's an inspiration."

But her work is not confined to Roswell Park. Orange steel panels transformed into a 25-foot-high "Weeping Wall" locked in the theme of hydropower inside the atrium at 500 Seneca, a mixed residential and office development that once was a box factory in the Hydraulic District. Soudant was looking to make something with "a sense of flow." 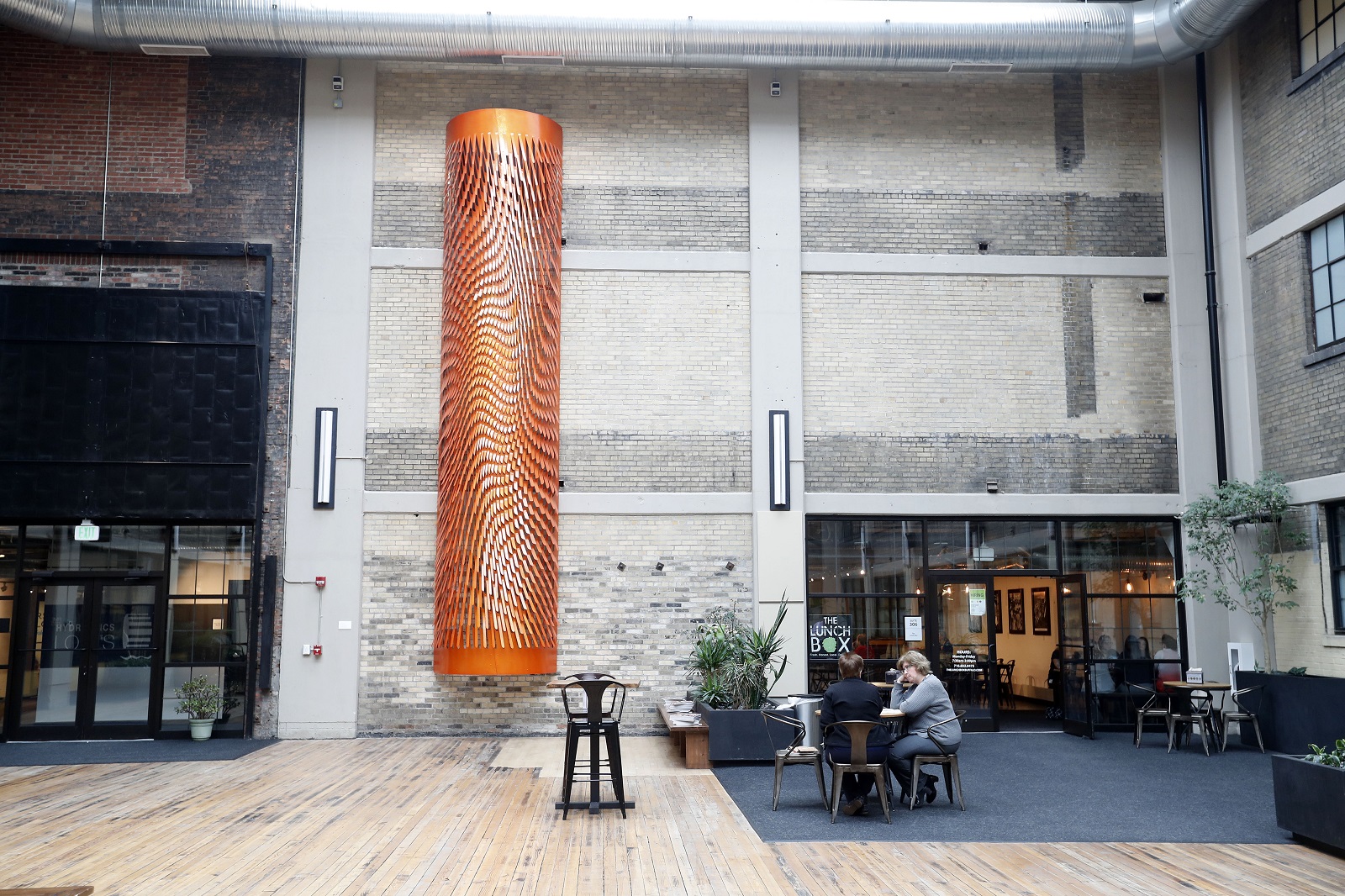 "Shasti's art makes people discuss art and what it is. It's less meant to blend in, but it complements the space," said developer Sam Savarino, whose company commissioned the work. "Her art could be a little jarring. A lot of it is noticeable, and there's a lot of her in her art. And that's a good thing."

Much of her public art accents major downtown developments, including future ones in the works like at 201 Ellicott St.

"Her work isn't just a crowd pleaser," said Chris M. Siano, a UB Art Department instructional support technician who has worked with Soudant. "She just has a way of connecting with people."

Siano had a hand in the study models of the "Gut Flora," inside the Niagara Frontier Transportation Authority's Allen-Medical Campus Station at UB's new downtown medical school. Installed in 2017, it's a burst of rainbow colored powder-coated stainless steel twisting into a biological DNA formation.

For Soudant, the piece embodies her fascination with structures of viruses, bacterial molecules and medicine.

Three years earlier, the Nuit Blanche overnight public art festival in Toronto found her producing "Half Life," when she sent performers in special helmets she designed. Actors used invisible ink to mark the skin of festivalgoers to test them for "the half life virus." If it glowed – and for thousands, it did – it meant you had the half-life virus and weren't fully living your life.

"She's very curious. It's sort of this investigatory practice where she constantly is taking in the world, whether it is politics, or science, or other artists," Ott said. "She's sort of seeing the world anew, with us. She's as much a participant in her own work, as she is the producer." 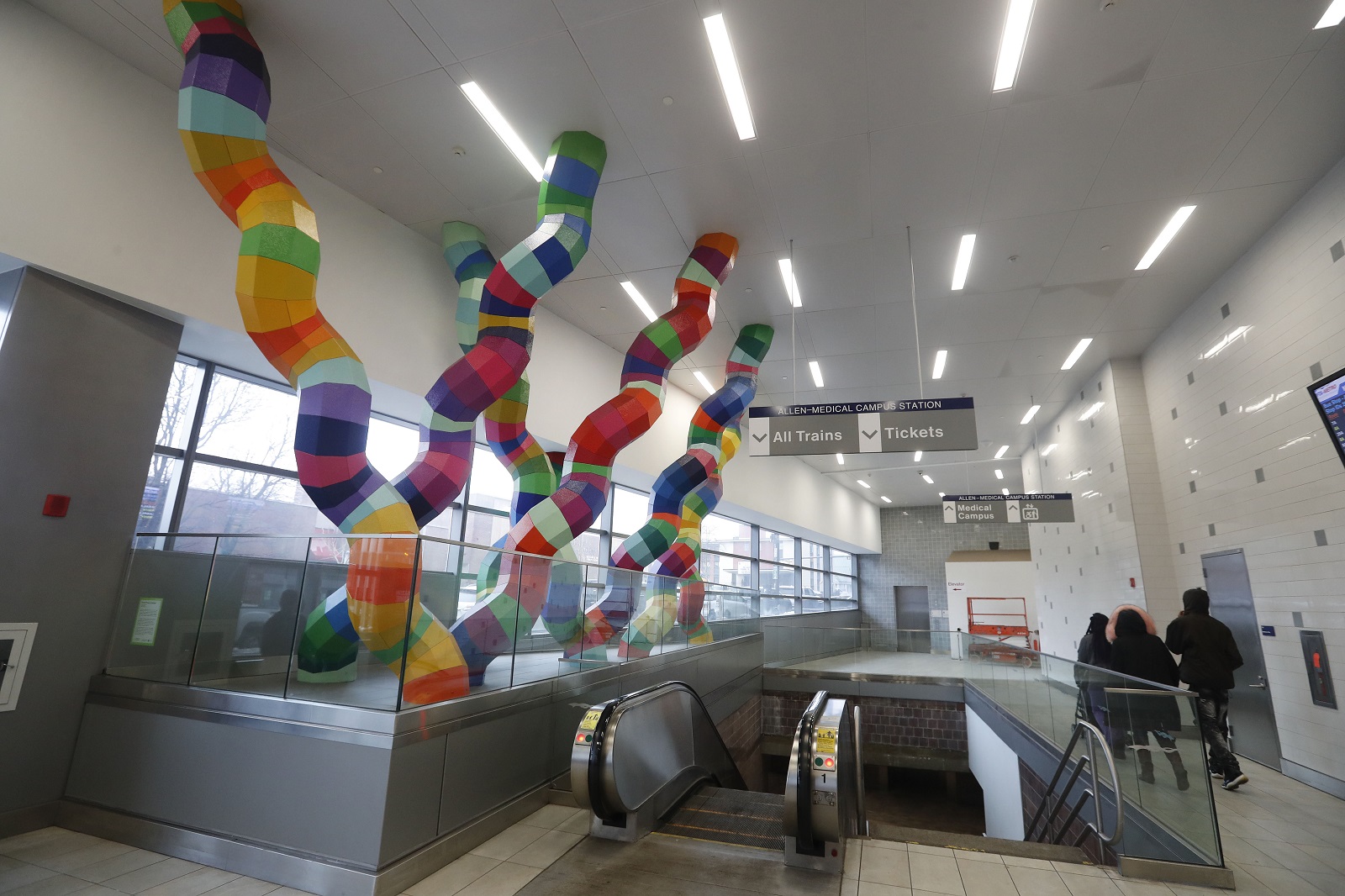 Her creativity continues spilling out in unconventional ways. An innovative design called "900 Moons is Not Enough" didn't come to fruition. But Soudant wants to make it somewhere.

CannonDesign and Soudant teamed up to create a concept for the exterior of a Medical Campus biomedical research facility that has not happened. It would have featured a repeating pattern of crescent moons shaped like hollowed-out egg shells, playing off light, facing eastward, toward the sun.

The design signified the average human lifespan of 72.4 years, she said.

"And that is not enough for a life. Absolutely not," Soudant said. "My God, I want to live to be at least 96, because mostly I am curious. I just want to know what happens. It's the age my grandfather died and he was a pretty dynamic, awesome human being."

Deep in the backyard of her North Buffalo home sits a red barn, home to her studio. It is full of "chaos" as she puts it, a little bit of everything.

Soudant has called Buffalo home for 13 years and lives with her husband and daughter, Ruby, now 14. She loves living in a city rich in history, architecture and art.

She said she finds meaning in the city's renaissance.