Joe Williams Sr. counts himself among the Tuscarora Indian Reservation residents with "a good well."

"No sulfur, smelled good," Williams said of the water at his home. "Most people around here aren't as lucky."

Still, he won't drink the water.

A federal report four years ago revealed many wells on the reservation are polluted – contaminated with E. coli bacteria, lead or toxic chemicals.

But getting clean water piped onto the 5,700-acre Indian reservation in Niagara County illustrates the difficult issues that have long complicated the relationship between a tiny sovereign nation and the U.S. government.

The federal Indian Health Service report recommended the installation of public water to solve the problem.

But that idea has run into resistance from those on the reservation concerned about sovereignty. Many oppose the idea of outside help. Some say there are widespread fears among the nation's 1,200 residents that making a deal with the federal government for water would harm the nation's independence.

"They're the ones who want to put it in – not us," Tuscarora Chief Leo Henry said.

Tuscaroras like Williams oppose a public water system for fear it would impinge on their sovereignty.

"I don't think they should do it, because not only would they charge us, they'd take our land," Williams said, referring to rights of way or easements that might be needed for water mains.

Williams uses an ultraviolet light system to kill bacteria in the water and filters it heavily, but only uses it for washing and filling the aquarium for his large tropical fish collection in his living room.

"It smelled good, but I wouldn't drink it. I wouldn't let my kids drink it," Williams said of his well water.

Water mains do not extend to the Lewiston reservation, so many of the 1,200 reservation residents depend on wells to provide water for drinking, cooking and washing.

Do they oppose a water system?

"It's none of the outside world's information to be known. We're a sovereign nation," Henry replied. "We deal with the federal government. If you want to talk with them, you can talk with them."

There have been talks with the federal government, including public meetings on the reservation with Indian Health Service officials. But little has been resolved so far.

"The Indian Health Service, with EPA funding, is currently conducting a survey to identify potential water and service line connection locations," the Environmental Protection Agency said in a statement. "EPA has also participated in meetings with the Nation, Town of Lewiston, Niagara County and Indian Health Service to discuss how best to provide an economically and environmentally sustainable option to support the drinking water needs of the Tuscarora Nation."

The Indian Health Service said it has paid for wells or septic systems at 77 Tuscarora homes in recent years.

Tuscaroras who opt not to drink well water have options.

Some deal with businesses that haul water in tanker trucks to fill their water tanks or cisterns.

A Tuscarora woman who didn't want to give her name said many residents use such a service, at least for showering and cooking purposes. The water often comes from a fire hydrant in Lewiston.

Others buy bottled water. An employee at Patterson's Trading Post on Upper Mountain Road said the store sells about 24 five-gallon jugs every week. They cost $9, counting a $5 deposit, and the store charges $4 to refill them. The water is imported from Canada, the worker said.

Some residents go to the Nation House, where the Tuscarora administration gives away well water that has been filtered and treated. A hose connected to a faucet on the outside wall of a garage is the 24-hour source. 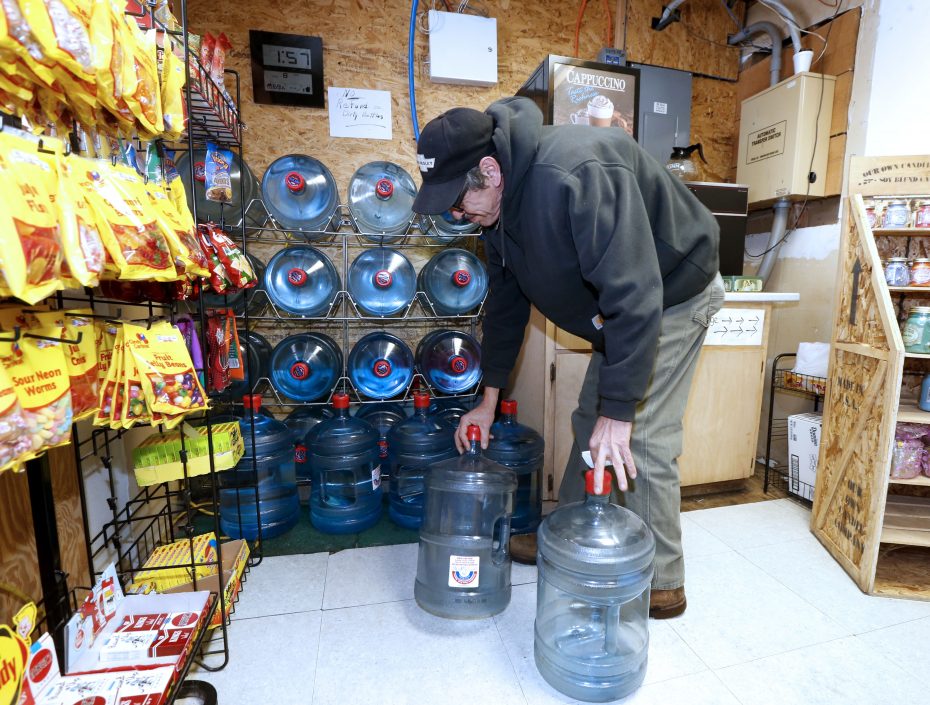 Fritz Crogan, an employee at Patterson's Trading Post on Upper Mountain Road in Sanborn, removes empty drinking water jugs to be recycled at a later date. The store is a popular location for residents of the Tuscarora Reservation to purchase drinking water for their homes that often fail or experience off color tastes. (Robert Kirkham/Buffalo News)

A few Tuscaroras have laid pipes to obtain Niagara County water on their own.

Lewiston Supervisor Steve Broderick said the town resells county water to the Smokin' Joe's gas stations on Saunders Settlement and Indian Hill roads and to owner Joseph Anderson's home. Another homeowner who lives along the border of the reservation has two town water tap-ins.

"If the town can be part of helping the reservation get clean water, we'd be all for it," Broderick said.

Tuscaroras who are eligible for a monthly food distribution also can obtain free bottled water.

Occasionally, someone on the reservation asks for a well to be tested.

The 2014 federal report dealt with 140 wells scattered around the reservation. The tests showed 96 of the wells contained some type of coliform bacteria.

The Tuscaroras don't have a sewer system either. The problem seems to be that the wells are inadequately constructed and are dug too close to septic tanks, Gwozdek said. Sewage leaching from the septic tanks infiltrates the water wells.

Anywhere else in Niagara County, something like that would trigger enforcement actions over violations of the building code and the sanitary code – but not on sovereign Tuscarora land.

"We have no regulatory authority on the reservation," Gwozdek said. "We'll send a letter, give them instructions on how to decontaminate that well. There is a way of disinfecting a well, basically using chlorine bleach."

But some pollutants can't be cleaned up with bleach.

The Indian Health Service tested 51 wells for volatile organic carbons or heavy metals. Fifteen wells tested positive for some chemicals, and 14 of those contained lead. Five of the 14 exceeded the EPA safety standards for lead in drinking water.

These findings are nothing new. The Tuscaroras had 68 wells tested between 1998 and 2000, and E. coli was found in almost half of them, according to the 2014 report. Also, petroleum hydrocarbons were found in 22 of the 68 wells.

The New York Power Authority installed five monitoring wells on or near the reservation in 2003. Four of the wells detected chemicals found in gasoline, such as benzene, toluene, xylene and methyl tertiary butyl ether.

In follow-up testing, the EPA checked 30 wells in December 2003 and found gasoline-related chemicals in eight of them.

"Previous studies in the Niagara Falls area have shown naturally dissolved minerals and corrosivity in the aquifer, which may contribute to elevated lead levels," the EPA statement said.

Besides the chiefs, The Buffalo News interviewed nine Tuscaroras for this story. All but Williams asked not to be identified.

"Being a sovereign nation, we don't rely on outside help," said a former reservation resident.

He said concerns over water quality are relatively recent.

"Growing up, we never tested," the former resident said. "We never thought there was an issue. We drank from a hose."

As time went on, however, the water quality seemed to deteriorate.

"We would wash and do clothes in the groundwater, but we wouldn't drink it," the former resident said.

"It has a lot of sulfur in it," a Tuscarora woman said. "It never made sense to me to shower in water that smelled of rotten eggs."

Chief Kenneth Patterson blamed the New York Power Authority, which diverted Fish and Gill creeks on the reservation during the construction of the Niagara Power Project and its nearby reservoir in the late 1950s.

"The wells were OK, and then they started going dry," Patterson said.

The Power Authority disagrees, based on testing leading up to the Power Project's 2005 relicensing.

"Results showed that the presence and filling of the reservoir raised, not lowered, water levels around the reservoir, and that even that effect did not extend very far outward into Tuscarora lands. Water sampling during the relicensing study indicated that contaminants in groundwater collected near the reservoir were not associated with the Niagara project," the authority said in an email to The Buffalo News.

Other nations, other choices

Other Indian nations have been able to provide public water while maintaining their sovereign status.

The Seneca Nation maintains public water systems on both the Cattaraugus Reservation in Irving and the Allegany Reservation in Salamanca, said Seneca spokesman Phil Pantano.

The Senecas buy water from the Erie County Water Authority for the Cattaraugus Reservation, and recently agreed to provide water to the Lawtons Water District in North Collins.

The Allegany Reservation uses water from the City of Salamanca system.

"That's not much money," Henry said in a phone conversation.

In November, supporters of the Tuscaroras, including some members of the nation, started a monthly water drive at the Niagara Falls Public Library. The next water drives at the library are on Feb. 20, March 20 and April 17.

"We've had some business owners donate money, and we take it and go to Tops," said Ken Cosentino, one of the organizers.

"We bring (the water) to Tuscarora Community Services. They have a list of residents who don't have clean water. They give it out with the food distribution. The list only serves those who are the worst off," Cosentino said.

Residents like Williams use test strips to make sure what comes out of their faucets is usable. But he remains reluctant to use it.

"I put it in my fish tank," he said, showing off a large tropical fish collection in his living room. "The fish are still alive."