Gabriel Dunn made no promises. The plaster sculpture by Selma Burke had been shattered inward, like a hollow piece of candy someone crushed with a fist. The damage was so revealing that Dunn could see how Burke, a celebrated 20th century sculptor, brought the work into being, how each layer of plaster had a slightly different color, how at one point she used hidden burlap to give the form some extra strength.

Much of the sculpture had been reduced to tiny fragments. It would have been easy to write it off, to say it was impossible to save. Two elements convinced Dunn, an art conservator in Buffalo, to give it a try.

The origin of the shattered piece was important unto itself. Burke was a significant and uplifting American sculptor, and the project involved everything Dunn sees as defining the notion of conservation, a term now considered more accurate in her field than restoration.

Equally important, Dunn understood why it mattered so much to Ellen Grant, a former deputy mayor of Buffalo and the owner of the sculpture.

"It was a family piece," Dunn said, "and I felt awful for her story."

At unDunn Art Services of Buffalo, Dunn repairs and conserves damaged works of art as part of her profession. She first saw the broken sculpture about three years ago. It is a tale that in both theme and resolution fits well with Black History Month, although Grant said the result is too big to be tied to any one month or event, that it is more about an aunt and her young niece, about faith and inspiration. 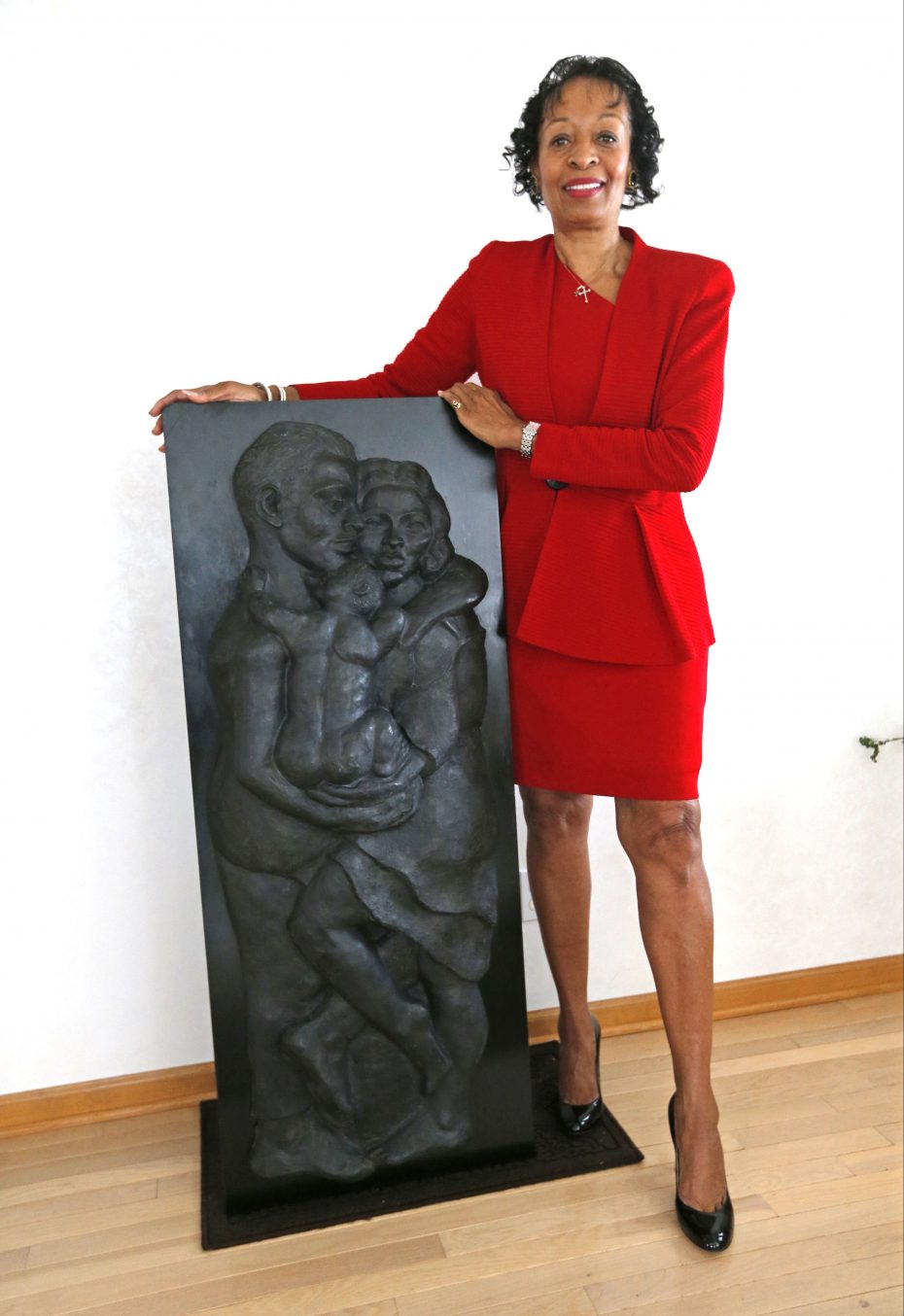 Ellen Grant in her Grand Island home with a restored relief sculpture by Selma Burke that once seemed beyond saving. (Robert Kirkham/Buffalo News)

For years, the sculpture belonged to Grant's aunt, Jane Burrus-Orry, who died a few years ago. It portrays a young African-American couple, the mother and father embracing while holding an infant closely between them. The piece carries the signature of Burke, a sculptor and pioneering  artist who was part of the Harlem Renaissance, a  geyser of black culture that burst out in New York about a century ago.

"She was an extremely important female sculptor in a lot of ways," said Lori Verderame, an art historian, author and appraiser who has authenticated and appraised Burke's sculptures for public museums and private collections.

While Burke is most famous for a 1940s bronze relief of President Franklin Delano Roosevelt – Verderame, like the Smithsonian Institution, credits Burke with inspiring the portrait of FDR used on the dime – some of her most striking pieces involved the strength and sanctity of the African-American family.

To Grant, that brings everything back to her aunt, who at some point in life purchased a relief by Burke.

"I remember seeing it as soon as I'd go into her house, when I'd visit when I was a teenager," Grant said. "It was right in her foyer, and right in your face."

Burrus-Orry, she said, "never had children. She married late and was widowed early." Born in Georgetown, S.C., during the worst of Jim Crow segregation – a time when professional opportunities were few for any African-American and fewer yet for black women – Burrus-Orry moved to New York City and forged a remarkable career.

She was an educator, an administrator whose focus was on children with special needs. Burrus-Orry was also a world traveler who'd casually go to Greece or Europe, Grant said. She was knowledgeable about the theater, as well as a discerning visitor to art galleries who collected many pieces, especially by African-American artists.

The Burke sculpture carried special meaning, Grant said, both for its message and the significance of its creator.

Throughout her adult life, Burrus-Orry took particular interest in her nieces and nephews in Buffalo. Grant, whose parents came from South Carolina, was the eldest daughter in a family of six. Her dad worked at Bethlehem Steel. Her mother was a homemaker. While her siblings all forged successful careers, Grant was the first one to earn a college diploma.

There was no doubt, she said, that her aunt's example played a major role. Grant recalled a girlhood visit to the South, how she walked into a store and was immediately confronted by a clerk, who ordered her to get out because she was black.

Legal segregation, harshly enforced, remained the norm. It was jarring reinforcement for a message that Burrus-Orry, raised within those constraints, shared with Grant too many times to count: "Don’t let the color of your skin ever hold you back from achieving any goal."

Grant listened. She graduated from Kensington High School, became a licensed practical nurse, returned to school to earn a degree in sociology from the University at Buffalo, then went on to earn a doctorate. She serves now as a strategic consultant for Say Yes to Education and the Weiss Institute, after a career that's included positions as deputy mayor and as Erie County commissioner of mental health.

It is hard for her to explain how much her aunt mattered in that family process. It began with Grant's parents, a couple who provided a foundation of love and stability, who made sure there were plenty of books and magazines around the house for their kids to read, whose sheer diligence offered a framework for how to succeed in life.

Yet Grant was also deeply influenced by Burrus-Orry. As a child from Buffalo, Grant knew little beyond her city neighborhood. That changed once she began traveling to Manhattan. Burrus-Orry would take her to Broadway plays or show her slides from her trips overseas.

"She helped teach me a sense of self," Grant said. "She believed in the idea that you never give up, that you provide service to others."

When Burrus-Orry died at 92, she left much of her estate to Grant, including the Burke sculpture. Grant intended to provide it with the same prominence in her own home that Burrus-Orry gave it in Manhattan. She entrusted the piece to a shipping company and paid standard insurance, but Grant speaks with sadness of a lesson she soon learned.

She'd never make that choice again with something so precious.

Grant was in Grand Island on day the truck arrived carrying a battered package, when the driver said to her, "Sorry, miss, but this appears to be broken."

The plaster was not just cracked; it was shattered. Grant looked at it and wept, wondering if it was irreparable. She called many experts who told her the piece was beyond help. Finally, she sought advice from the Albright-Knox Art Gallery, where a curator told her about Dunn, a West Seneca native who speaks of the almost spiritual idea of conserving works of art.

"You're creating in the hands of the artists themselves," Dunn said. 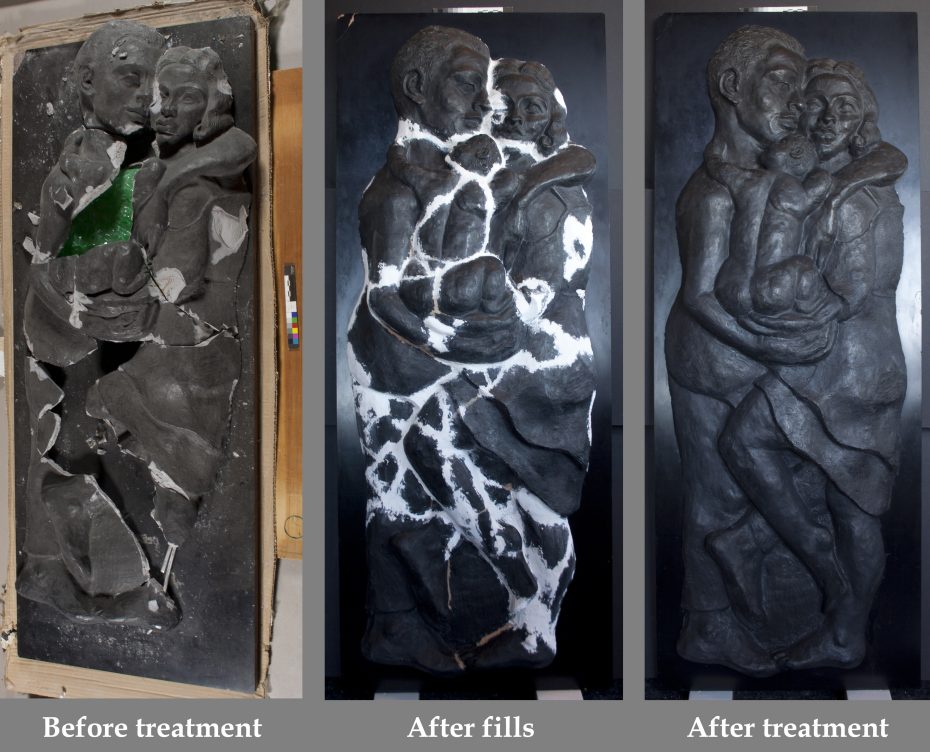 Still, Dunn admits she was uncertain when Grant showed her the sculpture. It had caved in upon itself, leaving countless shards. The entire head of the infant held by the couple had fallen inside the hollow interior.

"There were so many pieces," Dunn said, "and I didn't know if it would even be structurally sound enough to put on display."

She said she would do her best, that she would "pick at it" in a painstaking way, but the project might take a long time. Dunn's rate is $90 an hour, but to Grant it was well worth it. She was just glad to hear the repairs might be possible. Grant found something reassuring in Dunn's passion for the job, in her concern about the piece. 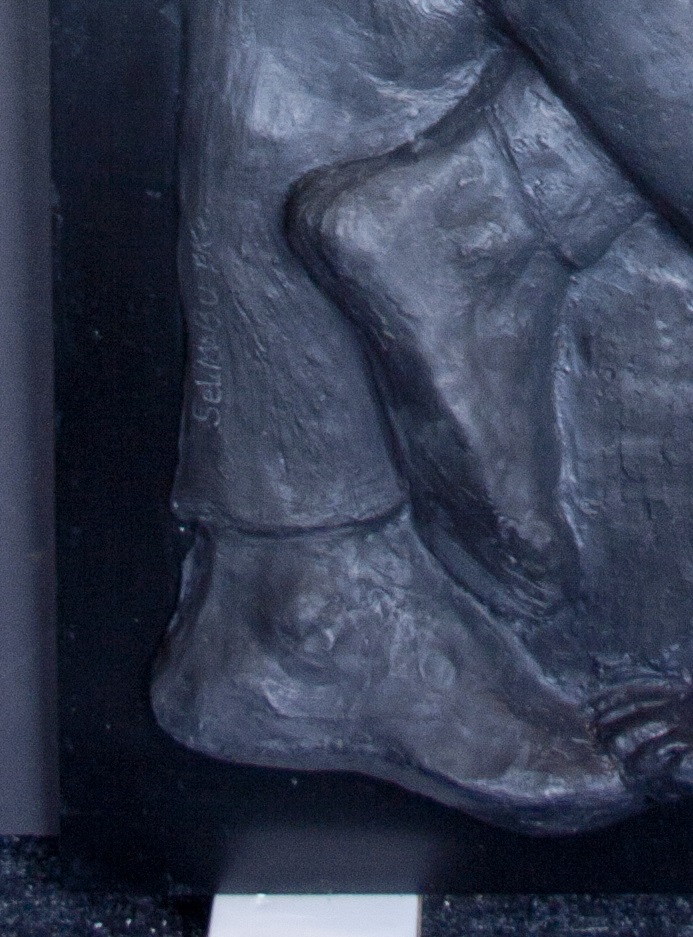 "I'd never done anything quite like that," Dunn said. It took two years of bottomless patience, hour after hour of working with plaster and adhesives to "make the artwork structural again, to make it safe again."

Finally, Dunn was ready to show Burke's sculpture to Grant. She packaged it – as carefully as you can imagine – then she and her boyfriend, Thomas Andersen, brought it to Grand Island, where Grant unwrapped the piece.

Once again, she started crying, but these tears came from joyous disbelief.

The sculpture, this plaster statement on commitment and family, had been strengthened in such a fashion that despite all the trials, Grant could not see a flaw.

It is exactly the way Grant recalls her aunt.