Construction of the proposed 23-story Queen City Landing residential tower at Buffalo's Outer Harbor may still be in legal limbo pending a court ruling, but an environmental cleanup of the site is poised to get underway.

Developer Gerald Buchheit's Queen City Landing LLC is proposing a broad remediation of the cleared 20-acre peninsula site at 975 and 1005 Fuhrmann Blvd., to clear it of pollution from urban fill and the use of petroleum products decades ago.

The cleanup would be performed and funded by Buchheit with oversight from the state Department of Environmental Conservation, which is now seeking public comment on the plan through April 1. If the cleanup requirements are met, Buchheit could qualify for lucrative state brownfield tax credits to defray the costs of his Queen City Landing project.

The Orchard Park businessman and his partner, Melissa Baumgart, want to construct a 370,000-square-foot complex with a glass-walled apartment tower and a three-level parking ramp. The $60 million project would feature 197 one- and two-bedroom apartments with balconies, plus two restaurants, a nightclub, an "infinity" pool and a fitness and wellness center. 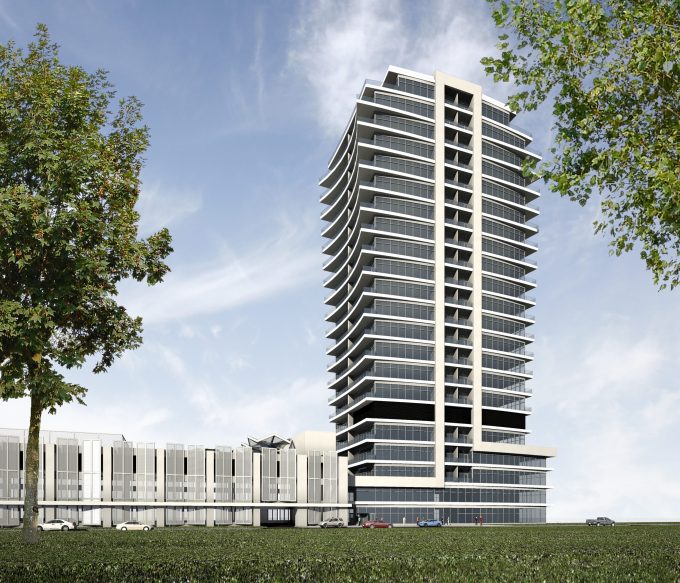 A rendering of the Queen City Landing project on Buffalo's Outer Harbor.

The plan was already approved by city municipal agencies, and the former Freezer Queen concrete warehouse on the site was already demolished in 2016. But preservationists, environmentalists and other opponents are still waging a fight in court to overturn the approvals and stop the project. Until a court rules, the construction project is on hold.

That doesn't stop the cleanup, though. The peninsula site that juts into Lake Erie was created between the 1920s and 1960s using fill material to provide shipping access to the Outer Harbor. A shipping terminal and later the Freezer Queen food manufacturing facility occupied the land from 1927 until the demolition.

Now, the rest of the plan calls for digging up and disposing of additional soil and fill from three areas found to have high levels of metals and various hydrocarbons. Crews would then install a "cover system" over the site, which would include the new building, asphalt paving, concrete walkways and a two-foot layer of new soil. The site would be maintained and monitored going forward.

The cleanup plan can be found at the Buffalo & Erie County Public Library's main branch downtown, or online at the DEC website.