Matt and the late Jean Piorkowski started the shop in 1963 at 937 Oliver St. Piorkowski was a singer and accordion player, displaying his talents on “The Lawrence Welk Show” and for a cardinal visiting Buffalo who would eventually become known as Pope John Paul II.

The shop grew through the years, selling, renting and repairing a multitude of instruments, as well as offering instrumental and vocal lessons. Matt and Jean’s daughter, Kathy Carr, eventually took over the business. An accordion player in her own right, as well as master bassoonist, she has become well-known in the area for her jazz vocal talents, too.

Kathy’s son, Zachary Carr, grew up in the business, as well, leaving his native North Tonawanda as a teenager to study in New York City, which included an internship at Carnegie Hall. He returned to the shop to teach voice on a part-time basis in 2011, not sure which direction it would take him.

That move has taken the 29-year-old – and the family shop – to new heights.

“We are planning a 2,600-square foot expansion to our building and we hope to be finished by the end of this year,” Carr said. “We’re going to break ground either this spring or summer right here on Oliver Street, on a lot we own next to the shop. We’ll have a vocal studio, recording booth, small stage, sound equipment and lights. It will be state of the art – a complete musical performance complex. I am beyond excited that we will be able offer our customers a facility that they deserve.”

“We have 30 to 40 teachers overall,” Carr noted. “Hundreds of families come through the shop each week. We have a wonderful community that supports us and we are returning that support by investing in them, with the hope that we will be here for another 54 years to come. We feel blessed and are so grateful to Western New York for their love and support.”

When Carr joined the teaching staff at the shop in 2011, there were around 30 vocal students. Today, he and his staff of four other instructors teach 123 vocal students.

“Our vocal students range from a four-year-old, who takes voice and piano, to one student of mine who is 78,” he said. “We have a lot of middle and high school students, as well as college students and adults – it’s an eclectic gathering of talent. And our students come from areas like Ellicottville, Amherst, Clarence, Niagara Falls and Lockport. Students generally take an hour lesson per week, but some take up to three classes per week – those would be the ones on our competitive team.”

The Matt’s Music Vocal Performance Team was founded three years ago and competes in venues up and down the eastern seaboard under the tutelage of Carr, Kimberly Potfora, Stephen Piotrowski and Cortney Costanzo.

“We have a fantastic coaching team and they are an integral part of what we do,” Carr said. 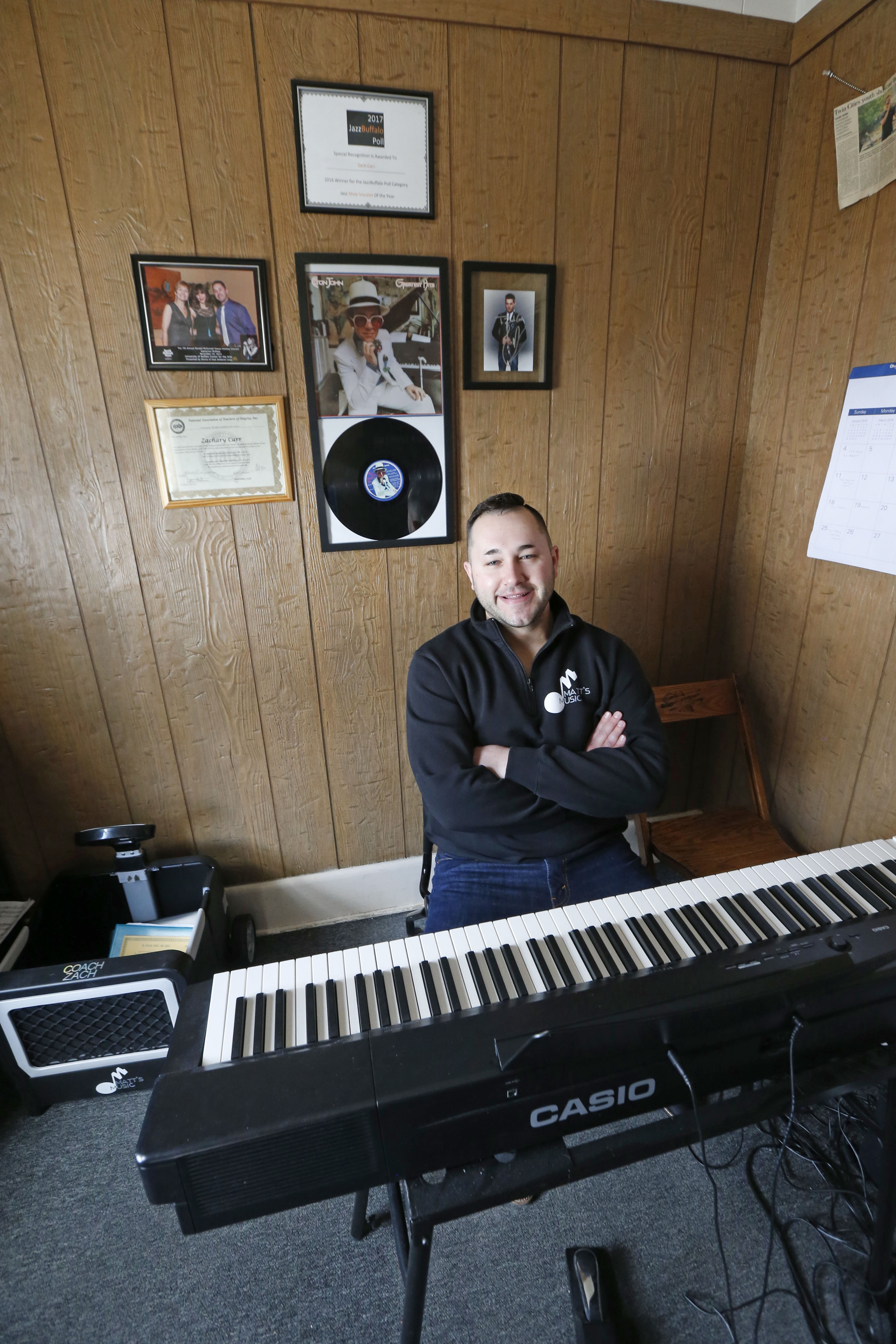 Zach Carr sits in one of his favorite teaching rooms at Matt's Music. Carr's grandfather started the shop, his mother is now the owner and he has taken over the vocal department.  (Robert Kirkham/Buffalo News)

The team includes 27 students, ages 9 to 18, who perform as soloists, in small groups, or as a complete ensemble. Members must compete in at least three activities throughout the year.

The national competitions allow the singers to gain “more exposure to the complexities of performing and overcoming anxiety, and learning how to master extra variables, like the utilization of proper microphone technique,” Carr stated.

Ten team members qualified for the 2017 American Protege Vocal Competition held in December at Carnegie Hall – a thrill for any performer.

Lisa Gellerson’s daughter, Regan, is a Starpoint freshman and team member who performed at Carnegie.

“As a parent I will be forever grateful to the vocal coaches at Matt’s Music for the opportunities that they have provided my daughter,” Gellerson stated. “They have played a significant role in not only helping her grow not simply as a vocalist, but socially and emotionally as a person, as well. The coaches are selfless with their time and are role models and an inspiration to all of their students.”

The team also performs locally and is planning its next performance from 7 to 9 p.m. March 19 at the Hard Rock Cafe in Niagara Falls. The singers do extensive community service, too, performing in such venues as area nursing homes.

Carr, himself, is an accomplished performer, having just been named the JazzBuffalo Poll Awards’ top jazz male vocalist for 2017 and was Artvoice's top male vocalist in 2016. He performs throughout the area, as a soloist and in a duet with his cousin, Jonah Krull. They will perform at 8 p.m. March 17 at G-Mac’s, 5894 Ward Road, Sanborn. He will also perform with fellow Matt’s Music teachers Piotrowski and Potfora at 7 p.m. Feb. 24 at Daily Planet Coffee, 1862 Hertel Ave., Buffalo.

“Jazz is where my passion lies,” he said.

But Carr also leads an entirely different, academic life, as a third-year doctoral student in the University at Buffalo's Department of Communication. He recently took some time to talk about his musical life, his academic life and how he’s managed to blend the two while furthering his family’s musical legacy.

Q: What is the next competition for the team?

A: The students will be entering video submissions for the first and second round of the Featured International Singing Competition and the third round will be held in New York City April 22. Last year, six of our students took first place across all genres and we are keeping our fingers crossed for a repeat performance.

Q: Why are these competitions important?

A: Our students get to perform in every type of scenario. We are training them to be the most complete performers they can be. Each competition helps to bolster their confidence, and further their overall performance comfortability.

A: After I graduated from Niagara Catholic High School, I went to Concordia College in New York City for vocal performance. I interned with Manhattan Concert Productions at Carnegie Hall and performed there three times. It was simultaneously the most humbling and exhilarating experience ever. I was 19 at the time and I had never sung anywhere outside of North Tonawanda. I took in every single moment and appreciated that I was sharing the stage with the world’s greatest musicians.

But it’s been an even greater thrill to return there 10 years later with our students.

Q: How did you find your way back to Matt’s Music?

A: After being in New York for three years, I came home. I was at a crossroads as to what do do as a performer. I had also studied vocal performance at the Eastman School of Music in Rochester. It was 2011 and I returned to UB to resume classes and I approached my mom about becoming a part-time vocal teacher. There was just one other vocal teacher here at the time and about 30 students. Then it was just me teaching alone for a couple of years.

That’s when I really fell deeply in love with coaching voice. It just really called to me and I started to formalize the vocal program at the shop. I really had a melting pot of techniques from all of the teachers I had studied under and in 2013, we started to do things a little differently here.

We had been a family-run business with sort of a part-time feel and I hired one of my former students, Kim, and then Stephen, whom I met when we sang with Buffalo Chips and I knew him from UB, too. Since their addition, the program has been growing exponentially.

We are teaching kids how to be better performers and giving them the opportunities to do this that they might not get anywhere else. We are a family-run music store with top-level talent and we are defining that every day. Our students are our family – that’s our motto and our number one focus always, that each and every student feels Matt's Music is their second home.

Q: What is your work with the Department of Communication at UB?

A:  I am a third-year doctoral student in nonverbal communication at UB and I also teach and do research at UB. I think my music and academic lives fit together nicely. I am so truly grateful for my mentors at the University at Buffalo, particularly my adviser, Dr. Mark Frank. He has changed my life dramatically.

I study human behavior. I study facial expressions and hand movements and I’ll finish my degree in spring 2019. With my studies, I think I can help my vocal students become better performers, more convincing storytellers and this can help our students become the best performers they can be.

I love everything I do. It’s tiring at times, but it’s such fulfillment on the deepest level, therefore finding the energy to keep going is never too hard.

These last three years have opened my eyes to the beauty of what we’ve created here.

Q: Your mother runs the shop now, but is your grandfather still involved at all?

A: Not now, he’s 83 and happily enjoying his retirement. But he told my mother last month that he never really dreamed of taking the shop bigger than this one building. When he and his wife started it, he was a musician and the shop was part-time. We’re taking it to the next level, trying to do something different here for North Tonawanda and for Western New York. This is an incredibly satisfying continuation of my grandfather’s legacy.