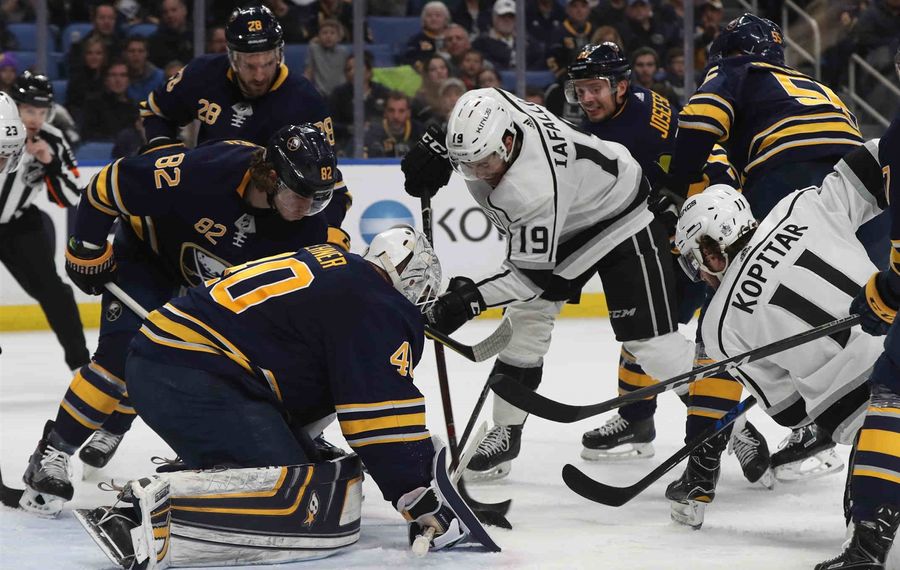 After practice here Friday, Alex Iafallo said Feb. 17 was one date he had circled when he looked at the Los Angeles Kings' schedule. It was pretty easy to see why Saturday.

As the Eden native took the ice in KeyBank Center, the Zamboni end of the rink was full of black-and-silver clad fans. "Eden loves Iafallo" read one placard against the glass, with a heart substituting for the world "loves". A comedian in the crew even plastered several 8 1/2 x 11 head shots of Iafallo against the glass.

"It's a pretty amazing feeling," Iafallo said after the Kings' 4-2 victory over the Sabres. "Seeing in warmups all the support was pretty special. Especially coming here as a kid with my parents and sister coming to games, it's a special feeling.

"We had a quick practice yesterday, I stepped on the ice and it gave me a lot of goosebumps. In warmup too. You always dream of playing in your hometown and seeing everybody in the stands."

Two buses full of Iafallo's family and friends came to the game from The Towne House, the Hamburg pub run by his father, Tom, that's been family owned since 1962.

His parents, however, were not in the house. That's because Iafallo's sister, Julianna, was having her senior day in Columbus, Ohio, with the Ohio State women's hockey team. Alex Iafallo said Friday he agreed with that decision because it was Senior Day.

Tom Iafallo even tweeted Saturday that both of his kids got an assist. Julianna notched one in Ohio State's game against Bemidji State and Alex fed Anze Kopitar for a second-period goal that put the Kings up, 3-0.

Juls with an an assist too today pic.twitter.com/cFUiL8nRoL

Iafallo's parents were not at his first meeting against the Sabres either, the 4-2 victory by the Kings over Buffalo on Oct. 14 in Staples Center. They had traveled West the previous week to see the season opener and his NHL debut, a 2-0 win Oct. 5 over Philadelphia.

Iafallo played 18:29 in the first meeting with Buffalo, registering three shots on goal, but did not have a point. He played 16:45 Saturday and had two shots on goal in the game.

On the goal, Iafallo got the puck from Dustin Brown to the right of Sabres goalie Robin Lehner and found  an open Kopitar in the slot.

"Nice play by Brownie to give me the puck and I just had to give it to Kopi," Iafallo said. "I got the assist there and one of my buddies is in the corner right by the Zamboni door. I looked at him for a second and it was pretty cool feeling."

Iafallo has six goals in 56 games this season. The assist was his 14th of the year and his 20th point.

After the game, the Iafallo clan gathered in Sections 113 and 114 to greet him and wish him well as the Kings headed to the airport for Chicago, where they will meet the Blackhawks on Monday night. The crowd rivaled any that observers have seen over the years waiting for South Buffalo native Patrick Kane.