The Atlantic Hockey standings are tight as Canisius and Niagara move closer to completing their conference schedules. 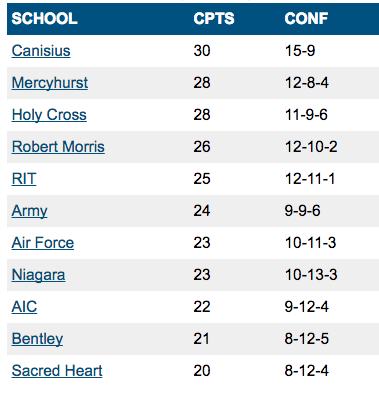 Tiebreaker information for Atlantic Hockey is hard to find online, but here's what the league sent in response to an inquiry:

In the case of ties among three or more schools, the criteria will be used in order until a team or teams, are separated from the pack. At that point, the process will begin anew to break the “new” tie. In other words, when a four-way tie becomes a three-way tie, the three-way tie is treated as a “new” tie and the process begins with the first criteria.

These tiebreakers bode well for Canisius, which has a two-point lead on first place with four games remaining in the regular season (though the Griffs will be without two top players this weekend). Canisius split with second-place teams Mercyhurst and Holy Cross this year, as well as fourth-place Robert Morris and fifth-place RIT. Canisius has a big lead in conference wins.

Canisius' main threat is Mercyhurst, since Holy Cross has two fewer games remaining. That makes the Griffs' "magic number" six points, meaning they'll clinch first place with a combination of six points earned by them or dropped by Mercyhurst. For example, if Mercyhurst finshed 3-0-1, it will have dropped one point with the tie, meaning Canisius would need five out of eight possible points in its final four games to lock up first place.

Niagara, on the other hand, would really like to get into the top five – which would guarantee it a first-round bye in the playoffs – but it faces an uphill battle to do so with only two games remaining. The bottom six teams play a pre-quarterfinal round the first weekend in March; if Niagara is one of those teams, it would at least like to be seeded sixth through eighth so it can host the best-of-three series before going on the road for the quarterfinals.