The Hamburg senior won his fourth consecutive title in the 200 IM, leading throughout and pulling away at the end to finish with a time of 1:57.10, on Friday at the Section VI boys swimming championships at the University at Buffalo’s Alumni Arena Pool.

The Canisius-bound Maurer also repeated as the 100 breaststroke champion in 53.94. He’ll return for a fourth straight year to the state championships March 2-3 at Nassau County Aquatic Center on Long Island.

“It’s been crazy,” said Maurer, who’s been swimming for 13 years. “It’s been a ride and it’s flown by so quickly. The last four years have been the best years of my life.”

Winning a swim title every season of a high school student’s career is a rare feat, according to Hamburg coach Andy Godios.

“He’s a guy who steps up to his competition,” Godios said. “He faced guys who were good competitors and that helped Michael to get his best time of the season in the IM.”

It was a big night for Hamburg as the team’s several year reign of dominance at the competition continued. The Bulldogs won five times on the evening, with senior Liam O’Connell earning a pair of titles in the distance freestyles and earning the Swimmer of the Meet honor while the 200 freestyle relay added a championship. At this meet last year, Hamburg won six times.

“When the season started I thought there was no way we’d win six titles again, but on the drive here I was talking to the boys and thinking, ‘We absolutely could win six,’” said Godios, whose team came up just short of doing so, finishing a close second in the final race of the night – the 400 freestyle relay.

Joining Maurer and O’Connell as a double winner Friday was Kenmore’s Benjamin Harper. The junior earned sectional titles in the sprint freestyles, despite being the second seed in both races. He just outreached Williamsville East senior Bryan Hong to the finish line of the 50 freestyle to win in 21.36 and then took the 100 free in 48.00. He’ll make his first trip to the state championships.

“I wasn’t seeded first like I would have liked to have been but coming back to win the races feels pretty good,” Harper said. “I couldn’t let being the second seed take me down; I just had to swim my race and just go for it.” 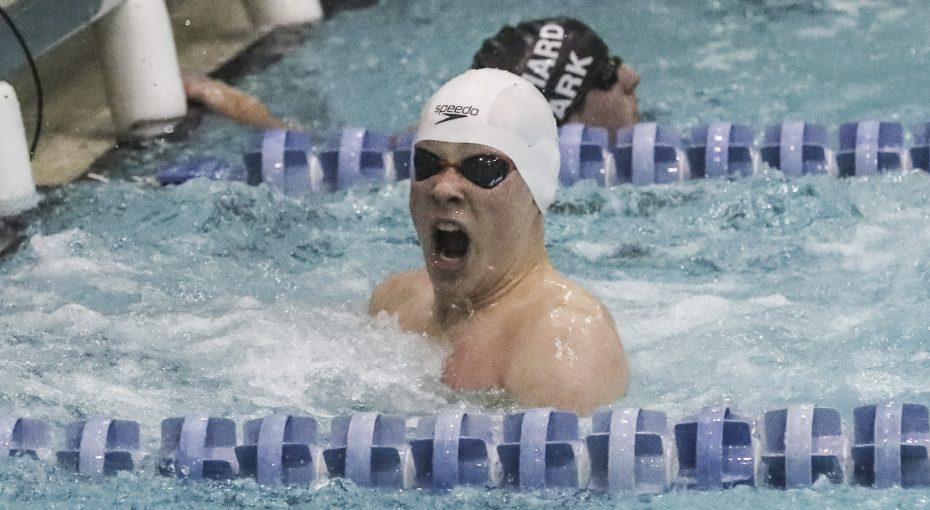 Williamsville East started the evening with a win in the 200 medley relay and ended it with a title in the 400 freestyle relay. Michael Clough, Andrew Clough, William Eaton and Hong broke Hamburg’s three-year run at the top in the 200, with a 1:38.22, and then edged the Bulldogs in an entertaining 400 in 3:16.04. East broke a 21-year-old school record in the 400 free relay by more than three seconds. Hamburg finished in 3:16.57.

“This was nice but we want to do even better at states,” East coach Mike Doerfler said. “I knew somebody would step up in the 400, but I didn’t think the race would run quite that fast.”

O’Connell squared off twice in the freestyle distance races with Williamsville East’s Andrew Clough and both times edged the freshman, despite losing to him during the regular season. The senior passed Clough in the final lap of the 200 freestyle to win in 1:42.50 and then pulled away mid-race to repeat as sectional champion in the 500 with a 4:42.64.

“Andrew’s a great swimmer, so coming into the meet we knew Liam had his work cut out for him,” Godios said. “But Liam, the way he trains and works, he likes the challenge and he stepped up to the challenge to get the wins.”

Lockport sophomore Mark Crocker just beat out last year’s champion Michael Clough, the Williamsville East senior, in the 100 butterfly, finishing in 52.38, and Kenmore junior Matthew Walker swam to a title in the 100 breaststroke with a 1:00.23.