Buffalo Niagara Waterkeeper has a track record of restoring shorelines and watersheds. Now, in Niagara County, it has gone one step further: helping to put land under the control of a town.

The Town of Niagara last week acquired the title to 30 acres of forested land near Niagara Falls International Airport.

By owning the property, a partnership between Waterkeeper, the town and the Western New York Land Conservancy will be better able to secure funding for an ecological restoration project.

It's one of a few times Waterkeeper orchestrated a land transfer for ecological conservation or restoration. In November 2015, the organization helped Erie County obtain 222 acres of forest land at the headwaters of Eighteen Mile Creek in Concord.

The project aims to:

Officials hope the project becomes a catalyst for more – and larger – restoration efforts along Cayuga Creek.

“It’s a great opportunity to get a big win done early,” Gould said. “Cayuga Creek is an extremely important waterway to Niagara County.”

Though it’s just one relatively small piece of property, environmental advocates look at the land transfer as a beginning toward fixing a tributary to the Niagara River that has been plagued by excess stormwater and chemical contamination and sewage overflows farther downstream.

“What happens in its watershed affects everything downstream,” said Jajean Rose-Burney, the Western New York Land Conservancy’s deputy executive director. “The Niagara River is one of the most important waterways in the world.”

Residents at the Cayuga Village mobile home park told The Buffalo News Tuesday the transfer of ownership gives them hope.

“They’ve been trying to the improve this since I’ve lived here,” said Doug Neumann, a Cayuga Village resident of 15 years. 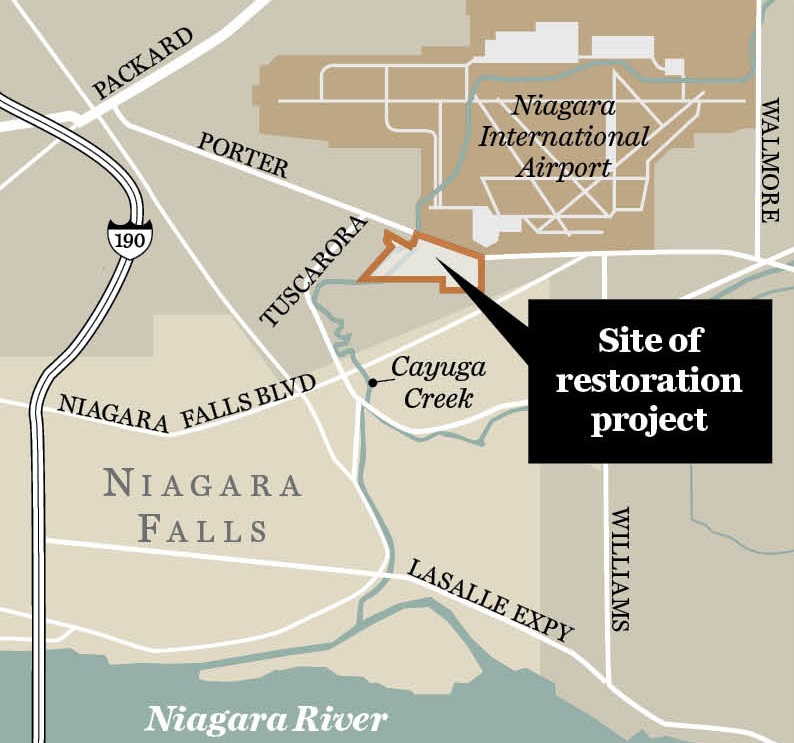 Neumann and others complain every spring and during heavy rainstorms. Portions of the mobile home park flood. Some complain their homes fill with feet of water.

It happens when stormwater from impervious runways and land at nearby Niagara Falls International Airport heads into the narrowly channeled creek that quickly becomes overwhelmed.

Rising creek waters flow over the banks at a sharp turn near Cayuga Village. It also affects residents on Disney Drive and other downstream neighborhoods.

Neighbors believe the owners of the mobile home park have done what they can – cleaning out stormwater receptacles and installing a metal sheet-pile retaining wall to keep Elderberry Place from eroding into the creek. They're encouraged by Waterkeeper’s plans for the site.

“I think that will probably solve the whole problem,” Neumann said. “So, I’m looking forward to that.” 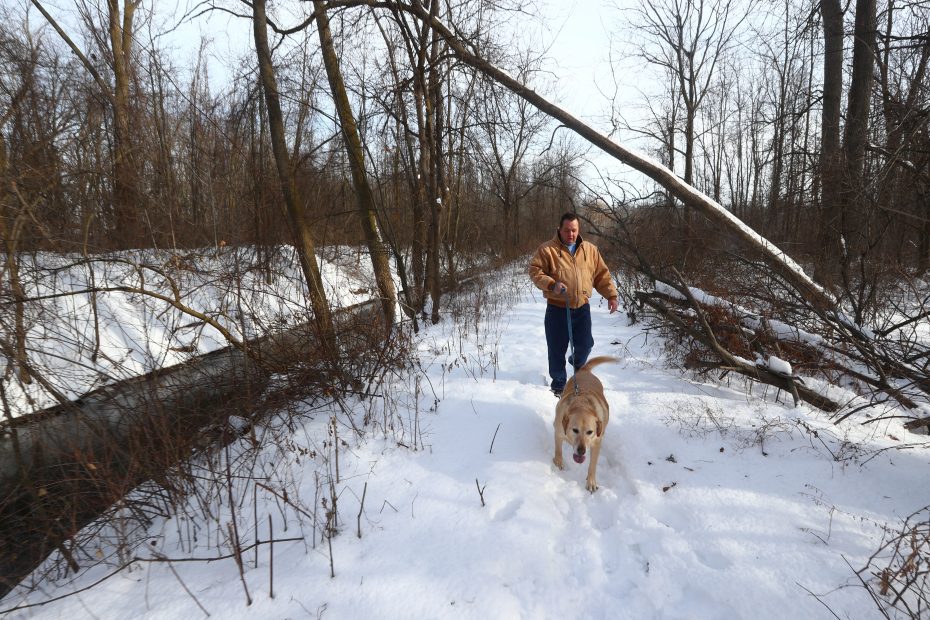 Doug Neumann, a resident at Cayuga Village in Niagara Falls, which floods in heavy rains, walks his dog, Titan, on 30-acre parcel of land that the Town of Niagara recently acquired that adjoins Cayuga Village. (John Hickey/Buffalo News)

Gould said the land was previously surveyed for contamination by the state Department of Environmental Conservation.

The DEC found a small portion on the north side of the site contained buried materials from a former Buffalo Avenue industrial fire. The remnants – including building materials and fly ash – didn’t significantly exceed state thresholds for contamination. It’s possible that spot could just be paved over and used as a future parking lot, Gould said.

Waterkeeper said the property “is one of the few remaining properties of its size and type in the Town of Niagara and is considered to be of exceptional ecological value due to the relatively rare forested wetland habitat along the northern border of the property.”

Waterkeeper said that habitat is home to amphibians, birds, reptiles and mammals and believed to also contain significant plant species as well, including the shellbark hickory tree and closed bottle gentian flowering plant.

A portion of the $575,000 that has already been raised will enable Waterkeeper to draw up designs this year.

“We see this as a key community issue,” Gould said. “We want to make this a very community-driven project.”

Its designs are expected to include restoring Cayuga Creek’s natural channel, which was altered in the 1970s.

Waterkeeper intends to reconnect the stream to its floodplain, which could include about 10 to 12 acres of wetlands and restore about 1,500 linear feet of shoreline. Gould said the project, when completed, will also improve water quality, improve the functionality of the stream and create breeding habitats.

What’s more, officials said it could also include a natural space with a recreational trail for hikers, birders and other visitors.

It will launch the restoration design phase after a public announcement of the property closing, expected in early spring. Construction is scheduled for 2019.