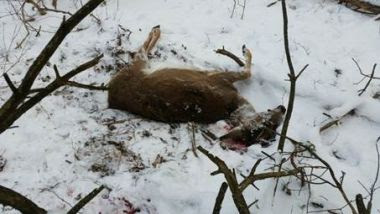 This doe was illegally killed by two men in Concord on Jan. 30. (State Department of Environmental Conservation)

Two Concord men who allegedly shot a doe from a pickup truck they were riding in last month face a variety of charges, the state Department of Environmental Conservation Police reported.

Authorities said the two men, who were identified as Daylin Holt, 28, of East Concord, and Ryan Simmons, 28, of Springville, allegedly shot the deer Jan. 30 in Concord.

DEC Officers Timothy Machnica and Mark Mazurkiewicz found a doe carcass about 60 feet off of a roadway along with an open can of beer.

Holt and Simmons were charged with illegally taking a wild deer, taking wildlife from a public highway, possessing a loaded firearm in a motor vehicle and discharging a firearm on a public highway.

Both men face fines up to $5,374 and a revocation of their hunting licenses at a March 5 hearing in Concord Justice Court.