Annette Bening will never be better than she is in Paul McGuigan's film "Film Stars Don't Die In Liverpool." Hers is, absolutely, one of the great female film performances of 2017.

It's a tragedy, therefore, that this year's Oscar category for Best Actress couldn't find room for her. A  plausible argument has long been that her ultra-high profile marriage to Warren Beatty has often outshone her extraordinary talents as an actress. For those who can't help lumping their fortunes together, it clearly didn't help last year when Beatty was the key figure in the announcement of the wrong winner for Best Picture.

Bening is magnificent in "Film Stars Don't Die in Liverpool." But then think of how often she's been great - "The Grifters," "Bugsy" (to Beatty, playing Bugsy Siegel: "why don't you go jerk yourself a soda?"), "20th Century Women," "The Kids Are All Right."

She plays Gloria Grahame here in an adaptation of Peter Turner's memoir/novel of his May-December romance with Grahame when she was almost 30 years older and dying of cancer. Everything about the film is deeply affecting, not least Bening's tremendous performance as Grahame, who was 57 when she died. (Bening will be 60 in late summer.)

This is not a perfect impersonation a la Rich Little. An attempt to do that would have been tortuous and doomed. Grahame was an Oscar-winning actress ("The Bad and the Beautiful") sometimes known for appearing in huge films ("Oklahoma," "The Greatest Show on Earth") but mostly for some of the greatest films noirs of all time ("The Big Heat," "Human Desire" and "In a Lonely Place"). The offstage scene in which Lee Marvin in Fritz Lang's "The Big Heat" permanently scalds her face with boiling coffee is one of the most horrifying in American movies.

It would have been both foolish and fruitless for Bening to attempt replication of Grahame's delivery. Plastic surgery had left Grahame with a near-paralyzed upper lip - a forerunner of "botox effect" - and a bit of a lisp. In the film parlance of the time, it oddly contributed to making her sexy. In a telling scene, her young lover asks her if anyone has ever told her she smokes just like Lauren Bacall. She answers, yes, Humphrey Bogart--and she didn't like it then either. 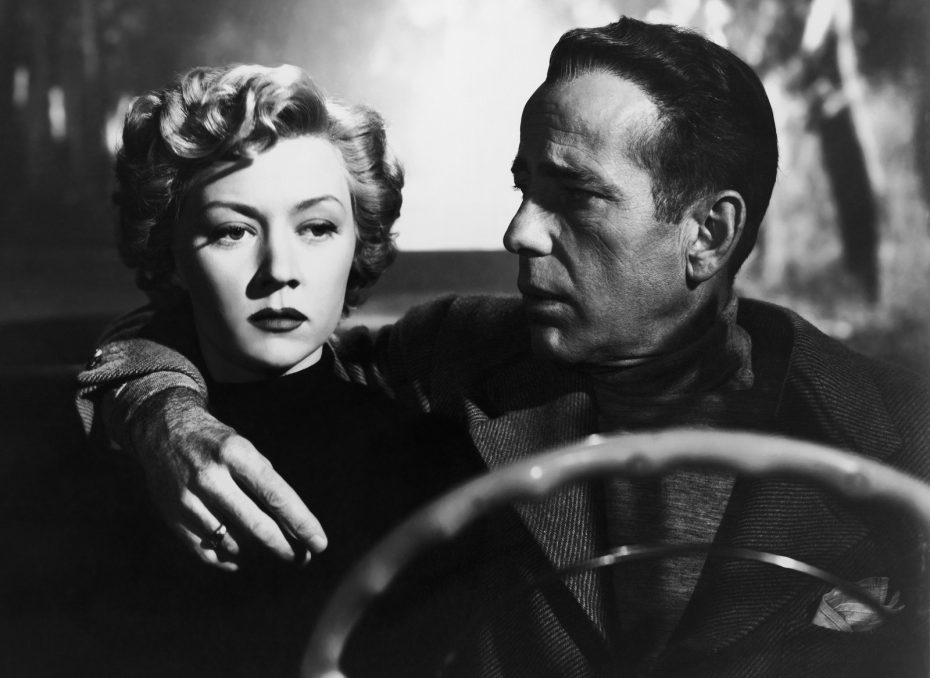 Gloria Grahame, the subject of "Film Stars Don't Die in Liverpool," starred with Humphrey Bogart in the 1950 film noir "In a Lonely Place."

The story begins in 1981, just as she is reduced to appearing in live theatrical performances in Liverpool. Her major film reputation is long gone. She had fallen into cheap horror movies attempting to copy the gargoyle aging-actress freak shows that revived the careers of Bette Davis and Joan Crawford. (I reviewed "Blood and Lace" in 1971. It was sad indeed.)

She is staying in a theatrical rooming house. That's where she falls in love with the family's son (Jamie Bell, who, as a child played the title role in "Billy Elliott"). The whole family is warm and generous and a tiny bit starstruck.

Bening suggests Grahame's unique delivery without attempting a perfect copy. She is much more devoted to the tale of a faltering actress trying to live to the hilt while hiding her breast cancer from the world and falling for a man three decades younger.

Right about here, it must be mentioned that Grahame's biography is one of the oddest in movies. In an early forerunner of Woody Allen's life, she was married to director Nicholas Ray ("Rebel Without a Cause," "In a Lonely Place") and, years later, also to her stepson Tony Ray. It is an accepted tale in her bio that her relationship with Tony probably had begun when he was 13, which caused her divorce from the boy's father.

What we're watching in this movie, it is nothing but touching. It is untouched by the sordid.

Her era was the 1940s and '50s. What we're seeing is the era of "Alien," a movie her love takes her to. But she is deluded enough to think she could still play Juliet on the stage. The scene where her young actor lover gives her the chance is one of the great tearjerkers of the past year.

So is her ultimate fate, where you will find out how unutterably sad is the film's title.

This is a rather wonderful little movie in which one of our greatest actresses gets to show how creative and determined she can be even though few ever seem to put her in the Meryl Streep class. This movie shows you that she belongs there. That's why one one of its cast members - playing Grahame's acting teacher mother - is the great Vanessa Redgrave, a lifelong resident of that class of actress.

An Oscar nomination would have been nice. Just see the movie. It will be more than enough to tell you all you need to know about Annette Bening.

Three and a half out of four stars