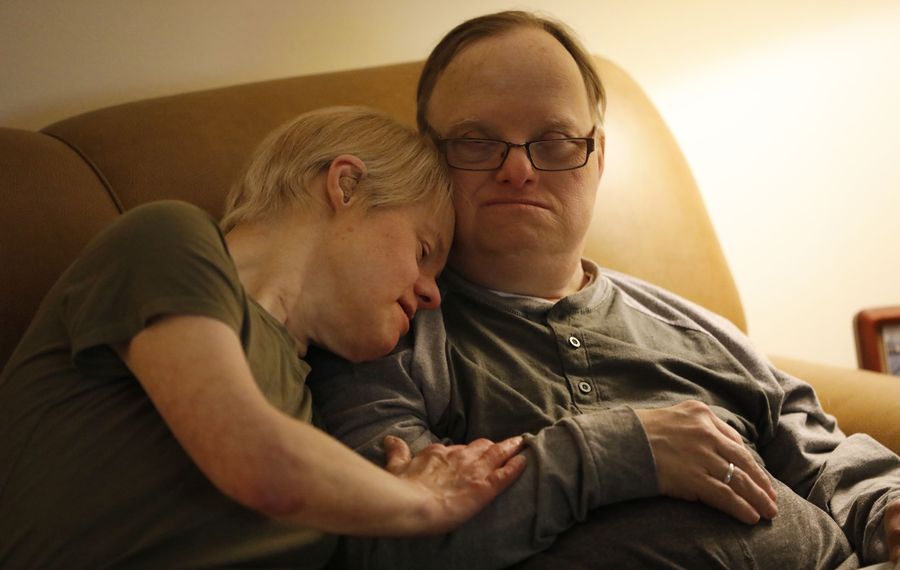 For years, Kris Scharoun-DeForge had a Valentine's Day routine she celebrated like clockwork with her husband, Paul.

She would always have a card – one of the elaborate ones she prefers to make by hand, cards she often creates for those she loves – waiting for him once he came home from work.

Kris, 58, enjoys cooking. Paul loves her pasta and just about everything she makes. Yet on Valentine's Day they would go out and eat, maybe at Red Lobster or Olive Garden, maybe at someplace as basic and comfortable as their beloved Subway.

"He opened up my world," Kris said at their apartment in Liverpool, a Syracuse suburb, where she kept one arm  around Paul's shoulders during a conversation.

Their Valentine's Day gift this year is a little different, but those who love them say it could have deeper meaning. Paul and Kris were born with Down syndrome. Their marriage, which will reach 25 years in August, is a quiet and monumental symbol of advances in civil rights for the disabled.

To understand what they've built together, a recent article in the Independent said the longest known marriage in the United Kingdom for a couple with Down syndrome is 22 years. Paul and Kris, who have dealt with all their obstacles and struggles as a team, are about to hit their silver anniversary.

It comes amid a new series of trials, a challenge intertwined with many Down syndrome marriages of long duration. Paul, 54, is coping with early-stage dementia, an illness that affects many with his condition at a relatively young age. 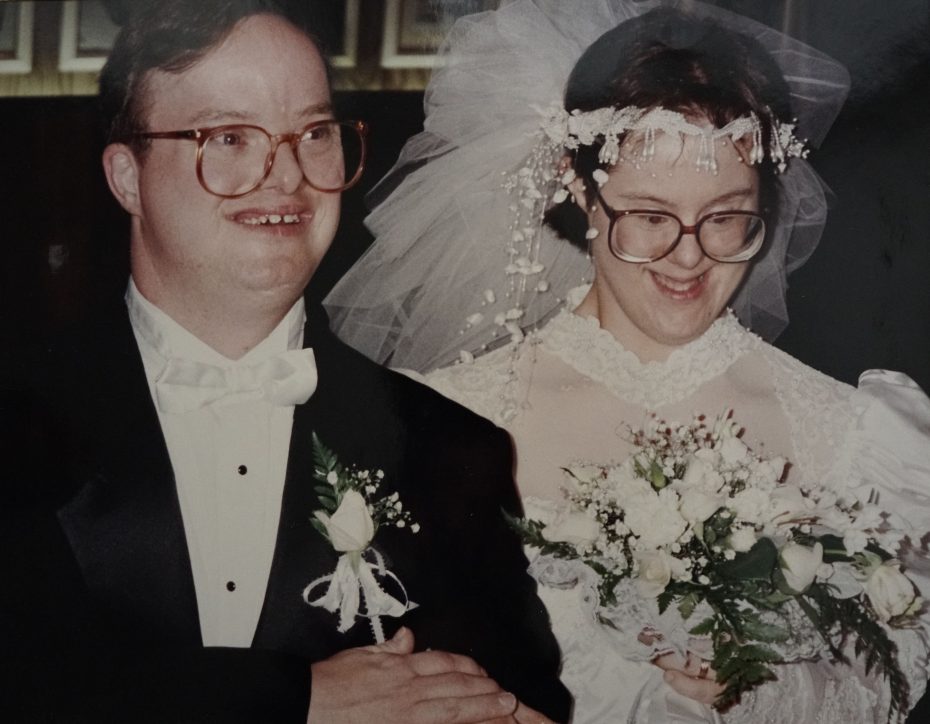 Paul and Kris Scharoun-DeForge on their wedding day, 1993. (Family photo)

A year ago, according to Kris' family, the couple learned that the state Office for People with Developmental Disabilities (OPWDD) wanted to move Paul into a community residence with intensive nursing care. Kris' sister, Susan Scharoun, calls it "a hospital house."

Scharoun is a psychology professor at Le Moyne College. Kris and Paul, she said turn over much of their Social Security benefits to OPWDD, which in turn provides many services, including rent. The state proposal from last year, she said, called for separating the couple. When Kris and her family objected, they say the state offered Kris the choice of staying with Paul in his new room.

To Kris and her family, that meant surrendering significant marital privacy and cooking privileges, as well as the rhythms and freedom of their own spacious apartment.

Susan Scharoun and another sister, Kay, went to work. They believe Kris and Paul deserve the chance to make the same decisions as any couple when one partner faces dementia. The Scharouns found an available apartment in another Syracuse suburb, one that is fully accessible for the disabled.

Paul often uses a wheelchair. One of the state concerns, the family said, involves growing difficulties for OPWDD staff workers — who provide around-the-clock support — in helping Paul in and out of the chair.

The new apartment has space for a lift, Scharoun said, making the task much easier. The family returned to OPWDD and suggested the accessible unit as a compromise. They weren't sure how state administrators would respond.

Friday, Scharoun said, Kris and Paul learned the state intends to put down a deposit on the new unit. That would keep the couple together, in their own place, until the moment — when and if – that Paul's health makes it impossible.

To Scharoun, who hopes the decision serves as a precedent, it's the absolute essence of Valentine's Day.

"We just believe we all have a commitment to serve them together, with dignity, for life," she said. 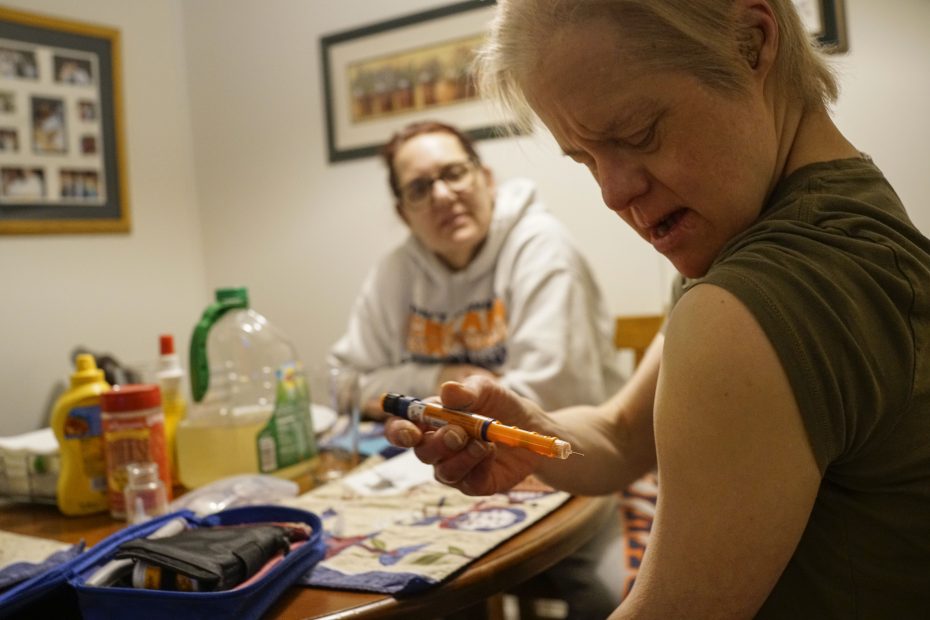 Asked about the decision, Jennifer O'Sullivan, director of communications for the state OPWDD, said confidentiality regulations prevent her from commenting on individual cases.

"While we can't speak specifically about any person's supports and services, we can tell you that couples with developmental disabilities, just like any other couple, sometimes face hard decisions when it comes to aging, changes in health or lifestyle and long-term care," O'Sullivan wrote in an email.

The OPWDD, she wrote, "strives to provide supports in the safest living environment possible, based on each person's changing needs, while at the same time ensuring that personal bonds can be honored."

Within the extended families, the new apartment touched off a joyous reaction. "It will be easier for him to bathe, to move around," said Lorraine DeForge, Paul's mother.

She and her husband, Frank, now live in Florida. Decades ago, when Paul was a young man, they left that state for their native Central New York, aware that it offered a greater array of services.

Lorraine speaks with pride of her son's accomplishments. His seven brothers and sisters, she said, helped him adapt to life. Years ago, Paul mastered the bus service in Syracuse. In 2013, his work ethic, community service and selfless nature caused ARC of Onondaga, an agency that serves those with developmental disabilities, to name him "Person of the Year." 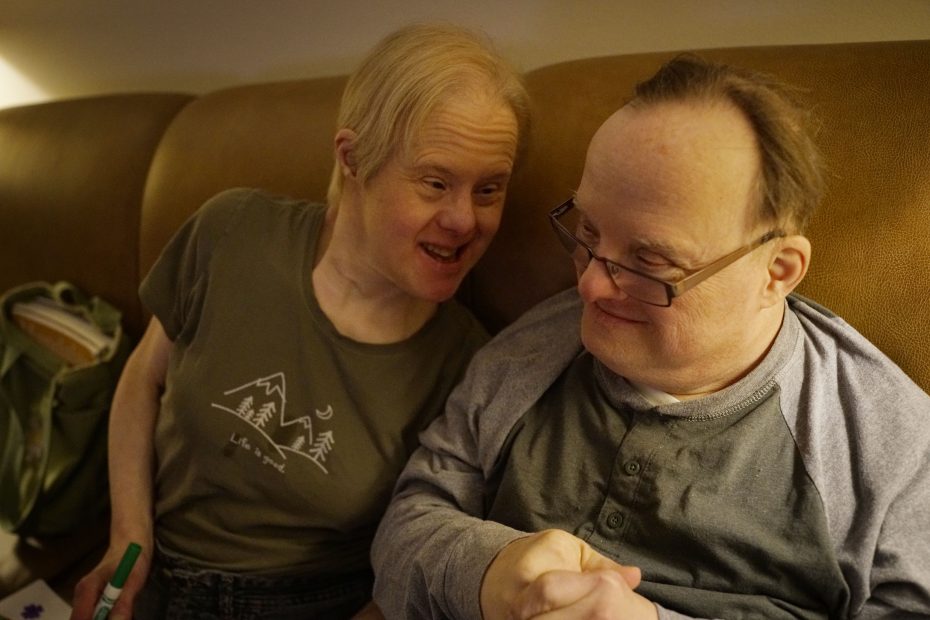 Kris and Paul Scharoun-DeForge settle in on the couch to relax at the end of the day. Born with Down syndrome, they've been married since 1993 and will soon celebrate their 25th anniversary. (Derek Gee/Buffalo News)

Lorraine remembered how some doctors told her "not to expect much" when Paul was born. Instead, he grew up to live a successful life that included a sequence of rewarding jobs — and a marriage now closing in on a quarter-century.

All of it led Lorraine to thank taxpayers who have financed state services for her son. She expressed gratitude for every staff worker with the state or ARC who has looked out for Paul.

"They've all helped him achieve so much," she said.

The decision regarding the apartment was greeted as an important progression by advocates for those with developmental disabilities.

"Marriage is a universal part of the human experience, and people have a universal desire to spend it with someone they love," said Erin Sobkowski, a lawyer and officer with 21 Connect, a group in greater Buffalo dedicated to educating the community about Down syndrome.

Sobkowski has 5-year-old twins, Evie and Jack. Evie, born with the condition, has already taught her parents a lesson that to Sobkowski explains the mortar holding together Kris and Paul.

"People with Down syndrome have an extraordinary and stunning capacity to love," Sobkowski said. "It is very true and very pure and comes without conditions."

Amy Monson, president of the Down syndrome Parents Group of Western New York, said the couple offers an uplifting example about the prospects for her own 12-year-old son, Jack.

"I can only hope he finds someone he loves, to share that kind of life," Monson said. 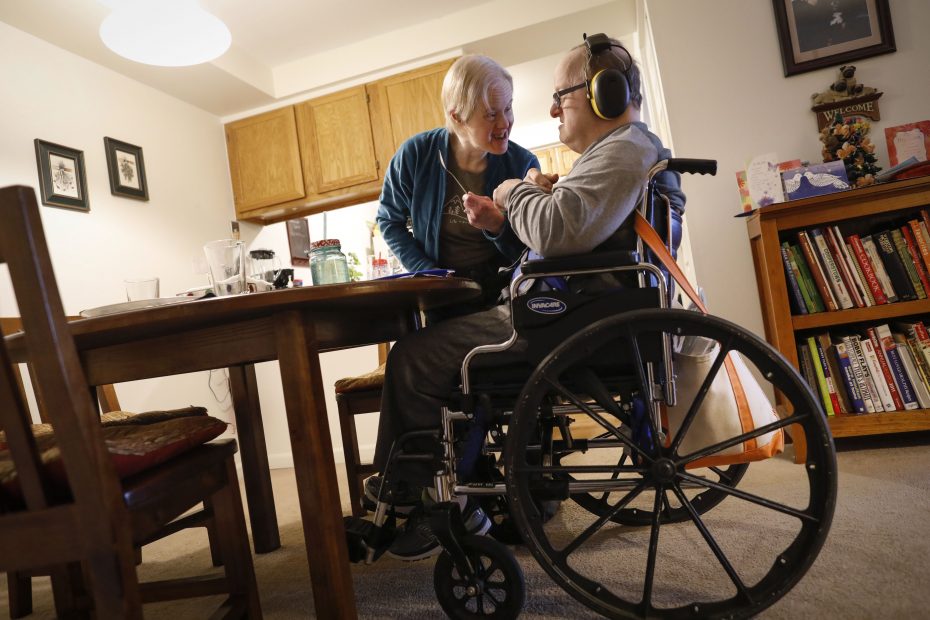 Kris Scharoun-DeForge engages her husband, Paul, while setting the table for dinner as Paul listens to music on his headphones. He listens to music each evening as one of his favorite ways to stimulate his brain, which helps slow the progress of dementia. (Derek Gee/Buffalo News)

Kris DeForge, for her part, never forgets the full meaning of her marriage. As a girl, in a culture that seemed to make her chances of being a bride all but impossible, she used to cut wedding photos from magazines and hang them on a wall.

While she speaks with passion of the support of her parents, she spent a year as a child in a state institution after her father died young and her mother became ill. "It was hard," she said quietly, recalling the sense of isolation.

Kris emerged to graduate from Liverpool High School. Then and now, she said, some people could be cruel. She still encounters the occasional stranger who makes casual and wounding use of the word "retard."

The truth is, those people are the ones who cannot see.

They cannot appreciate how Kris, a diabetic, has the courage to give herself insulin injections four times every day.

They cannot understand how Kris learned to be a skilled cook, or how she gets up in the morning to go to work in an OPWDD mailroom, or how the couple maintains a fierce allegiance to NASCAR driver Dale Earnhardt Jr.

They cannot imagine the instant of loving connection when Kris met Paul at a dance for the developmentally disabled, a moment leading to a romance, a commitment, that's never wavered.

They were married Aug. 13, 1993, in Syracuse, choosing to blend their last names together as one. Photos and mementoes from the ceremony hang on their bedroom wall. Paul's brother Jerry, a close childhood companion, was best man, the guy who handed over the rings, while Susan Scharoun was maid of honor.

As for Kris, she'd envisioned the moment since childhood. She and Paul offered traditional vows, including the "promise to have and hold, in sickness and in health."

Almost 25 years later, as Kris recalled that day, Paul reached out and took her hand.