Sabres fans really aren't that demanding. Give them effort, give them goals, maybe give them a win once in a while and KeyBank Center can become fun.

There probably weren't more than 11,000 in the house for Tuesday night's game against Tampa Bay, with the city's fans voting with their feet that they didn't care to see the NHL's best team -- even for the $6 you could spend for a ticket on StubHub -- because you'd have to watch them against the Sabres.

How can you blame the paying customers? Most of the best hockey this team has played this year has been on the road, where the Sabres have nine wins and have lost seven other games in overtime. Home has been for snoozing and losing.

Even after Tuesday's terrific 5-3 win over Tampa Bay, the Sabres are just 8-16-4 at home this season. They could be headed for the worst home mark in their history, which is currently the 11-19-9 record put together in 1971-72, the second year of the franchise's existence.

Not getting to 10 home wins in a season is pretty difficult. In fact, it would be historically bad.

At least the Sabres have already got that beaten. And you would think they'd find a way to get a couple more wins here the rest of the way to get to 10. It would be a good idea from the business standpoint. How many of these people are going to renew season tickets the way this year, and the last several have gone?

The way the Sabres played Tuesday, they would have beaten a lot of teams. Now, the Lightning hardly looked like worldbeaters in this one. It was clear they left most of their juice in Toronto, where they lost an absolute track meet to the Leafs on Monday night.

But the Sabres took advantage of that and the small crowd responded with lots of energy. No coincidence it came from what was taking place on the ice.

The Sabres put themselves out there plenty in this game to make plays. They're finally scoring and it's odd the goals are coming without Jack Eichel, which just shows you that maybe guys were standing around and watching the star too much and have now had to snap to it without him.

Buffalo killed off a 5-on-3 in the second period with a bevy of blocked shots against a vaunted power-play unit. There was a standing ovation from many in the crowd at the next whistle.

"That was awesome to hear," said Scott Wilson, who is making Phil Housley look foolish for the healthy scratches he's had to endure since arriving on the scene in December. "I'm glad that they were enjoying it. Any time a big team comes into the building, I know people are thinking whatever. But just that solid start of getting that first goal and getting the fans into it early was big."

Following the morning skate, goaltender Chad Johnson was musing how the Sabres seemed to feed off the energy in places like Calgary's Saddledome, Montreal's Bell Centre and Boston's TD Garden. It's the kind of environment they never get at home because they've simply not created enough energy for people to get behind.

Johnson said the Sabres needed to get the first goal and keep pushing through a game and the fans would follow. He was right. Nick Baptiste put the team in front and the Sabres responded twice to retake a lead after Tampa Bay tied the score.

"You could feel it in the arena," Johnson said. "First period we score first, there's a little bit of energy and it goes hand in hand. We generate that, the fans get into it ... You could tell the guys fed off it, the fans fed off it and we kept that going. It works together for us to have success at home."

Sabres Notebook: Johnson, finally, gets a win at home

"It was really great and it starts with that 5-on-3 penalty kill," Housley said. "The guys did a terrific job and the fans appreciated the guys blocking shots, doing the right things and playing a solid 60 minutes."

Ryan O'Reilly, who has posted back-to-back three-point games, was in complete beast mode on the scoresheet and in the faceoff circle. He had three points, six shots on goal and went 25-17 on draws.

"We showed good maturity and good composure when we got a bad bounce or get hemmed in for a bit," O'Reilly said. "We didn't panic. ... it was nice to see. It was a good lesson for us."

This team simply needs to give an honest effort in front of the home folks, like it has done plenty of nights on the road. The response will be there.

"They deserve a lot more," O'Reilly said of the fans. "It's been disappointing for us at home so far and we're trying to turn that around. This was a good tonight to show we're back, everyone is working hard and we want to go with this game here. We want to make this an exciting building to play in." 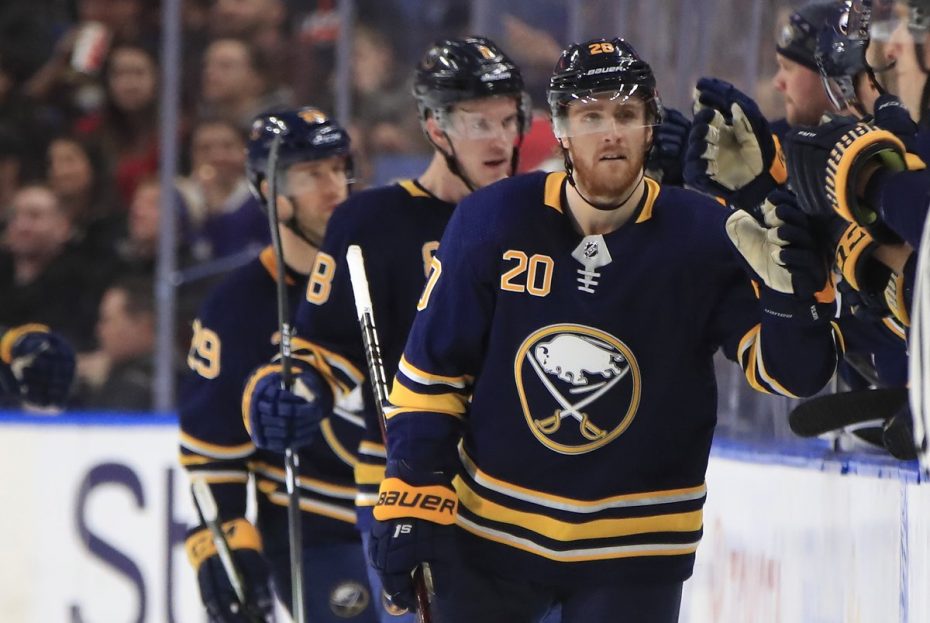 The Sabres bench gives it up to Scott Wilson (20) after his second-period goal against the Lightning. (Harry Scull Jr./Buffalo News)