It's become one of the most-asked questions around the U.S. women's hockey team – how do you parlay beating Canada in the World Championships into winning an Olympic gold medal?

The World Championships are held every year other than Olympic years, and the U.S. has won eight of the past 10, including the last five in a row.

But after winning the inaugural Olympic tournament in 1998, the U.S. has failed to recapture gold on that stage. Canada has won the last four.

Nichols School graduate Emily Pfalzer, who captured three World Championship gold medals with wins over nemesis Canada from 2015 to 17, is a defender on the U.S. team looking for a return to Olympic glory. Pfalzer is one of 13 first-time Olympians on the U.S. roster that opens the tournament in Pyeongchang, South Korea, with a preliminary-round game against Finland on Feb. 11.

The experience has already been vastly different than her other tours with Team USA. U.S. players united on Sept. 4, centralized in Wesley Chapel, Florida, so they could train together daily and work on individual skills and team concepts while playing tournaments and exhibitions in the run-up to the 2018 Games.

"Every non-Olympic year we just meet up for tournaments and different camps," Pfalzer said by phone from Florida. "We weren't centralized. It's awesome to come together. We've worked our whole lives to be in the Olympics and this year, I get to spend every day with my teammates and train and practice. It's been really special to have this time together. 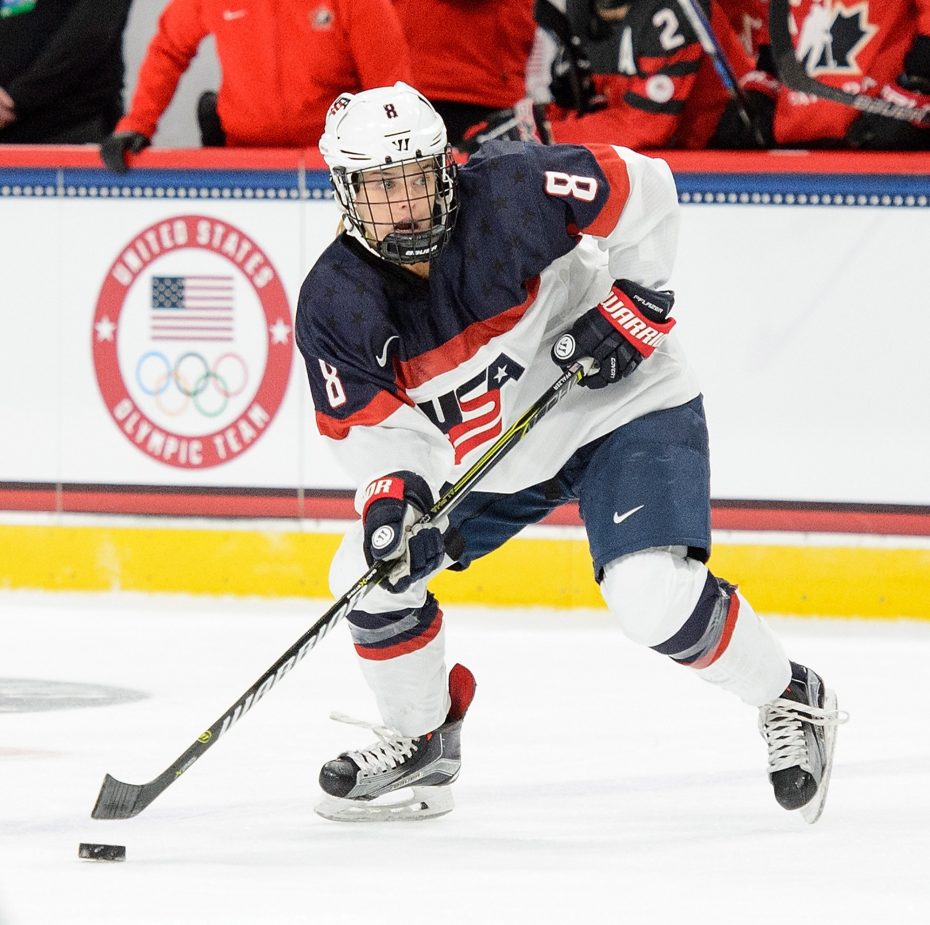 Emily Pfalzer hopes to inspire young players, just as she was. (Getty Images)

"Everyone's an incredible teammate and so hardworking. We all have a team-first mentality. No detail goes unnoticed. We just work hard every day. It's exciting to be around such a fun, great group of people."

Paying attention to the details has been the focus of the national team ever since it lost, again, to Canada in the 2014 gold-medal game in Sochi. Something had to change. For veteran Kacey Bellamy, it was about focusing on daily details over the course of four years instead of putting all the emphasis on the next Olympics.

"I think maybe after Vancouver (in 2010) we looked at 2014 right away," said Bellamy, who is playing in her third Olympics. "And I think the unique thing about this group is after 2014 we really nailed down on our mental skills and we really took it day by day to get better in whatever we needed to do individually or as a team."

The Olympic showdown always seems to be between the U.S. and Canada but the international game is showing improved depth. The Americans know not to take other teams lightly. In 2006, the U.S. lost to Sweden in the semifinals and had to battle back to secure a bronze medal.

Players are well aware of what's going on at the younger levels of the international game as well. When asked about fixing the competitive imbalance in Olympic women's hockey, they all point to tournaments featuring younger age groups, particularly the U18 Championship, which in effect serves as the women's equivalent of the men's World Juniors.

This year marked the first time since the introduction of the tournament in 2008 that it was not a U.S.-Canada final. In fact, Canada was last in its group thanks to an opening loss to Russia. The U.S., meanwhile, needed overtime to get past Sweden in its opening-round game.

The trickle-up effect may take some time, but the competition is coming.

"You definitely see how much the game has grown especially in every country and it’s really cool to see the games get closer and tighter," Pfalzer said. "At the U18 Worlds there were some upsets and some close games and that's awesome to see for our sport."

It's also awesome for Pfalzer to see the game grow in her hometown. Not only are there increasing opportunities for girls to play in Western New York, the player pool is getting deeper. This year's U.S. U18 team featured another Nichols student – Katelyn Knoll, who had two goals for Team USA in its gold-medal run.

"I met Katie in Tampa," Pfalzer said. "They had a pre-tournament game there and she came up and introduced herself to me. It was awesome seeing another Nichols grad and someone from Buffalo playing internationally. It's really just amazing to see all the local players playing college hockey now."

The growth continues in the professional game as well, with Pegula Sports and Entertainment acquiring the Buffalo Beauts to become the first private owners of an NWHL franchise.

Pfalzer, who did not play in the pro league this season so she could prepare with the national team, has been the captain of her hometown team and helped it win the Isobel Cup championship last season. 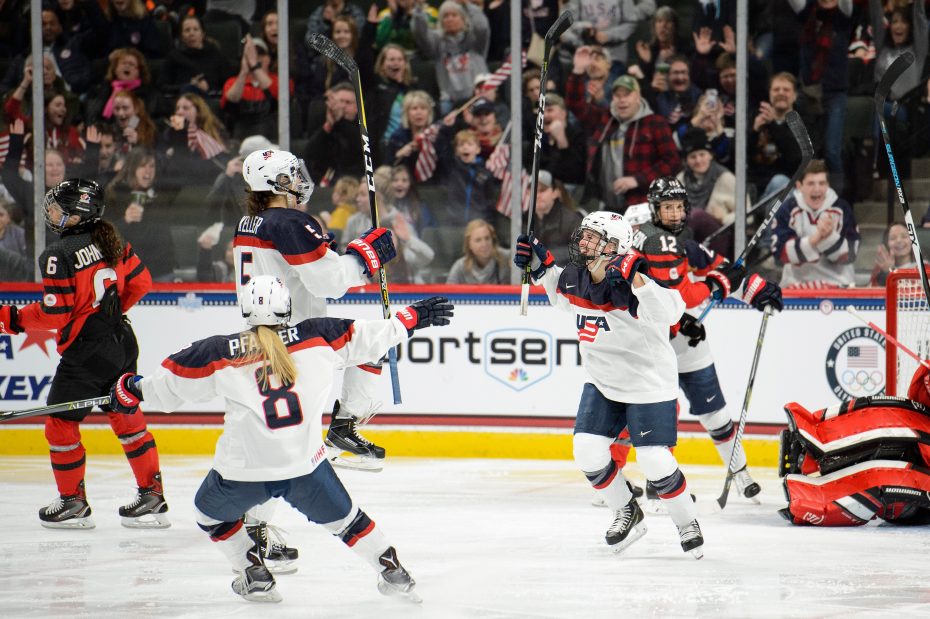 Emily Pfalzer (8), Megan Keller (5) and Dani Cameranesi (24_ of the United States celebrate a goal against Canada during an 2-1 overtime loss in an exhibition game on Dec. 3, 2017 in St Paul, Minnesota. (Getty Images)

The investment by the Pegulas into women's hockey didn't go unnoticed while Pfalzer was in Florida.

"When I heard they bought the Beauts it made my day," Pfalzer said. "It's awesome to see they want to invest in women's hockey and in Buffalo in general."

The investment may pay off even more after the Olympics. Interest in women's hockey often peaks during an Olympic year, and Pfalzer hopes that as fans watch the women's game on the international stage, it translates into more interest for the NWHL.

"I think it will spark interest and spark the growth of women's hockey," Pfalzer said. "Hopefully it trickles down into non-Olympic years and people will see what a great game we have."

Pfalzer herself is an example of how exposure promotes the growth of the sport. She was 4 years old when women's hockey debuted at the Olympic Games, born at the time when opportunities in the girls' and women's game were just beginning to grow in significant ways.

She graduated from Boston College the year the National Women's Hockey League was formed, allowing her to slide right into another competitive, elite hockey environment, enabling her to continue playing and developing.

And now, the hope of the NWHL is that a new generation of young players will be watching Pfalzer and start their own hockey dreams.

"We want to increase the exposure of the game and the Olympics do that," said NWHL commissioner Dani Rylan. "You have to imagine that in 1998, Emily Pfalzer was exposed to women's hockey watching Angela Ruggiero and Chris Bailey playing on the blue line as the U.S. won gold and that it had an impact. Now, there's going to be another girl who watches Emily Pfalzer play in the Olympics and it will empower her to play. If you can't see it, it'd hard to dream it. The Olympics have a significant impact on our game."