The New Lincoln Elementary School building in Lackawanna's 1st Ward stands three stories and spans 51,000 square feet, a hulking edifice constructed in 1925 to serve the growing population of immigrant families who flocked to the city for steel plant jobs and affordable living.

The building ceased being a school in 1988 and since then, much like the vacant and crumbling steel mills that line Route 5, it has stood as a reminder of Lackawanna's long-ago era of growth and prosperity.

But it also stands as a classic paradox. It has outlived its usefulness, but the city cannot afford the cost of demolition.

When bids to raze the building were opened in January, the low bid of $1.2 million submitted by Clark Patterson Lee, a Rochester-based engineering firm, was $500,000 more than the city had to spend.

"The state wants it down. The county wants it down and the neighborhood wants it down," said Mayor Geoffrey Szymanski. "Right now it's out of our financial reach, but I still want it down."

Szymanski said he loses sleep trying to find a way to secure funding to get rid of the building. But the zombie school lives on.

"It's a shame," said Ann Spadone, superintendent of the Lackawanna City School District. "It should have been boarded up. It's almost like everything in Lackawanna. Look at what business and industry have been allowed to leave behind. Now it's left to the taxpayers." 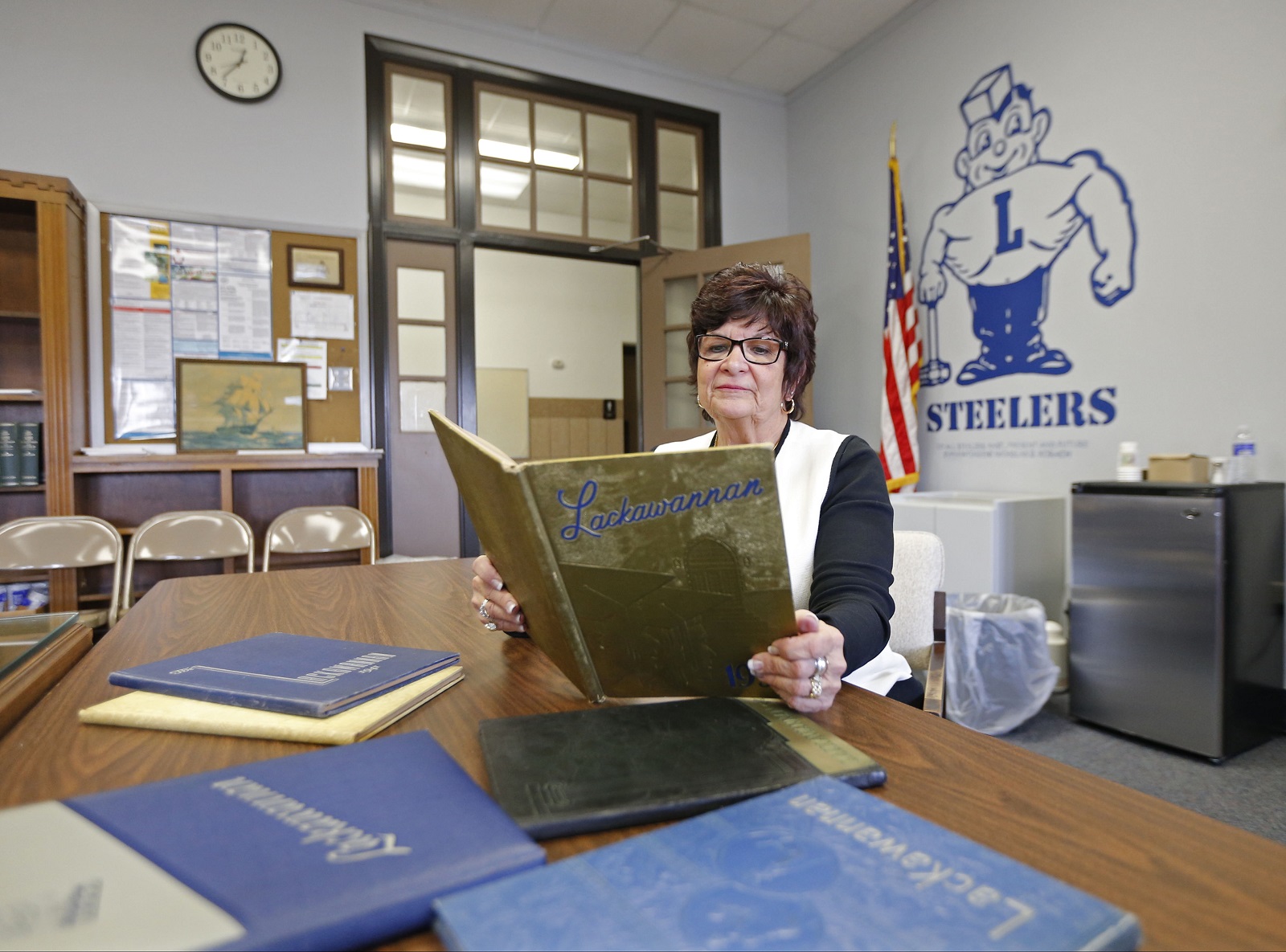 The 1st Ward could be called Lackawanna's "feeder ward." It was an ethnic and racial melting pot, serving as a springboard for residents who sought work at the steel mill and a home to raise their families. First populated by waves of immigrants from Ireland, Italy, Poland, Hungary, the Ukraine, Russia, Lebanon and Yemen, the 1st Ward also has been home to African-Americans, Hispanics and most recently thousands of immigrants from numerous countries in the Middle East.

Nicholas D. Korach, Lackawanna school superintendent from 2010 to 2013, said the 1st Ward was at one time the city's most populous ward.

"A lot of the roots of the original Lackawanna families date to the 1st Ward, and Lincoln School was part of that," he said. "The school is like Lackawanna, sort of. It's kind of an icon sitting there for more than 90 years. It's the ultimate multipurpose school."

Lincoln opened as a high school annex that served grades nine, 10 and 11, because the city's high school was not large enough to handle all the high-school-age students. Spadone said that changed in the 1950s, when elementary grades were changed to kindergarten through sixth grade and the annex was converted to a junior high school.

Jack Pirowski, 54, attended Lincoln Junior High School from 1975 to 1977. Pirowski, who lived on Ingham Street as a youth, today lives on Center Street.

"I was only a little short fat kid but a dozen girls chased me down and beat me with their clogs," Pirowski recalled. "By the time I was in the eighth grade I was playing football and I made friends who protected me. It was scary, but that's the way it was. I learned to respect my neighborhood, and to this day I have great friends from those days." 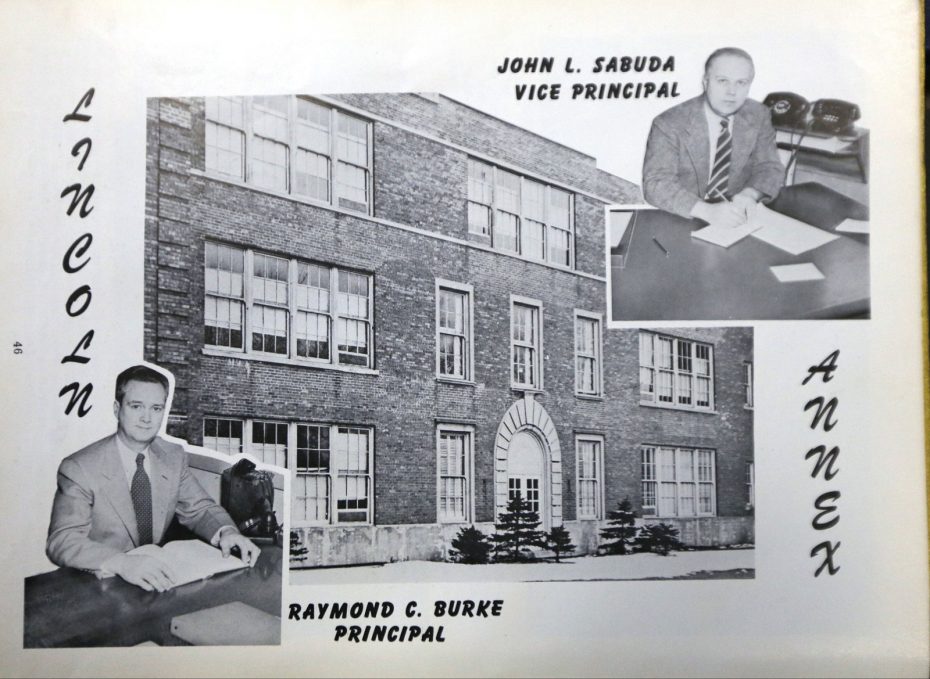 A page from the 1952 Lincoln Annex Yearbook. (Robert Kirkham/Buffalo News)

John Ingram, who recently ran for City Council in the 1st Ward, also attended Lincoln Junior High. Ingram lived on Gates Avenue, and he described the mix of students as "a little bit of everybody."

Lincoln Junior High closed in 1977 and reopened in 1980 as New Lincoln Elementary School, said Korach. During six decades as a school, the building was expanded twice, in 1929 and 1956.

"(The Friendship House) had so many programs – foster care, child welfare, a public service television station, day care, teen drop-in center" said Turner, who now works in the city Department of Planning and Development. "We were getting ready to open a school on the third floor in the old Lincoln school."

But in 1998, the Friendship House ceased operations after a federal court jury found it liable for more than $350,000 in damages in a sex-harassment case involving an employee.

Again, community leaders were left with an empty building.

In 2000, a group of residents envisioned opening a charter school, Global Concepts Academy, at the site. In 2001, a Lackawanna Municipal Housing official recommended the former school as the site of senior apartments with support services. Neither idea caught hold.

In 2007, Erie County foreclosed on the building and transferred ownership back to the City of Lackawanna, said Krakowski.

Lackawanna Police Officer and School Board trustee Anthony Catuzza resides in Bethlehem Park in the 1st Ward. Catuzza has witnessed the disintegration of the former school.

"It was a nightmare for police trying to keep all the scrappers out of there," said Catuzza, who attended Baker Victory School. "It's almost a death trap inside. There are no windows. Graffiti everywhere. The scrappers are even taking the steel window frames.The neighborhood wants it down."

Drew Shapiro was hired to head the city Department of Development less than a year ago. Shapiro said he inherited a headache with Lincoln.

"It's been left to deteriorate for a number of years," said Shapiro said. "Walls are crumbling. You cannot go in there without safety gear. The interior is just falling apart."

The cost of demolishing the school includes: tearing down the building (including the excavation and removal of two underground fuel tanks), asbestos removal and soil remediation.

Finding another $500,000 for the demolition has so far stymied Szymanski.

"What we are hoping for is to get better pricing, so the engineering firm is revisiting the site to see if it can do it cheaper," said the mayor. "If they can't, we'll put it out to bid again."

But even demolition won't be enough to end the life of this gritty school, said Catuzza, who suggested a way to ensure the school's continued presence in the community.

"We want some of the school's steel beams," said Catuzza, wearing his School Board hat. "If we get two eight-footers, we could make (them into) benches to put in front of the high school."