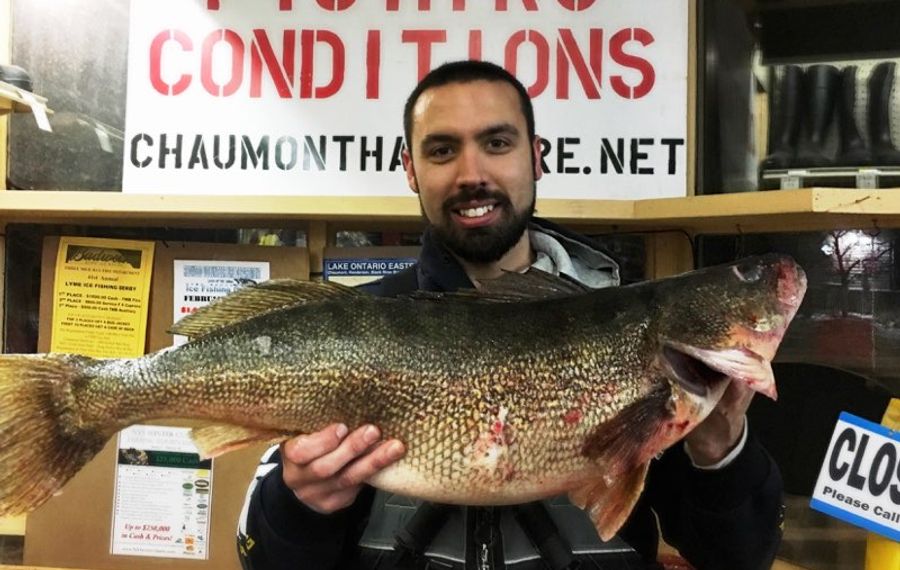 It’s been a roller-coaster ride with the weather to coincide with the fishing – or is it the other way around? When it warms up they catch a few trout in the streams. There’s enough ice now to get out on the hard water whether it’s warm or cold. The Niagara River always has potential, as evidenced by the 32 hardy souls fishing the Niagara River Anglers steelhead contest last weekend. Keep reading.

The walleye ice bite is still on according to Mike Sperry at Chautauqua Reel Outdoors. Put yourself over 30 to 40-feet of water, using No. 7 and No. 9 ice jigging Rapalas in various colors.  There have been lots of perch, however, good keeper-sized are hard to find. A small jig head tipped with a wax worm or emerald shiner is working. Some nice Crappie have been reported also. Most fishing is taking place on the upper basin. A couple newcomers to the sport stopped in to visit Hawk at Capt. Bob’s Outdoors in Clarence and he gave them some quick instructions for fishing Chautauqua. One of the first fish caught by Matthew Breidenstein of East Aurora, fishing with Tom Baritot of Lancaster, was a 50-plus inch musky! They were fishing off Long Point using minnows from Capt. Bob’s. They moved around quite a bit and found ice thickness was no less than 10 inches and up to 12 inches in most spots. They managed two keeper walleyes, both coming on Swedish pimples. They also tried for perch and found consistent action on the bottom with various baits, from pimples to jigs tipped with eyes, spikes or minnows, whole and cut. They caught lots of perch and a few silver bass but nothing noteworthy.

With some warmer afternoons coming this weekend and next week, expect slush in the morning in the streams which will melt off by the afternoon according to guide Alberto Rey of Fredonia. Unfortunately, there is a lot of shelf ice so you want to be very careful when walking out to fish the open water. Chautauqua and Canadaway creeks have been slow but some of the smaller streams have been producing with nymphs and eggs. Those smaller streams have been getting a fresh run of steelies, too. Rey has had good luck on white streamers but if they don’t take it within the first few swings, the fish shut down. Purple and black streamers seem to be good most of the time. Visibility has been good on all streams except for Cattaraugus and Canadaway, which has not cleaned up for months for some reason. There is some ice fishing taking place in the main lake but caution is advised. Watch the winds. Barry Ball of Alden checked in with a new leading yellow perch in the Capt. Bob’s Outdoors fishing contest. He was fishing Lake Erie, 4 to 5 miles off Hamburg in 40 to 50 feet of water. Ice thickness was 10 to 12 inches. He caught some jumbo perch and a few nice walleyes with his son Steve. One of the perch stretched 15.5-inches and tipped the scales at 2.14 pounds. Barry was the winner last year with a 12-1/2-inch perch. Steve’s biggest walleye was 28-3/4-inches and is currently in third place in the Capt. Bob’s event.

Fishing in the lower Niagara River has been difficult to say the least. Ice floes, wind and frigid temperatures all had an impact on the NRAA contest last weekend. Dan Spangler of Ohio won with a 10.26-pound steelhead, caught on a MagLip lure and fishing with Capt. Mark McGranahan of Sparky’s Charters. Second place was 9.74 pounds, reeled in by Justin Graham of Washington State using a pink egg sac and fishing with Capt. Chris Cinelli of Grand Island. Third place was Jack Taylor of Batavia with an 8.34-pound steelie. He was fishing a MagLip with Capt. Frank Campbell of Niagara Region Charters. Taylor also reeled in the big brown trout, a 3.74-pound fish – on a MagLip. Check out Scattershots this week for more details. Ice was still a problem on Tuesday (as was the cold temperatures). Peter Goretti of Buffalo caught a nice steelhead this week in the lower river. His 31.5-inch fish took over the lead in the Capt. Bob’s Outdoors Fishing Contest. The contest continues through March 15.

Greg Schloerb of Amherst had a pretty good weekend fishing the Oak and Burt. He caught five trout at the Oak Saturday including a giant male steelhead with a huge kype. No photo was taken because of a slow reaction from his fishing buddy – and Greg dropped the fish. Water conditions were ideal with a slight stain. Water level was also good. Lots of slush in the morning but it cleared up once the sun came out. All fish were caught on one of his olive jigs tipped with a wax worm. On Sunday Burt was hot. Water level was low but it offered good color. He reeled in six steelhead including a 12-pound male. The one from Oak was bigger. Again, all were caught on his olive jig tipped with a wax worm.

One of the hot spots for perch continues to be Sodus Bay. According to media maven Chris Kenyon, ice is 10 to 12 inches thick and some of the bigger perch are coming from deeper holes in the 30 to 40-foot range. The perch have been hitting larger presentations like Swedish Pimples and Kastmaster spoons. He also emphasizes the importance of not trespassing and not littering – either around your car or on the ice. Make sure you pay respect to landowners and the lake itself. Chaumont Bay has been producing some monster walleye this winter. The current leader in the NYS Winter Classic is a 15.9-pound hawg that hit a shiner through the ice and reeled in by Josh Allein of Redwood. Dave Fisher of Cheektowaga took advantage of the bite there in eastern Lake Ontario and came back with a new leader for the Capt. Bob’s competition – a 31-inch, 12.17-pound ‘eye.