A fresh façade has come to the space that was formerly J&L Automotive on Hertel Avenue near the Delaware intersection.

Opening in late January, The Garage Café & Lounge is the first step in an ambitious plan to convert the former auto-shop to a dining, drinking and entertainment destination. There's plans for a bar, live music lineup and open-air beer garden on the back patio. But for now the Garage Café is on the first leg of its journey.

Removed from the hustle and bustle of Hertel Avenue's busier blocks, this new venture is hoping to revitalize itself and the surrounding area in time for the city to thaw and the summer foot traffic to regain a foothold.

The menu consists of a broad, fittingly automotive-themed sandwich selection as well as a few other choice breakfast items including mammoth frosting-spackled cinnamon buns and hot coffee beverages. The plan is to eventually institute one rotating nightly homestyle main course option for dinner hours. 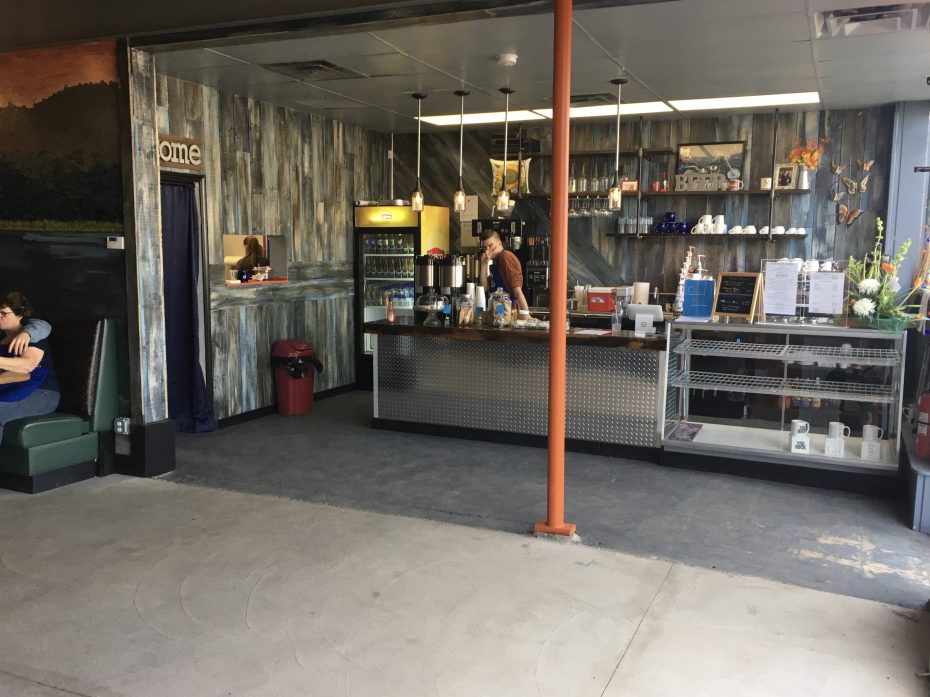 Order counter inside the Garage Café. (Phil Wagner/Special to The News)

The renovation left industrial enough to maintain its old garage beginnings (without the grime, of course). Steel, concrete and rustic wood tables are brightly sunlit through the massive glass garage door. It's cozy and inviting, as any café should be.

Along with a strong black coffee I ordered a pair of sandwiches and a cup of soup to warm up with. Orders are placed at the counter then brought to the table of your choosing when ready.

Nonnie’s Soup ($4.25 a cup) is a simple pairing of chicken broth, roughly diced potatoes and a pleasantly surprising poached egg that I unearthed toward the bottom. The ultimate “sick” soup, the name couldn’t be more fitting, placing it alongside chicken noodle and matzo ball. The broth tasted fresh, not overly salty, and the skinless potatoes soaked up flavors. 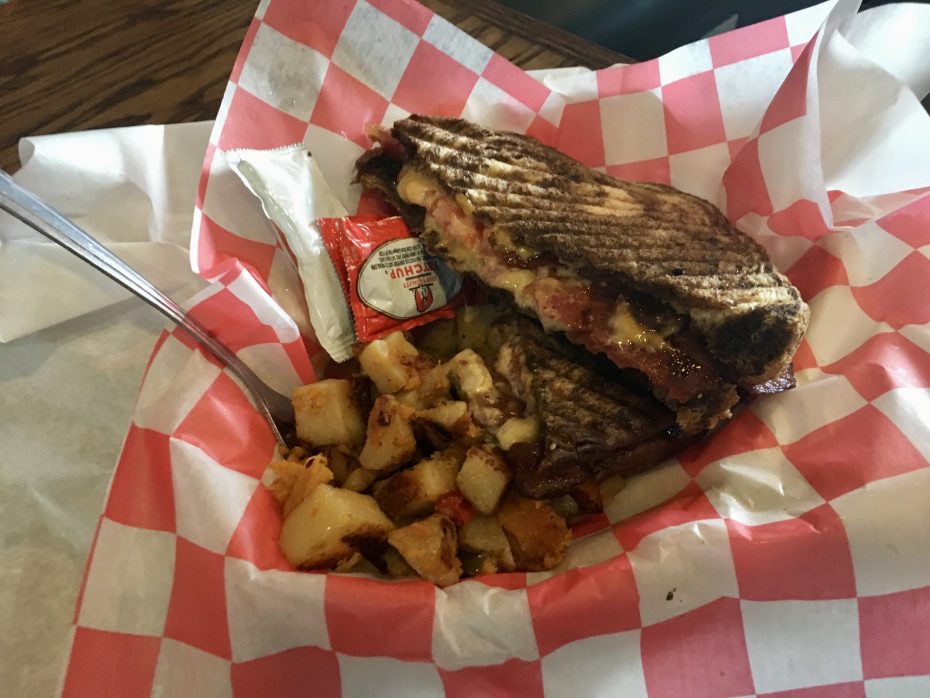 The Chevy, bacon and tomato grilled cheese panini on marbled rye. (Phil Wagner/Special to The News)

For $8.50 at the Garage Cafe, you can order one of the better grilled cheese sandwiches I’ve had. The Chevy panini, above, is layered with cheddar cheese, thick-cut bacon, sliced tomato and drizzled with Italian mayonnaise on your choice of bread, in this case marbled rye.

A common mistake in the panini game is to under-press the sandwich. This one was seared hard to a thumping crisp while the inside became gooey. The bacon was crisp but thick, adding a pleasant chew to the molten mass finished with mayonnaise tang. Best item of the day.

I swapped the chips for a side of home fries, but wound up disappointed. The Garage Café version includes sweet potatoes, which isn’t specified on the menu. It’s one of the few foods I don’t particularly care for and I found it made the mix a little mushy. 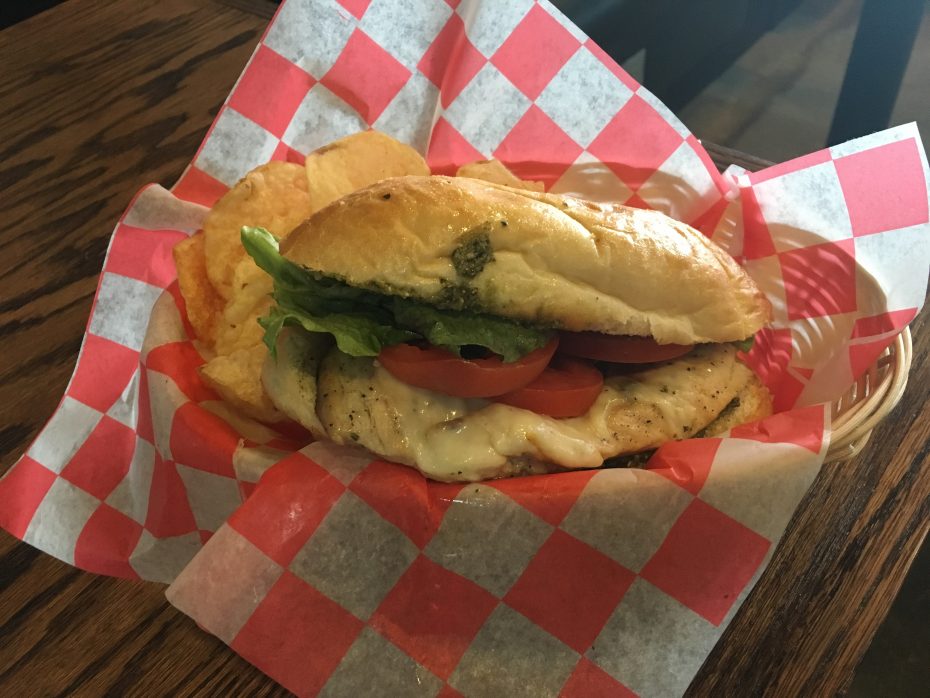 The Wagoneer is a chicken breast sandwich with provolone and pesto mayo on a rustic hoagie roll. (Phil Wagner/Special to The News)

The Wagoneer ($9.95) falls into the “specialty sandwich” category, which denotes more premium meats on a rustic hoagie roll. In this case, a house-brined grilled chicken breast topped with provolone, lettuce, tomato and pesto mayo, served with a side of chips.

The brine kept it moist, but the accompanying lettuce and tomato didn't add much. The hoagie roll was fresh, and coated well with flavorful pesto. It was a solid offering, but needed better veggies to rival the Chevy. 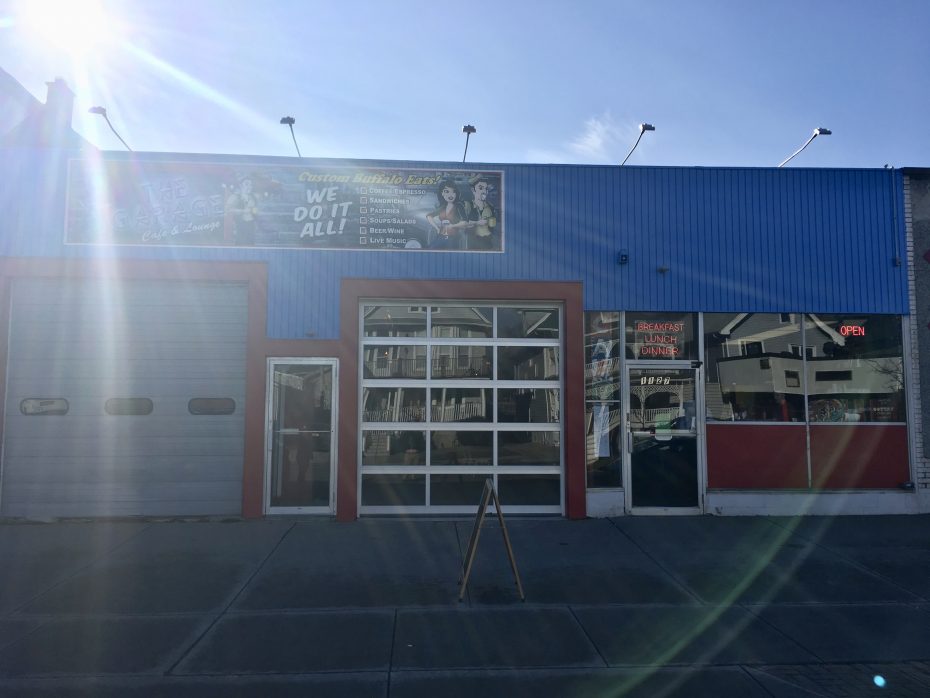 The exterior of the Garage Café on Hertel Avenue near Delaware. The newly renovated restaurant was the former home of J&L Automotive. (Phil Wagner/Special to The News)

The Garage Café & Lounge will bid to become a destination for food and nightlife alike when spring arrives. In the meantime, its engine is running smooth, cranking out breakfasts, soups and sandwiches that I’ll be making another lap for soon.