It looks great and can carry a lot of cachet. But owning or selling a historic Delaware mansion can be a challenge.

They may have aging infrastructure and can't be changed too much without destroying the very fabric that makes them unique.

Three recent deals show the appeal of the grand properties, as well as the challenges that buyers and sellers face.

"When you take what was a home and try to make it office space, it's not always that easy," said Yurtchuk, who hired a third-party engineering firm, EFS, to manage the Clement Mansion for the nonprofits. "These are larger structures that do require more absolute dollars to maintain and keep them up and keep them functioning properly."

For example, roofs, chimneys and masonry may need to be repaired and maintained. HVAC and other mechanical systems may need to be upgraded. And significant dollars need to be set aside to handle the unexpected.

That can be unnerving at first, as BPO officials experienced after they brought in their own engineers, until Yurtchuk brought in EFS as reassurance. Now, he said, BPO will be setting aside about $40,000 to $50,000 per year for maintenance and capital expenditures.

On the other hand, he noted, these mansions were built to last. The Clement House was constructed with chunks of solid limestone, for example, and its 1931 elevator – with its solid copper cab – still works.

"They've been standing for one hundred years for a reason. They've been built well," said architect Steven Carmina, of Carmina Wood Morris PC, which has worked on historic renovations like the Conners Mansion and the conversion of the Knights of Columbus hall into The Knights at 506 Delaware. "Certainly there are challenges to them. But as long as they stay ahead of it, they'll be fine." 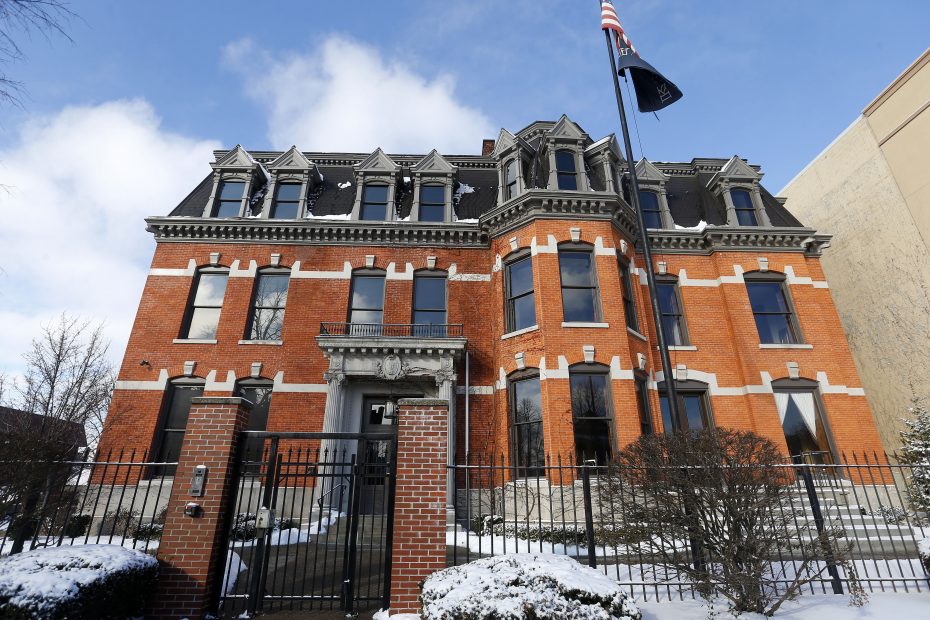 Many of these houses were already upgraded long ago and adapted for commercial use, with multi-zoned HVAC systems, new windows and other modern features already in place. Once that's done, "they're very easy to maintain," Yurtchuk said.

"If you get on a regular capital replacement program, you're not going to be surprised," Yurtchuk said. "It's not as bad as you think to keep it going."

That was a big help for Canisius, for example.

Robert J. Schoellkopf, vice president of finance at the private Jesuit high school, said the school was fortunate to inherit work that Hospice Inc. did on the former Gilda's Club property.

"Most of the infrastructure had been updated and significant building code issues were taken care of," Schoellkopf said.

That previous restoration work, designed by architects from Carmina Wood Morris, involved renovations on the second floor, but largely preservation on the first floor, where original spaces were still intact. Crews rebuilt the porte cochere and masonry, replaced windows and rehabbed other feature, "which should give that building another 50 years easily," Carmina said.

The large rooms of old mansions can also be more adaptable to modern workspaces and some classrooms, which tend to emphasize open areas and low partitions instead of walled offices.

That's what Canisius did to create "open-concept learning spaces," Schoellkopf said. The basement of the Conners mansion now has classrooms and rehearsal space for chorus and handbell ensembles, while the third floor has practice rooms and rehearsal space for the concert band, orchestra, other ensembles and small groups. The second floor has art rooms for drawing, painting, sculpture and ceramics, and the first floor is for special events.

"We are well-acclimated to caring for historic, residential spaces that have been repurposed," Schoellkopf said. "When renovating such a space, you need to be comfortable with making investments that will ease the maintenance burden moving forward."

In CTG's case, the information technology company had originally sought to sell the Knox Mansion along with a brick administrative building for $6.5 million. At the time, officials were seeking to capitalize on the burgeoning real estate market in Buffalo while consolidating the company's workforce into a single building somewhere else to lower expenses after reporting two quarterly losses amid falling revenues.

It took the mansion off the market last year, and instead marketed the 1957 administrative building for $3.2 million in November 2006.

Ellicott Development, owned by Carl and William Paladino, paid $1.8 million on Friday to acquire the administrative facility and a parking lot at 685 Delaware Ave. through 4628 Group Inc. William Paladino, Ellicott's CEO, said Tuesday morning that his plans for the former CTG office building aren't yet clear.

Built in 1957, the red-brick building has three floors, and is located a block away from CTG's primary headquarters in the former Knox Mansion at 800 Delaware. The property includes 32 parking spaces behind the building, plus another 47 spaces across the street at 685 Delaware.

The building is located on 0.71 acres between Summer and North streets, just north of the Theodore Roosevelt Inaugural Site.

Built in 1918, the Knox Mansion was built for Grace Millard Knox, widow of Seymour H. Knox, who founded and owned the S.H. Knox Co. five-and-dime stores and later served as vice president of Woolworth Co. and chairman of the board of Marine Trust Co., later HSBC Bank USA.

Designed by prominent architect Charles Pierrepont H. Gilbert and constructed at a cost of $600,000, the French Renaissance-style house originally had 25 rooms, and is about 48,000 square feet. It was owned by the family until 1969, when it was acquired by the Montefiore Club, a private men's club. CTG bought it in 1978, and has occupied it since.

"Now that we have sold our building at 700 Delaware Ave., our Buffalo-based corporate employees are working in one building, our headquarters, at 800 Delaware Ave.," CTG Senior Vice President and Chief Financial Officer John M. Laubacker said Sunday by email. " We currently have no plans to relocate to another location."