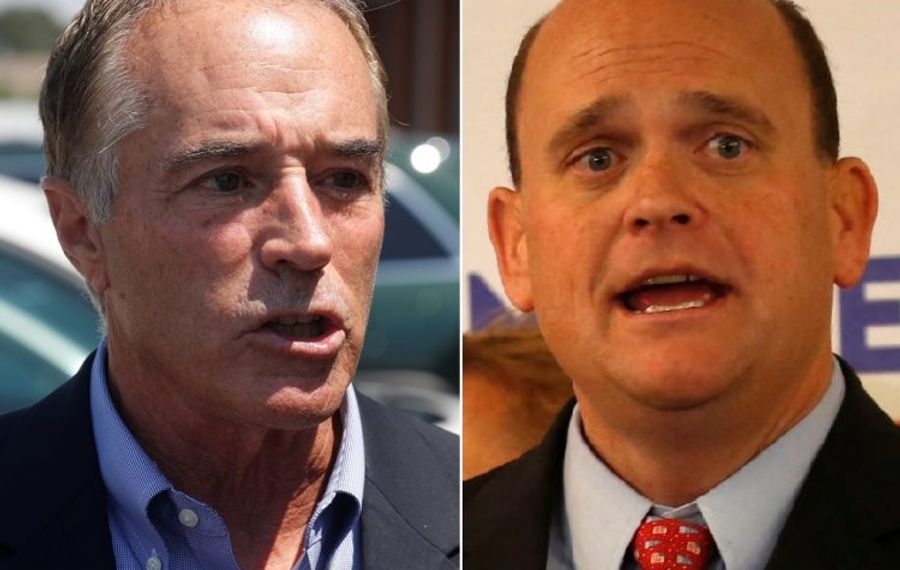 Rep. Chris Collins of Clarence had $1.19 million in his campaign war chest as of Dec. 31, according to campaign finance reports filed last week. Of the five Democrats aiming to dethrone Collins in New York's 27th congressional district, East Aurora attorney Sean Bunny had the most money at the end of the year: $92,421.

Meanwhile in New York's 23rd district, Rep. Tom Reed of Corning amassed $1.03 million. Of the Democrats aiming to defeat Reed, Ithaca cardiologist Linda Andrei – who only entered the race in December – raised the most. She had $131,231 on hand as of Dec. 31.

Those figures show that despite an outpouring of energy among Democrats opposed to President Trump and a plethora of candidates in many districts across the country, Republicans such as Collins and Reed maintain one huge advantage over their prospective opponents: money.

Collins raised $748,067 last year, significantly more than he has in earlier years, and he did it for an obvious reason.

"Chris was Donald Trump's number one supporter in Congress, and with that comes a lot of unhinged Democrat advocates who decided to make him a target," said Christopher M. Grant, Collins' political adviser. "So with that, you solidify your financial base early and run a real campaign. That's how you protect yourself long-term."

Collins, the first House member to endorse Trump for president, became one of the Democratic Congressional Campaign Committee's first targets for 2018.

Five Democratic challengers to Collins ramp up their efforts

For his part, Bunny didn't sound intimidated by the huge fundraising gap between him and the incumbent.

"I'm happy with what we've come up with, with almost 1,000 individual contributions," Bunny said.

Bunny also joked that he had raised almost as much campaign cash as Collins spent on legal fees while facing an ethics investigation tied to his investments in an Australian biotech firm. But in reality, Collins spent much more on lawyers than Bunny raised, including $162,823.27 in the third quarter of 2017 alone.

Nicholas Stankevich, the Mumford businessman who is also running for the Democratic nomination, finished second in money among the potential Collins challengers, with $68,261 on hand as of the end of the year.

Nathan McMurray, the Grand Island town supervisor who recently announced he would run for the Democratic nomination to challenge Collins, had not raised any money for his race before the Dec. 31 filing deadline. Nor had Joan Elizabeth Seamans, a businesswoman from Williamsville who also recently announced that she is running.

But, like Bunny, McMurray insisted he will be able to raise the funds to run a credible race against Collins.

"We can't match him dollar for dollar, but we're going to be able to give him a good run," McMurray said.

In the Southern Tier's 23rd district, Reed – a four-term lawmaker from Corning  – holds almost as big a financial advantage over his possible Democratic opponents as Collins does.

"While our opponents fight to take the most extreme liberal position on the issues, we are taking nothing for granted and have made early investments in our campaign infrastructure to earn the support of every voter," said Nicholas Weinstein, Reed's campaign manager.

One of the newest candidates in the race to replace Reed – Andrei – had an impressive start to her campaign, raising more than $130,000 in less than a month.

“In the weeks since entering the race, I have been humbled by the outpouring of support for my campaign," Andrei said. "People are looking for a representative who isn’t beholden to special interests."