Every once in awhile, his mind races back to Oct. 20, 1970, and the unanswered questions that still puzzle and distress him.

Why would anyone walk into a house in Cattaraugus County farm country and brutally stab a 23-year-old nurse who had no known enemies? Did the killer know her?

Why was nothing stolen? What was the motive?

Who was the thin, narrow-faced man that a witness spotted near the isolated Town of Allegany home around the time the young victim was murdered?

"This was one of those cases that haunts you for the rest of your life," said Stofer, now 82, who was at the crime scene that day and spent more than 30 years looking for the killer. "When you look at the ferocity of the attack – a woman stabbed again and again – you think there had to be a personal reason behind it…There was no evidence of a sexual attack. We never found out who did it, and never found out why."

"That crime really put a scare into the people of this community," recalled Michael L. Nenno, a retired county judge who knew Fitzmaurice's parents. "A nice young woman, brutally murdered in her own home in the middle of the day…and someone got away with it."

But State Police investigators have not given up on solving the crime.

Last week, they issued a "Cold Case" news release, urging anyone with information about the case to call Investigator John Zeigler at (716) 372-2550.

No new information about the crime has surfaced, but police want people to know that they are still looking into it and are still interested in any information – no matter how significant it may seem, Senior Investigator Gulio Giardini told The Buffalo News.

"The victim still has a sibling in this area, and we'd like to solve it for his sake," Giardini said. "We realize that the suspect would probably now be in his or her late 60s or 70s at this time. Maybe the person who did this might feel it is time to come forward and confess. It would be fantastic to bring justice to this case."

Fitzmaurice's brother, who lives in Olean, declined to comment, telling a reporter he never talks about the murder. 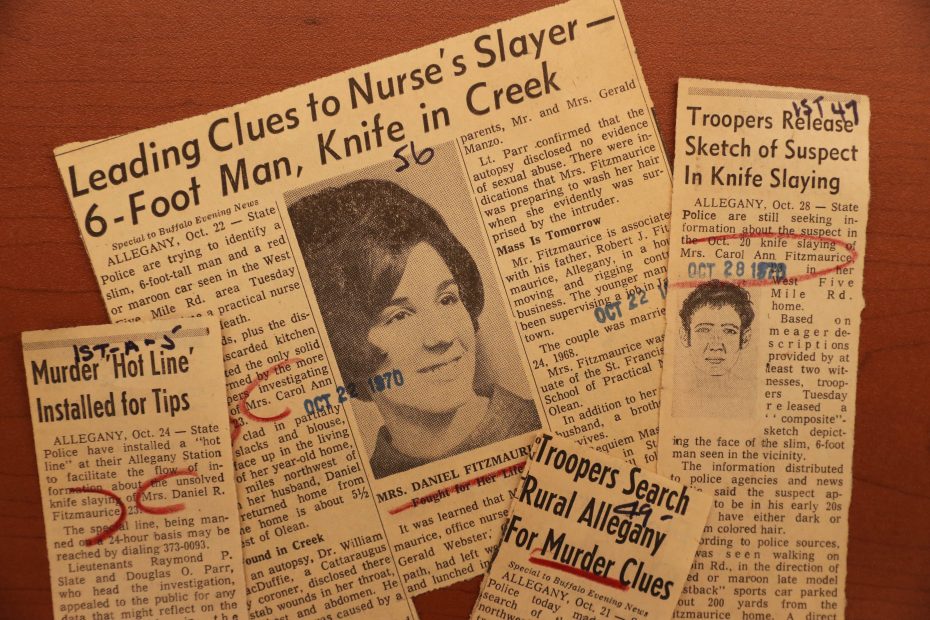 Newspaper clippings about the slaying of Carol Fitzmaurice, and the fruitless hunt for her killer. (Sharon Cantillon/Buffalo News)

Fitzmaurice was a woman of "startling beauty" from a good family, recalled Stofer, the retired trooper. Her husband, Daniel Fitzmaurice, was three years older than she. He worked for a contracting business run by his family. Her father, Gerald A. Manzo, was a decorated World War II hero, who served as an Army medic on battlefields all over Europe. He worked at the Dresser Rand plant in Olean and was a state champion skeet shooter. Her mother, Catherine Manzo, was a secretary to the Cattaraugus County health commissioner. Gerald Manzo died in 2011 and his wife died in 2014, never knowing why their daughter was viciously murdered.

Fitzmaurice worked as an office nurse for Dr. F. Gerald Webster, an Olean osteopath. On her final day, she worked until about noon, then had lunch in Olean and spent time with her parents, police said after the murder.

Her husband found Carol Ann's body, lying face-up on the living room floor, when he returned home around 6 p.m. Police said she had been stabbed 14 times, in her throat abdomen and upper body.

An uncooked chicken was found in the oven, police said, indicating that Fitzmaurice was getting dinner ready shortly before she was attacked. Troopers found the murder weapon, a long-bladed knife, in a shallow creek about 300 yards behind the Fitzmaurice home on West Five Mile Road, a few miles north of Olean and about 70 miles south of Buffalo. 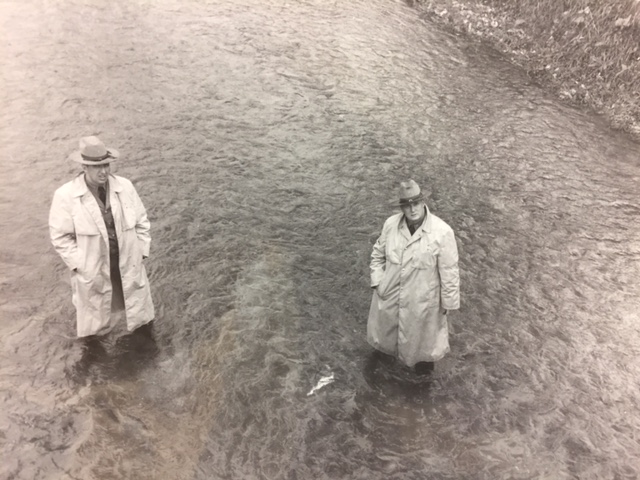 New York State Troopers search a creek behind homicide victim Carol Fitzmaurice's home in the Town of Allegany in Cattaraugus County in 1970. Fitzmaurice was stabbed 14 times. Police have made no arrest in the case. (Provided by New York State Police)

There were no indications of problems between Carol Ann and her husband, but Stofer said police investigated Daniel Fitzmaurice's whereabouts at the time of the murder. They determined he was working in Jamestown at the time she was killed, more than an hour away. Giardini agreed that Daniel Fitzmaurice – who died in a motorcycle accident about a year after the slaying – was cleared as a suspect. 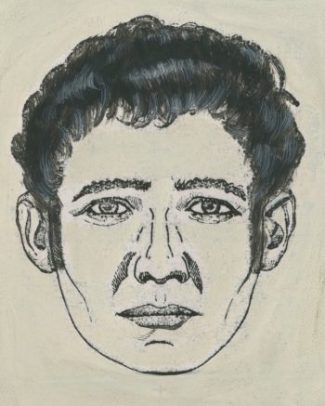 A sketch of an unknown suspect in the 1970 murder of Carol Fitzmaurice. (File photo/The Buffalo News)

Daniel Fitzmaurice is buried next to his wife in St. Bonaventure Cemetery.

The Fitzmaurice home was about a quarter-mile from the nearest neighbor, but a woman who was in the area that time saw a man – described as a thin individual, about six feet tall with narrow facial features – near the home around the time of the murder. Police said the man's red or maroon car was seen about 200 yards from the home, parked on the road and facing the wrong way.

Investigators working under the late State Police Capt. Henry "Hank" Williams canvassed the area for weeks but never learned the identity of the narrow-faced man.

Police said fingerprint evidence and a hair was found in the home, but those items could never be linked to any suspect.

"Over the years, we had all kinds of theories and names that came up," said Stofer, who retired from police work in 2012 after working on a Cattaraugus County "Cold Case" unit for several years.

In terms of frustration, Stofer ranks the Fitzmaurice case right up there with the infamous "Ski Wing murder" case of Feb. 6, 1978. In that case, burglars stole a safe stuffed with $18,000 cash while murdering two young men who worked as midnight shift ski hill groomers at the old Ski Wing resort, not far from the Fitzmaurice home. That case also remains unsolved.

"I feel bad about this case because I knew some of Carol Ann's family," Stofer said. "I would see her mother from time to time, and it was very heartbreaking. She looked like she had the life yanked out of her." 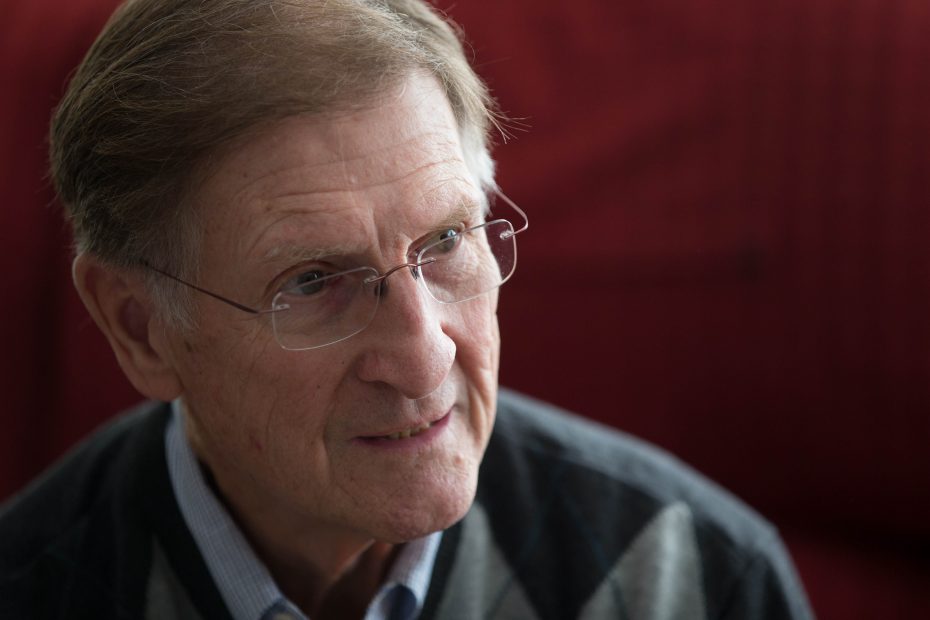 J. Thomas Stofer, now retired, was a State Police Senior Investigator who worked on the 1970 slaying of Carol Fitzmaurice of the Town of Allegany in Cattaraugus County. (File photo/Derek Gee/Buffalo News)