If you were wishing for an early spring, your hopes rode this morning on a Pennsylvania rodent.

Forecasts from the Climate Prediction Center of the National Weather Service already declared it'll stay decidedly wintry through much of February.

Punxsutawney Phil confirmed that just after 7 a.m. today when he emerged from hibernation and saw his shadow.

The northern tier from the plains to Maine is expected to be under colder than normal conditions in February. (Climate Prediction Center)

Thursday night's Arctic front swept away Buffalo Niagara's near 40 degree temperatures and ushered in readings in the teens with a chilly northwest wind. 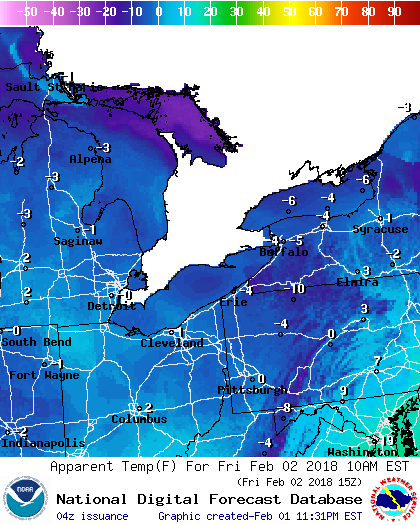 Those low temperatures are forecast to remain in place today with some scattered snow in the Buffalo Niagara region.

"Brief reductions in visibility down to a half-mile or less are likely within these bands," the weather service said. "Be prepared for rapid changes in visibility and snow-covered roads."

Daytime highs are forecast to be in the middle teens, but a gusty west wind will keep it feeling below zero all day, the weather service said.

Snow showers are possible overnight too with overnight lows near 10 degrees. Sub-zero wind chills are expected to persist into Saturday morning.

Meanwhile, some lake-effect snow is also expected to impact the region through early Saturday.

Up to 3 inches is possible in eastern Niagara County and Orleans County off of Lake Ontario.

South of Buffalo, 3 to 4 inches is expected in the traditional snowbelt areas of southern Erie County with a half-foot or more possible in Chautauqua County, the weather service said.

The Buffalo metro area can expect an inch or 2, forecasters said.

How iced over is Lake Erie today? About 60 percent

Temperatures are forecast to moderate somewhat for the weekend with highs in the upper 20s Saturday and a continued shot at some snow showers.

The breezy conditions are forecast to persist, keeping wind chills as low as -10 degrees, the weather service said.

Chances for snow increase late Saturday into Sunday as a storm system tracks from Missouri to the Mid-Atlantic region, forecasters said.

"There is good model agreement with this system, increasing confidence in a general widespread light snowfall on Sunday with accumulation in the 2 to 4 inch ballpark," the weather service said.

Sunday's high could make it into the low 30s.