Buffalo Police Officer Justin Tedesco mistakenly believed his partner had been shot in the ear when he opened fire on Jose Hernandez-Rossy as he was running away last May.

Although his partner was bleeding profusely from the side of his head and had screamed that he had been shot, Tedesco was wrong.

That was the conclusion by the state Attorney General's Office after a lengthy investigation into the police shooting death of the unarmed Buffalo man.

According to both state law and the U.S. Supreme Court precedent, law enforcement officers have the legal right to use deadly force if the officer "reasonably believes that such fleeing individual has just committed a felony involving physical force against another person," a statement from the AG's office said.

How a 'calamitous confluence of events' led to a police shooting

"According to the involved officers’ testimony and the accounts of multiple civilian witnesses, the officers in this case had a reasonable, if mistaken, belief that Mr. Hernandez-Rossy had shot Officer Joseph Acquino in his vehicle prior to fleeing from the scene," the AG's office said.

As a result, there's no evidence to file criminal charges against Tedesco, the state Attorney General's office announced as it released its findings of a nine-month investigation led by Alvin Bragg, chief deputy attorney general and Chief of the Special Investigations and Prosecutions Unit into the May 7, fatal shooting.

AG investigators also confirmed earlier reports that when a fellow officer found Acquino, he was holding a bag of drugs including fentanyl-laced heroin and cocaine which authorities believe he grabbed from Hernandez-Rossy's pocket during the fight in the car.

[Read more details about how the shooting unfolded.]

“The death of Mr. Hernandez-Rossy was a tragedy and my heart goes out to his family, friends, and everyone who cared about him,” said Attorney General Eric T. Schneiderman in a statement. "This determination does not lessen the tragedy of Mr. Hernandez’s death, nor does it excuse the use of excessive force by police in other cases."

Schneiderman said he hopes the details laid out in the report provide Buffalo Police "with the facts, evidence, and recommendations necessary to help prevent these types of tragic events from happening again.”

Katherine Garcia, a cousin of Hernandez-Rossy, said the family was deeply disappointed by the AG’s ruling.

“It is not what we were hoping for,” she said. “It’s fresh and we’re still trying to take this in. ... There is shock and there is some anger.”

The report recommended the Buffalo Police Department consider equipping officers with Tasers, which the department doesn't widely do at the moment, and criticized the department for failing to perform a "prompt and complete accident reconstruction" following the incident.

The AG's office strongly recommended the department seek accreditation through the state to improve its practices for evidence collection and documentation.

"We feel it was a thorough and complete, independent investigation and we agree with their findings," said Capt. Jeff Rinaldo, a spokesman for the Buffalo Police Department.

He said the department has begun the process of becoming an accredited law enforcement agency and that when Byron Lockwood was named the new police commissioner, he authorized Rinaldo to begin looking into whether the Buffalo police should use Tasers or other similar non-lethal devices. 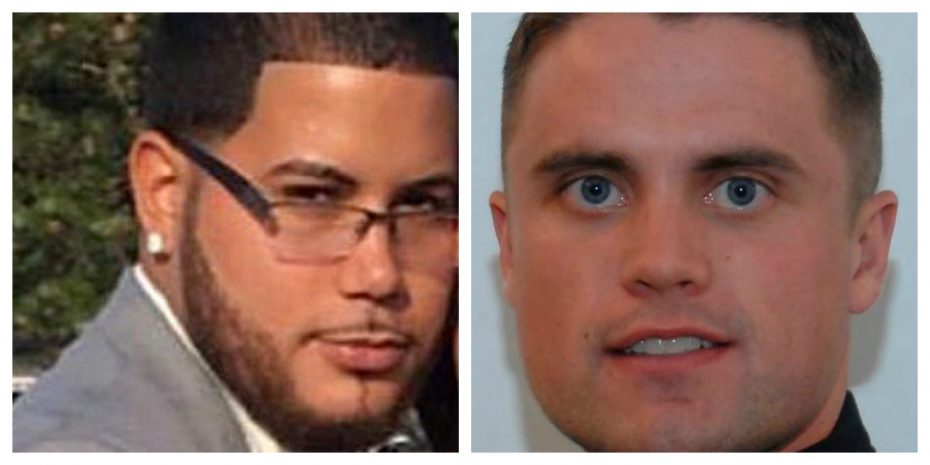 Jose Hernandez-Rossy, left, who was shot dead by Buffalo Police Officer Justin Tedesco while involved in a May 7, 2017 struggle with Officer Joseph Acquino, right.

Tedesco's attorney, Thomas H. Burton, said Tedesco was "relieved that the microscopic review of this matter has turned out as we all anticipated it would."

He said the account of events showed that Tedesco reasonably believed his partner had been shot and that he made efforts to subdue Hernandez-Rossy before shooting him.

"He fought with him, he pointed a gun at him, he hit him with it," Burton said. "The officer didn't have to do that. Those are all things he did prior to shooting him."

“We just miss his energy and we wish he were here to see his daughters growing up. His youngest daughter, Nayelis, just turned one,” Garcia said. He also has two other daughter, Maya, 8, and Sophia, 3.

Nelson S. Torre, who is representing Hernandez-Rossy's mother in a federal civil rights lawsuit stemming from the death, said Tedesco never should have fired his gun.

"Everybody knows cops have a tough job. Everybody also knows you don't shoot an unarmed man in the back. All the eight witnesses interviewed said Jose was empty handed," Torre said.

Torre believes Aquino suffered the right ear injury when Hernandez-Rossy "stepped on the gas." The attorney cited the blood stains that were found on the interior and exterior driver's side door frame and floor mat. But Torre says the investigation does not answer when and how the injury occurred.

Hernandez-Rossy "feared for his life," Torre said, after the officers "ran him off the road." Damage to the police car's passenger side rear view mirror and headlight, he said proves that.

"When I reviewed the Attorney General's report, I got the sense of a 26-year-old kid running for his life," Torre said.

"I don't want to try this case in the press, but there are seriously troubling aspects to this case when measured against the physical evidence and not following proper police procedures," the attorney said.

Torre also expressed concern that the police car was moved by an unknown responding officer and that it should not have been moved because it was evidence.

As the Hernandez-Rossy's family was meeting with representatives of the AG's Buffalo office at Main Place Tower in downtown, a couple blocks away in the lobby of Buffalo Police Headquarters, 11 members of Black Love Resists in the Rust/Just Resisting were trying to arrange a meeting with interim Police Commissioner Byron Lockwood.

"Even if there are no findings against the officers, it doesn't mean they are not responsible or didn't use excessive force," said Shaketa Redden, the group's organizer. "We have been consistently in touch with Jose Hernandez-Rossy's family to support them and to make sure they get justice for their son and brother."

She said they wanted to meet with Lockwood to tell him that the officers involved in not only Hernandez-Rossy's death but those involved in Wardel Davis' death as well should all be fired.

Pastor Kinzer Pointer of Agape Fellowship Baptist Church met with AG investigators Thursday about the findings of the report. "This process so far is proving to give the kind of information that we've never had access to," Pointer said. He was part of a group of religious leaders who asked Cuomo in 2015 for legislation to require independent investigations in police involved shootings. "We cannot be  but pleased there is more light being shed and their families get some answers. But not all the answers will be satisfying. We did have loss of life."

The AG's office conducted a similar investigation into the death of another unarmed man, Wardel Davis, 20, who died during an encounter with two Buffalo police officers on Hoyt St. on the West Side of Buffalo on Feb. 7. The AG's office said Davis died of an acute asthma attack exacerbated by struggling with two police officers. No criminal charges were filed in that case.

Separately, it has opened an investigation into the Buffalo Police Department's use of traffic checkpoints and sweeps in public housing units, prompted by a complaint filed by Black Lives Matter Buffalo.

Dead suspect's sister: 'No justification' for Buffalo police shooting him