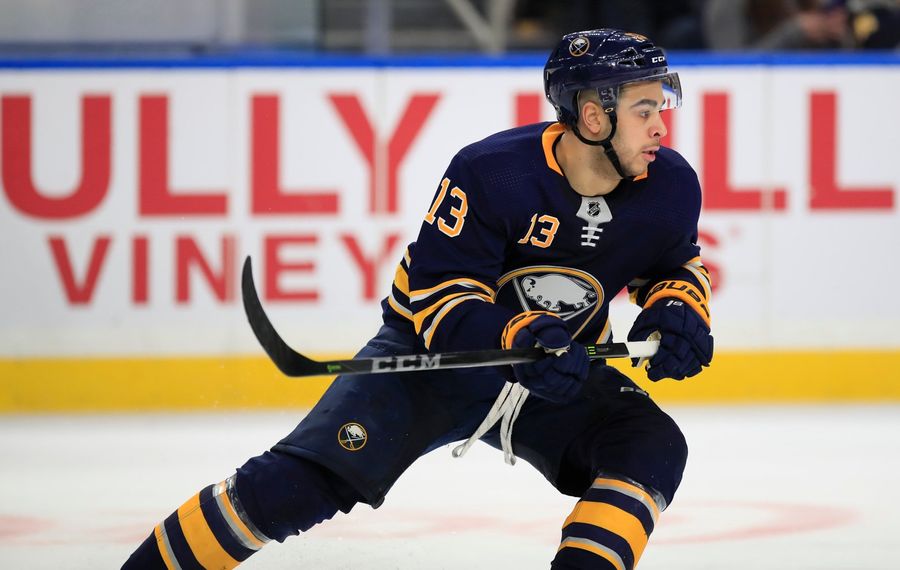 It's been an unbelievable rookie season for C.J. Smith. The Rochester Americans forward not only was named an AHL All-Star but took home Most Valuable Player honors Monday night.

Smith scored the only goal of the championship game as the North Division defeated the Pacific Division for the AHL All-Star Challenge title. He finished the round-robin tournament with three goals and two assists.

The result didn't surprise Nick Baptiste, who has spent the better part of the season with the Amerks and tuned in Monday night to watch the AHL All-Star Game.

"I did catch it and I watched C.J. tear it up pretty good," said Baptiste Tuesday morning in KeyBank Center as he prepared for his seventh NHL game of the season with the Sabres. "I've watched C.J. do that for Rochester all year. ... I'm happy to see him to do that because he's a great player and a great guy.

"He's a skill guy. He makes plays," Baptiste said. "He's a guy that's dangerous around the net. He's got great, great hockey sense and great vision. He's a great player who's going to be a great player for a long time."

The North leads 1-0 with less than three minutes to go! #AHLAllStar pic.twitter.com/1XvEXrMjZs

Sabres coach Phil Housley had high praise for Smith and what he's done in his first season of pro hockey.

"I think he deserved to be there, No. 1, great for him to get the MVP; No. 2, he's earned it," Housley said. "It's a great confidence booster for him. I did not get to see it. I saw the introductions but it's great to see those guys have fun and that's what it's all about. It's about representing your team in Rochester and representing the Buffalo Sabres organization and I tip my hat to him to win the MVP and win the tournament."

Smith ranks third among rookies in the AHL in scoring with 38 points (14 goals, 24 assists) through 45 games. The Amerks are tied with the Wilkes-Barre/Scranton Penguins for second place in the Eastern Conference.

The culture in Rochester has helped players develop, from guys on minor league contracts to prospects like Baptiste who scored his first NHL goal of the season, fourth in his career, in the Sabres' 4-0 win over the Canucks in Vancouver. The goal came midway through the second period, giving the Sabres a 2-0 lead.

"It was play where we made them turn the puck over and I was able to use my stick, jump to a hole and create an opening," Baptiste said. "When you're playing with guys like (Benoit Pouliot and Evan Rodrigues) who can make plays sometimes they find you in open areas and that was the case right there.

"It's exciting, obviously. It was a big goal in the game which I'm happier about. It was a goal that gave us a 2-0 lead in a game we wanted pretty badly in terms of the morale of this team. It was exciting to get the win and nice that I could contribute."

This is the second recall of the season for Baptiste, who played four games for the Sabres from Nov. 7-14 but he had no points and four combined shots in those games and went back to Rochester to work on the little things.

And the little things, Baptiste is learning, really do mean a lot.

"I'm playing with a lot of speed," Baptiste said. "I'm playing with a lot of physicality and I think if you watch, I get in on the forecheck first. I'm doing the little things that Coach Housley wants me to do and he seems to be rewarding me by keeping me in the lineup. I was rewarded with a goal last game, but I think it's more than that for me. Scoring for me is obviously something that I want to do but it's not my focal point right now. It's making sure I do the little things right, doing the things that will make me stay in the lineup."

Baptiste played 8:30 in Tuesday's 3-1 loss to the New Jersey Devils and was credited with one shot attempt that was blocked and one takeaway.

Miles Wood has speed. Lots of speed. It's what makes him a dangerous offensive threat for the New Jersey Devils and what helped the left winger, who was born in Buffalo, score the game's opening goal on Tuesday.

Wood scored his 14th goal of the season when he blew by Sabres' defenseman Rasmus Ristolainen then made a sweet move to his backhand to beat Robin Lehner at 5:49 of the second period.

"Obviously Woody is a tough guy to hold coming down the wing like that with that speed," said Devils defenseman Andy Greene. "There's honestly not many guys when he's moving like that that can stay with him. When you have that you've got to use that to your advantage and we did a little bit tonight."

Miles played 60 games for the New Jersey Devils last year. This season he was a healthy scratch on opening night and has played every game since.

One of the most popular Buffalo Sabres of all time has his own bobblehead. Fittingly, the Rick Jeanneret version talks.

The Sabres have unveiled a talking bobblehead of their Hall of Fame announcer, with all proceeds to benefit the Sabres' foundation and the Kevin Guest House, which provides a comfortable and supportive home for patients and families traveling to Buffalo for medical care.

Each bobblehead features five Jeanneret play-by-play calls and can be purchased for $30. Autographed versions are available for $75. Fans can purchase the bobbleheads at the Sabres Store or online at Sabres.com/RJ. Online orders can be shipped or picked up free of charge at Account Services in KeyBank Center.

In addition to the bobbleheads, a special $150 meet-and-greet package will be available for purchase at Sabres.com for a limited time. These packages include one Jeanneret talking bobblehead, two 300 Level tickets to see the Sabres host the Boston Bruins on Feb. 25 and an exclusive meet-and-greet with Jeanneret prior to the game.

“We are so grateful to our longtime friends at the Buffalo Sabres and John W. Danforth for helping to raise funds and awareness of Kevin Guest House with this one-of-a-kind Rick Jeanneret bobblehead,” said Lynsey Zimdahl Weaver, executive director of Kevin Guest House. “Keeping families close is the best medicine, and it's our mission to provide a comfortable and supportive home away from home. As we take on our first-ever expansion to double the number of guests we can serve, these funds will allow us to support more patients and caregivers traveling for critical medical care.”

There was a local connection in Tuesday's officiating crew at KeyBank Center as West Seneca native James Tobias was one of the linesmen.

He played hockey for the West Seneca Wings decided at 18 to try officiating. He worked as an official in the NCAA, Eastern Collegiate Athletic Conference and Atlantic Hockey from 2013-17. He was hired by the American Hockey League as a linesman after his work at the NHL Exposure Combine Camp. He worked 20 AHL games last and made his NHL debut Nov. 22 in a game between Toronto and Florida.

Tobias graduated in 2017 from Canisius College with a degree in biology and a minor in neuroscience and psychology.