It's time for grandparents to dust off their pilsner glasses and brush up on beer-drinking stories from decades long ago. A retro version of one of their old standards is about to hit regional brewing circles.

Community Beer Works is at work on a new, $1.5 million brewing operation on the West Side that looks to bring the Iroquois Beer brand back in force come late spring.

CBW and a descendant of former Iroquois brewery owner William Weigel are so excited about their joint venture, however, that they don't want area beer-lovers to wait that long for a taste of what's to come. They will host an Iroquois Beer launch party from 5 to 9 p.m. Feb. 1 at the Hotel Henry Conference Center.

"This beer is going to be a nice, easy drinking beer, something people can enjoy drinking in pubs and taverns after work," Community Beer Works President Ethan Cox said. 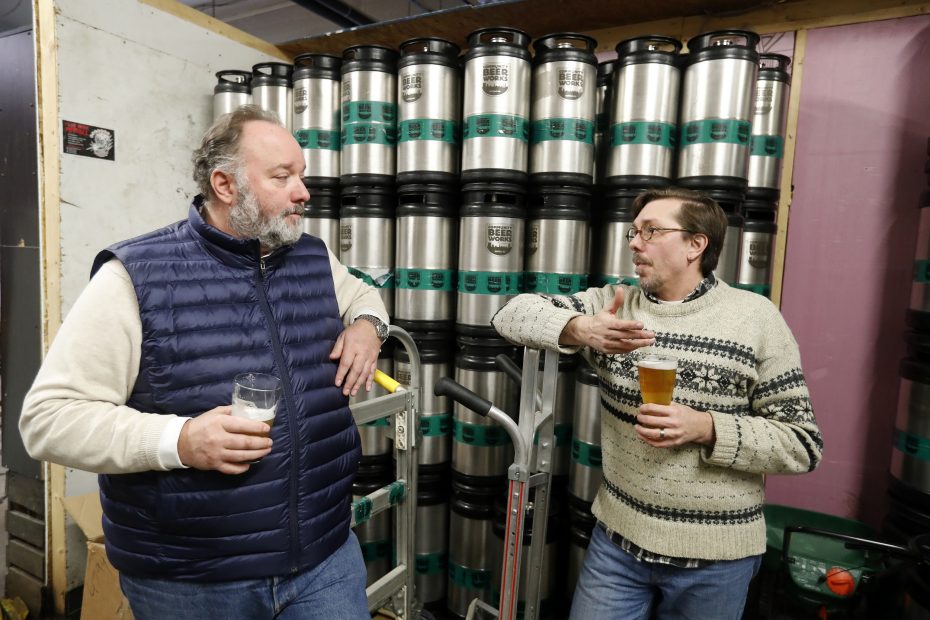 Cox and Willard "Bill" Pottle III, great-grandson of Weigel, have reached a brand licensing agreement in which Pottle will lend the Iroquois name and his sales and marketing prowess to CBW, which will brew Iroquois Beer and arrange its distribution.

The brand will account for at least 20 percent of production at the new brewery, which Cox hopes will roll out 5,000 barrels of Iroquois and CBW brand beers the first year in its new location at Seventh and Jersey streets, on the West Side.

"We're poised to increase capacity quickly," Cox said. "We feel this beer is going to demand it."

Cox and Pottle will bring 14.5 kegs of the light lager to the launch this week. It will be the first time in more than three decades that beer drinkers will be able to order an Iroquois – though those who remember its flavor will taste some subtle differences.

Pottle still has his great-grandfather's brewer's diploma and other Iroquois memorabilia, but the beer recipes are long gone, he said.

Cox said some of the malts and hops used to brew the original beer are likely no longer grown.

The goal with Iroquois is to open the craft beer market in Buffalo to drinkers who haven't tested the waters and are skeptical of heavier, more bitter brews.

"We were looking for something lighter, not heavy hopped, easier, drinkable. Something that we think the people here in Buffalo drank years ago," Pottle said.

"We should be Buffalo's old style," Cox said. "We should have that same level of resonance and buy-in. The beer is similar, too. It's a modern, light American lager."

During its zenith in the 1950s, as many as 550 workers brewed as many as 500,000 gallons of Iroquois Beer annually – producing as much as 40 percent of all beer consumed in Buffalo. Its radio advertising jingles and TV commercials became part of the community fabric during that era, as well.

Iroquois traces its beginnings to the Jacob Roos Brewery, founded in 1842. Leonard Burgwerger merged the Roos Cooperative and Ziegle Brewing Co. in the early 1890s under the Iroquois brand and built a new brewery at 230 Pratt St., near William Street and Broadway, about a half-mile east of downtown. Weigel, owner of the Weyand & Weigel Bottle Works, bought the brewery from Burgwerger not long afterward. The brewery closed in 1971.

5 to 9 p.m. Feb. 1 at the Hotel Henry Conference Center, 44 Forest Ave. Admission is free; glasses of beer will sell for $5 for as long as the Iroquois lasts. Visit iribeer.com or communitybeerworks.com.