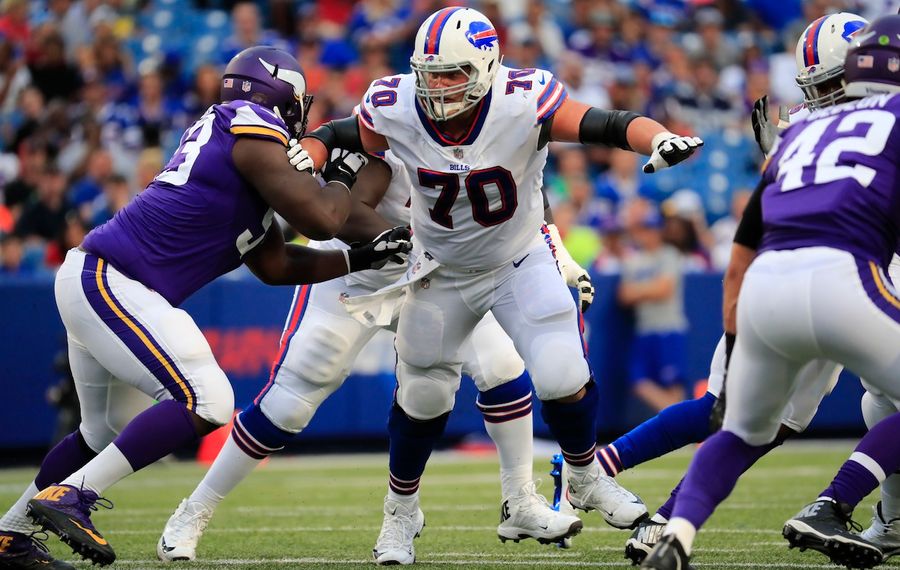 It was an unexpectedly bizarre day Monday at One Bills Drive. “The stage was set for a formal retirement announcement by Buffalo Bills center Eric Wood,” writes Jay Skurski for BNblitz, but what the public got instead was an “awkward statement that lasted a little more than 90 seconds and did not include the word ‘retire.’” Wood arrived nearly an hour late and did not take any questions from reporters.

“The biggest unanswered question would be why the two sides went through with a press conference given that there are obvious issues to work out,” Skurski writes. “As is often the case in these situations, money is at the root of the discrepancy.”

“Wall worthy”: Former Buffalo Bills tackle Will Wolford said Monday that Wood’s career – though it didn’t end in ideal fashion when he was diagnosed with a damaged disc in his neck – was “Wall worthy,” referring to the Bills’ Wall of Fame.

A ‘wrong turn’: Wood’s awkward presser was an “embarrassing moment,” The News’ Bucky Gleason writes, and made him “look like another petty professional athlete.” Gleason called it “one of the more bizarre hours along One Bills Drive in recent memory.”

Fitz steals the show: Former Bills quarterback Ryan Fitzpatrick was in attendance to honor Wood, and his shirt spoke a thousand words. Oh, and Fitz says he’s not yet ready to retire.

A community fixture: The reasons to “extra like” Eric Wood had nothing to do with football, writes News columnist Sean Kirst.

Waufle retires: After a 20-year NFL career, Bills defensive line coach Mike Waufle has retired. He attributed the decision to chronic pain that he suffers as a result of his playing days. The Bills promoted assistant Bill Teerlinck to defensive line coach.

Thursday night injuries: Newly released data from the NFL shows a year-over-year increase in injuries during Thursday Night Football games, and a higher rate of injuries in Thursday games than in games played on Sunday or Monday. Maybe Richie Incognito had a point.

Top Five: Buffalo is No. 4 on WalletHub.com’s list of America’s best midsize football cities. The city ranked No. 21 overall.

Party at Poyer’s: Bills defensive back Jordan Poyer said on Twitter that he’s having a Super Bowl party, and anyone in South Florida is invited.

Brady upset: Tom Brady indicated he might end his longtime relationship with a Boston radio station after host Alex Reimer called his daughter an “annoying little pissant" last week. Reimer was suspended for the remark.

Speaking of Brady: Reporting from the Super Bowl in Minnesota, News columnist Jerry Sullivan asks if one more championship ring is in the cards for the Patriots legend.