On any given day in Buffalo, you can stroll up to a food counter and customize your pizzas, tacos, ice cream and subs. And now, your poke bowl.

Poke, pronounced POH-kay, is one of Hawaii’s quintessential dishes, a classic American snack as versatile and beloved as chicken wings.

Fresh Catch Poke Co., a fast-casual restaurant across from Williamsville South High School on Main Street, opened on January 19 with one ambition: to be Western New York’s dedicated source for sustainable poke. 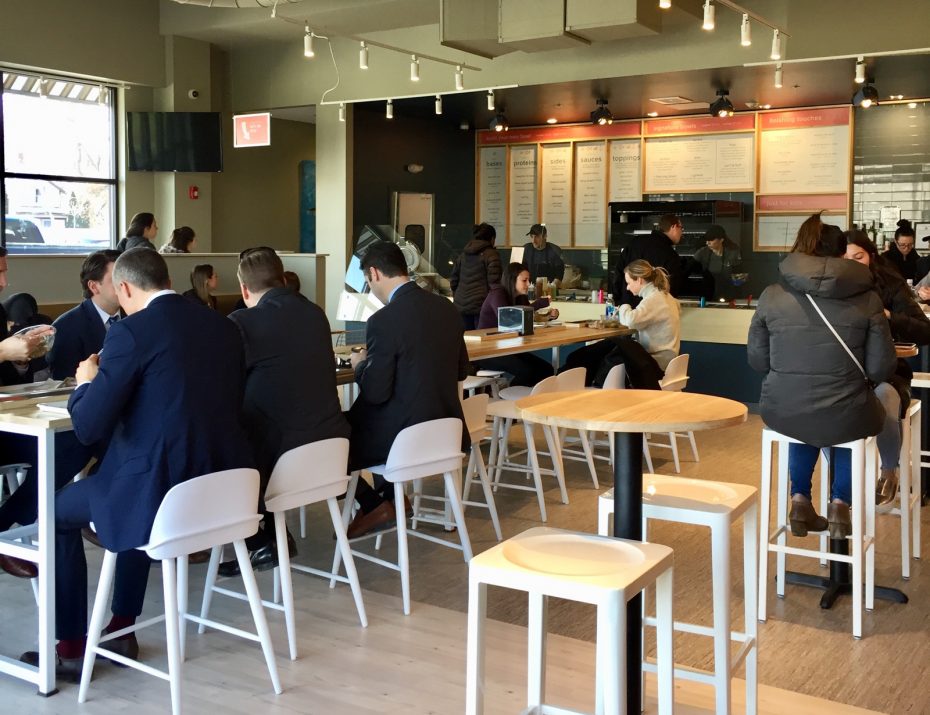 Hawaiians call it a “pupu,” or appetizer. Others call it deconstructed sushi. Regardless, poke has become a darling of the meals-in-a-bowl trend to sweep the mainland in recent years. Its name means “to cut crosswise,” referring to the scoop of chopped raw fish (typically tuna, either skipjack, known as ahu, or ahi, the popular yellowfin) served lightly marinated over a bowl of short-grain rice.

While there are countless interpretations by home cooks and fine dining chefs alike, the best are layered with simple combinations of proteins (salmon, octopus, even chicken or tofu), vegetables and sometimes nuts. 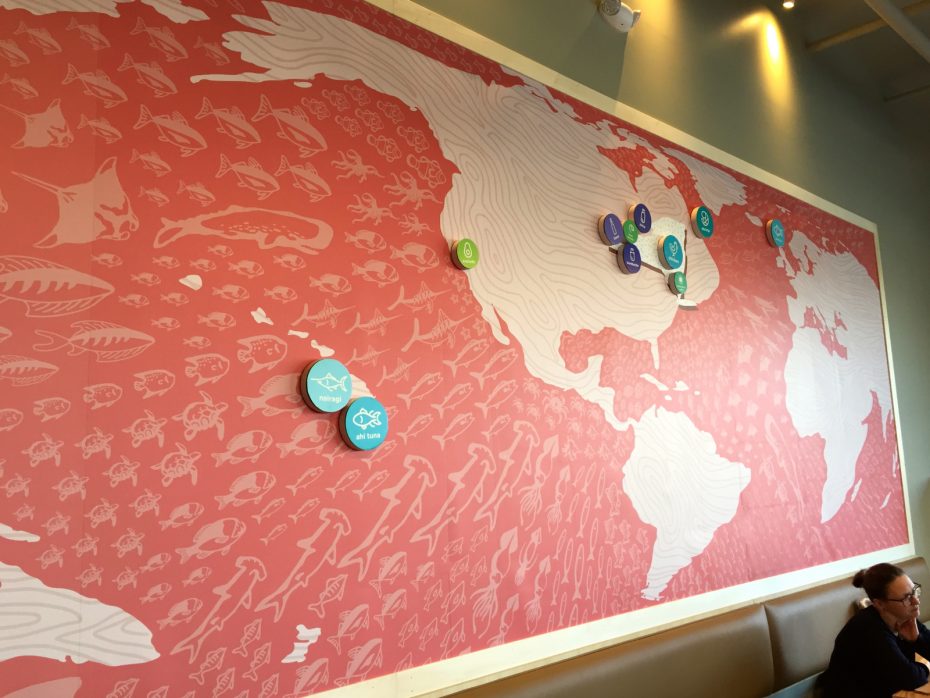 The source map at Fresh Catch Poke Co. pinpoints the origins of the restaurant's seafood, which is shipped in three times a week. (Lauren Newkirk Maynard/Special to The News)

From there, chef Vathanathavone “Tutu” Inthalasy, formerly of Kaydara Noodle Bar, chops the fish into large dice over jasmine or green “bamboo” rice. The latter is jasmine rice with a slight vegetal flavor from an infusion of chlorophyll—a discovery Tobin made during poke-hunting trips to the West Coast.

The menu is split into two main sections: “build-your-own” bowls ($10.95 or $13.95) and “signature” bowls ($10.95 or $14.95), each in two sizes. There are currently two vegan options, the Flaming Jewel and Green bowls, featuring veggies such as “torched” sweet potato, watermelon radish and edamame. More vegan items are on the way, Tobin says.

At the counter, a small team of glove-clad folks help you choose from dozens of ingredients, most raw, although there are plans to experiment with an air fryer for savory cooked items, such as roasted eggplant. 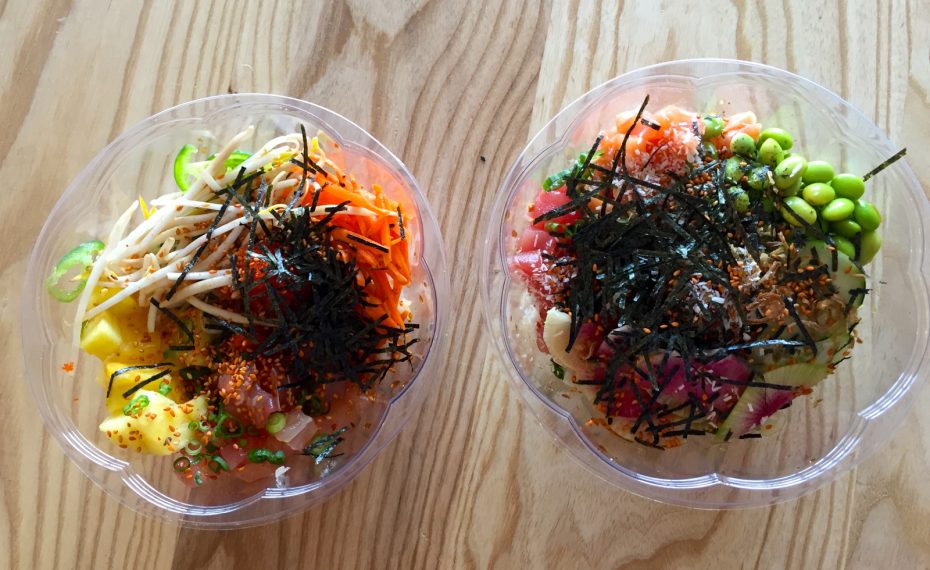 For the custom bowls, you start with a base of rice, cauliflower rice, mixed greens, noodles or seaweed salad. Then the proteins: seafood, tofu or grass-fed chicken, followed by sides such as avocado, imitation crab and pineapple.

For a dash of extra flavor, each order gets up to four toppings. Fans of Japanese and Korean cuisine will find tobiko (flying fish roe), sriracha sesame seeds, kimchi and shredded nori along with raw jalapeno slices, pickled beets, toasted coconut and other seasonal choices.

On a recent visit, my table’s two signature bowls, a regular “Ono” and a deluxe “FCPC,” had ample portions of rice under a rainbow of vibrant textures, but the ponzu dressings were subtle, to the point of being invisible. A drizzle of hot sauce, added tableside, amped up the flavor. 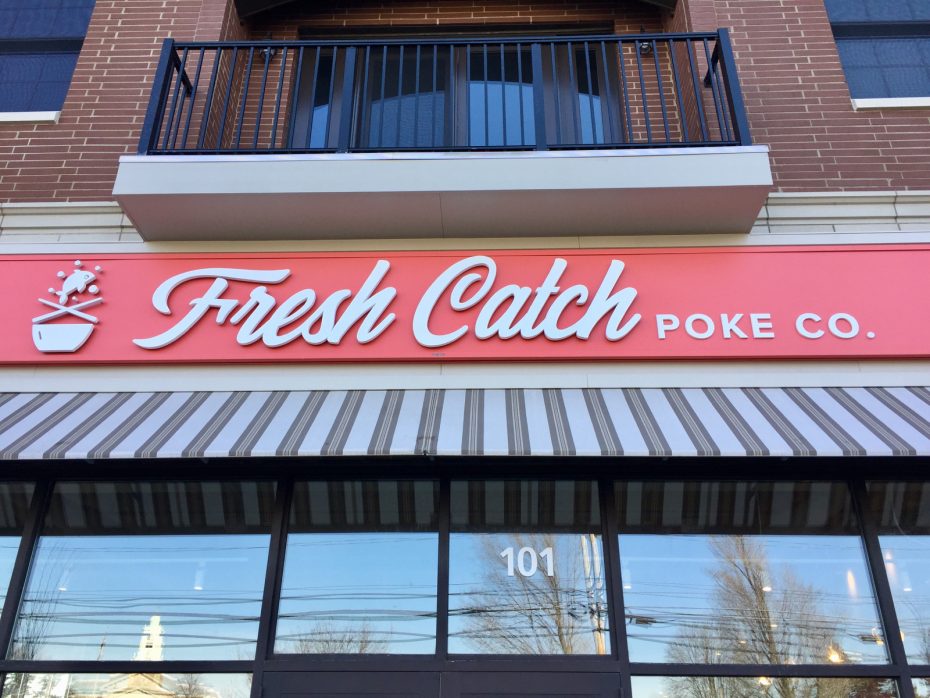 The nairagi (marlin), salmon and tuna in the bowls did taste incredibly fresh, and I enjoyed the crunch of coconut, watermelon radish and fried onion in the FCPC. If you like contrasts, the Ono delivered with sliced jalapeno and pineapple.

We ordered locally brewed Snowy Owl kombucha ($4), a tart, fermented tea that was equally as refreshing as the seafood. Other beverages include Buffalo and Hawaiian beers, cans of wine and sake ($5-$10) and organic pressed juices ($6.50).

For football fans looking for something new to serve at the big game Sunday, one or half-pound portions of poke are available, tossed in any of the sauces and served with green onions, sesame seeds and tobiko (market price).

Taro chips ($3.50), homemade soups (not yet available on our visit, price varies), chia parfait ($5.25) and macarons by local baker Camille LaCaer ($3) round out the menu, which can be ordered online for takeout. At the time of this article, the online system and app were not working.

As far as the philosophy behind the fish, Fresh Catch seems earnest. Its Real Food certification means that its food has been audited for eco-friendly sourcing, preparation and packaging. The plastic tableware and serving containers are biodegradable and compostable, and its suppliers are part of the Seafood Watch Program, an international, sustainable seafood initiative.

The poke, while not designed to be authentically Hawaiian, is fun to order and fun to eat, aided by the bright, contemporary corner space. With time and tweaking, Fresh Catch may prove that raw fish bowls can, in fact, hook a wing-and-weck crowd.