A friend of the Conti family who requested anonymity told The Buffalo News that Joseph Conti admitted to her he accidentally set some bedding on fire while using a blowtorch to light a cigarette. The fire spread and his 7-year-old son, Anthony David, died in the three-alarm fire that destroyed their family home Monday.

Several TV news stations also reported that unnamed sources had told them that Conti accidentally started the fire while lighting a cigarette with a blowtorch.

Joseph Conti has not given an official statement to investigators, who are in the process of scheduling a time to speak with him, Buffalo Fire Department Lt. James Otwell said Tuesday morning.

Otwell, commander of the Fire Investigation Unit, said the cause of the blaze remains under investigation.

Buffalo police spokesman Michael DeGeorge did not respond to requests to comment on that allegation.

When firefighters arrived at the scene Monday morning, they were told there were several children inside the house, said Fire Commissioner Vincent V. Muscarella. But Anthony was the only one who couldn't get out. Firefighters found him in the kitchen, 4 to 6 feet from a bedroom.

Firefighters performed CPR on the boy at the scene and on the ambulance ride to Oishei Children's Hospital, Muscarella said. Doctors there also tried to revive him, but there was nothing they could do to save Anthony. Preliminary autopsy results indicate the second-grader at Lovejoy Discovery School 43 died of smoke inhalation.

"It's heart-wrenching for that family and for the Lovejoy community and for the firefighters," Muscarella said.

Standing in front of the charred remnants of his house on Benzinger Street Monday, Conti's face was red, peeling and covered in blisters.

"I failed him," he cried as neighbors wrapped their arms around him.

Just hours earlier, powerful flames shot through the top of the house as firefighters battled the raging fire in below-freezing temperatures.

Conti described the chaotic scene he encountered shortly before 3 a.m., saying he had just come out of a bathroom when he saw fire in a first-floor bedroom.

But he could not.

Conti said he had to flee the house without saving his son because of the smoke and flames.

"I was inhaling toxic, black smoke," Conti said. "I was getting burned. I was breathing the fire in my nostrils and my throat. I couldn't stay in there."

The parents weren't sure which rooms their children were in. They often sleep in each other's rooms, he said.

"We come out and Anthony wasn't out," Conti said, "and it was so confusing."

Conti found Aria on a couch near the front of the house and scooped her up on his way out, Common Councilman Richard A. Fontana said later at a news conference.

The Rev. Vlad Zablostkyy, a priest at SS. Peter and Paul Orthodox Church who lives across the street from the Contis, heard the commotion and came outside.

"I cannot describe the cries of the mother," the priest said, standing on the steps of his house. "She was screaming: 'Anthony is inside.' "

Joe Conti tried to go back inside the fire, Zablostkyy said, but firefighters held him back.

"They were restraining him," the priest said. "It's devastating. It was such mayhem."

A candlelight vigil that attracted more than 250 mourners was held Monday evening in SS. Peter and Paul Orthodox Church to honor the boy and offer support to his extended family. Members of the racially diverse crowd hugged and consoled each other throughout the service, while others held onto balloons and stuffed toys before Zablostkyy passed out tapered candles.

Firefighters with Engine 28 arrived at the scene within two minutes of the fire being reported, Muscarella said.

Firefighters faced many challenges in battling the blaze. Benzinger is a narrow street and firefighters couldn't get all of their apparatus in front of the burning house, as they prefer to do, Muscarella said. It was also cold, with temperatures in the upper 20s, causing the water from the hoses to freeze up.

About 70 firefighters responded to the scene which was declared a three-alarm fire. One firefighter suffered minor burns in the blaze, officials said.

Corey Bald, 24, who lives on Gold Street behind the house, described hearing "large booms" as firefighters used chainsaws to cut away sections of the house to try to keep the fire from spreading.

Muscarella said the house had "balloon frame construction," where the studs of the house go from the basement to the attic with no stops between floors. Fire travels quickly in those types of homes, he said.

Firefighters who went back in after the fire was out scoured the house for any items that could be salvaged and created little care packages for the surviving family members, said Fontana, who was leading an effort to help the family.

As news of the fire spread, friends and family brought clothes, household supplies and toys to the Mead Library on Ludington Street and began making plans for a benefit for the Conti family.

“It’s flattened. There’s not even a roof,” Conti said. Bits of ice – frozen water from the firefighter's hoses – dropped on the blackened ruins of the house. A burned and tattered American flag hung from a porch pillar.

His eyes red from crying, the grieving father smiled as he talked about his son. 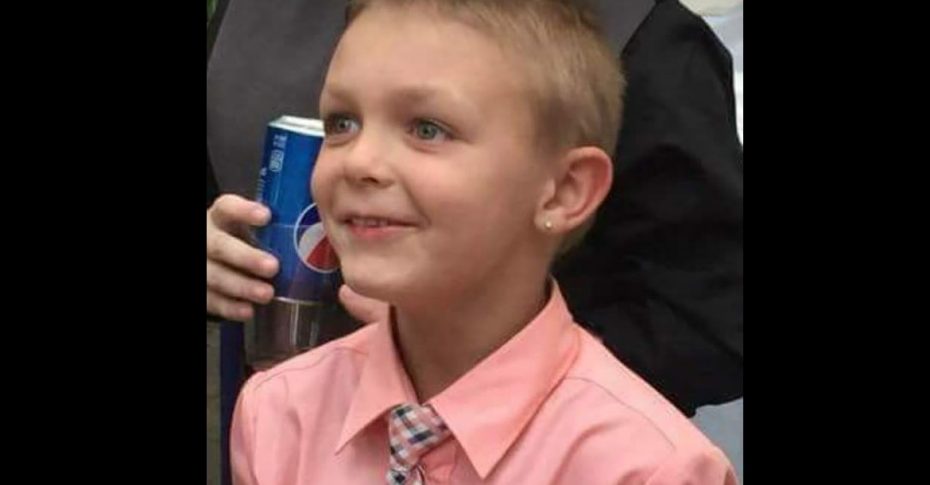 Anthony Conti, 7, died in a fire at his home early Monday. (Photo courtesy of Conti family)

Anthony was shy and silly and always had a smile on his face, his father said.

"He was the most awesome boy you'd ever want," he said.

Neighbors and friends gathered around Joe Conti in the street. A new neighbor who has an empty second floor apartment offered it to him. George Johnson with the Buffalo United Front gave Conti his hoodie and his gloves. "It's going to be all right," Johnson told Conti.

The Common Council announced that donations will be collected from 9 a.m. to 5 p.m. all week at Mead Library, 126 Ludington St. to help the family. A GoFundMe.com fundraising campaign was set up to collect monetary donations.

An official from the American Red Cross in Buffalo said the agency would be providing the Conti family with shelter Monday night.

Zablostkyy urged anyone who can help to do what they can for the Contis. "The family – they need all the help they can get."