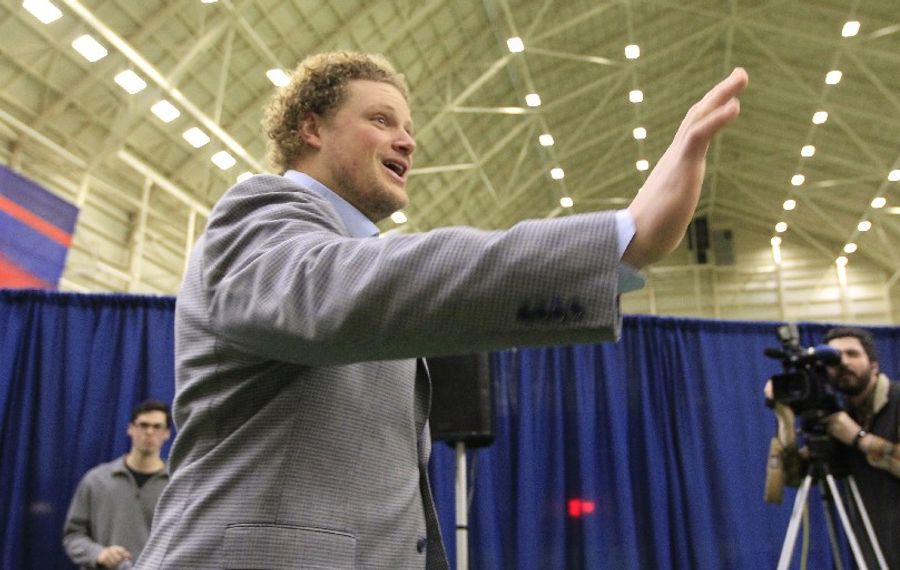 Ryan Fitzpatrick shared a funny story Monday about Eric Wood and their time together with the Bills. It goes back to the 2011 season, when the Bills won their first three games before playing the Bengals in Cincinnati. Wood was playing his first NFL before family and friends in his hometown.

"He was jacked," Fitzpatrick said. "We're coming out of the tunnel, and he leads the team out on the field, and he runs to the Cincinnati sideline. He gets about 35 yards out and realizes it, and he has to take an immediate left to jog over to our sideline. It was one of the more embarrassing moments for him."

Wood took another wrong turn in another embarrassing moment Monday, when his family, friends, former teammates and the media assembled for a news conference that was designed to double as a retirement ceremony. It turned into an apparent dispute over money that made Wood look like another petty professional athlete.

The same man who was widely respected for being a standup guy showed up 56 minutes late for a news conference that he called, spoke for one minute and 42 seconds while reading what sounded like a sloppy, hastily written statement and walked off without taking any questions.

Wood basically told everyone in attendance what they already learned last week, that a neck issue forced him from the game he played since he was a kid and turned him into a wealthy man. He made a point not to use the word "retire," relying on semantics to deliver a message that sounded more like testimony than gratitude.

It's important to consider the source in what evolved into one of the more bizarre hours along One Bills Drive in recent memory. For nine years, Wood stood before the masses and answered questions that were much tougher than the ones that would have been raised had his news conference gone off without a hitch.

Because he was so late, and his behavior was so out of character, he invited more questions. The delay was caused by a late arrival by Wood and then a call between Wood and his agent. After Wood walked away from the microphone, Bills GM Brandon Beane answered questions but offered little insight saying the day was reserved for the veteran leader.

Eric Wood says he can't play again, but does not announce retirement

Wood's actions made you wonder about the effect of a dispute brewing behind the scenes, as if he was fighting off an attempt by the Bills to get back a portion of the bonus money from a contract extension he signed in August.

I'm not going to pretend to know details of Wood's deal. There are so many zeroes and commas involved that it can be difficult to put contracts into proper perspective. But I do know this: Wood played nine seasons in the NFL, more than doubling the average length of a career, and made more than $43 million.

It doesn't mean he should allow the Bills to take advantage of him, if that was their intention. They should abide by a deal they signed when handing him a two-year extension, before there was evidence of a neck problem. Terry and Kim Pegula deserve criticism for numerous missteps, but they've never been accused of being cheap.

Perhaps there was more to the story, such as him having a difficult time processing the reality of the abrupt ending. Or maybe he wanted to consult with more doctors while keeping a sliver of hope he would continue. But the absurdity of the afternoon left many rolling their eyes and shrugging their shoulders.

"The finality of it, that, 'you are done' and the decision was made for him, that's a tough way to end it," Fitzpatrick said. "It's something you have to work through. I'm proud to call him a teammate. I think everybody that played with him – besides his hair at times and the stink coming off him – there's a lot of positive memories."

OK, so why the big show Monday?

It's among many questions that would have been asked if Wood made himself available after reading his statement. The mess Monday didn’t appear to be caused by the Bills, who facilitated Wood's request for a news conference he announced last week. In short order, a celebration dissolved into a charade.

Public Relations 101: Don't call a news conference without having something to say and answering a few questions. He should have canceled the event after realizing there was a problem. Anyway, it was odd for them to put together a grandiose display for him in the ADPRO Sports Training Center in the first place.

Wood, a good player on several bad teams and a better human being, invited too many people to squeeze into the media room. This is no offense to him, but we're not talking about Jim Kelly or Thurman Thomas or another icon in Bills' history. Rest assured the Bills will think twice before again being placed in such an awkward position.

FYI: The vast majority of players don't decide when their career ends. The decision is usually made for them, and they leave kicking and screaming. The news that Wood played his last game sent a jolt through the organization, the community and beyond when he should have been counting his blessings. The real shame was in how it was handled.

In fact, he was a lucky man.

Wood had an extended career in the NFL's trenches after earning a scholarship from the University of Louisville. He walked away from the game relatively unscathed. Doctors may have spared him from a tragedy that could have been far worse. Maybe he'll return and acknowledge as much someday. By then, it will be too late.

Sean Kirst: The reasons to 'extra like' Eric Wood had nothing to do with football