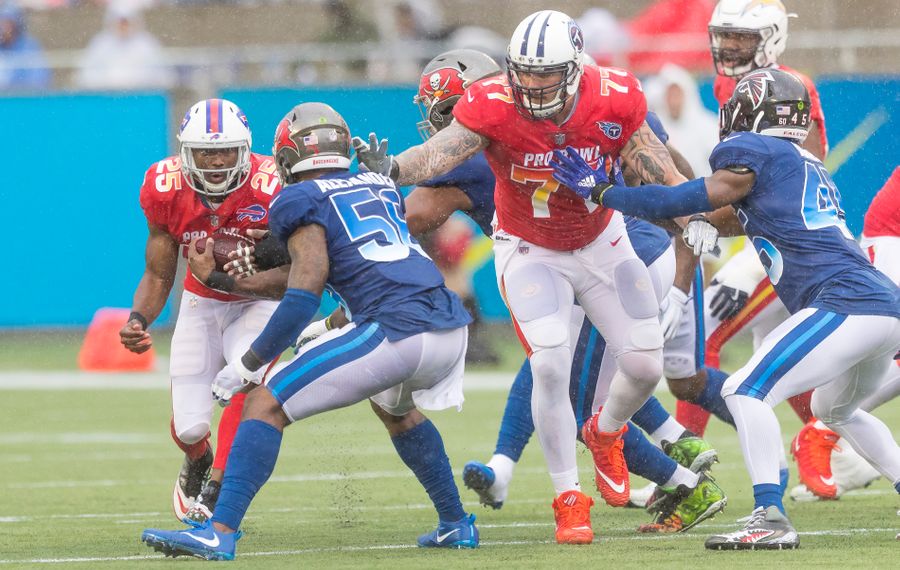 LeSean McCoy scored a touchdown and celebrated in the end zone with Bills teammate Richie Incognito during the AFC squad's 24-23 comeback victory at the Pro Bowl in Orlando, Fla., on Sunday.

"What's the significance of that, you ask?," Jay Skurski writes. "Members of the winning AFC team earned $64,000 each, while those on the NFC squad received $32,000. That extra $32,000 is evidently enough to get even millionaires motivated."

Perhaps that's why Bills safety Jordan Poyer was "salty" about not playing in the game.

Incognito issue ignored: From Skurski's recap, "Not surprisingly, the ABC broadcast team of Sean McDonough and Matt Hasselbeck did not mention Incognito during the game, as he continues to be the subject of an NFL investigation over accusations he made racist comments to Jacksonville Jaguars defensive end Yannick Ngakoue during their playoff game earlier this month. Incognito and Ngakoue reportedly cleared the air during the practice week leading up to Sunday's game."

Path to the Passer: Is Baker Mayfield the next Drew Brees? Mark Gaughan begins a series of feature stories on potential quarterbacks for the Bills.

Seven players who helped their stock at the Senior Bowl: Three quarterbacks on this list not named Baker Mayfield.

'It was fun to be his teammate': Kyle Williams' reaction to Eric Wood's retirement, as told to Vic Carucci.

Inside the Bills: Ryan Groy is ready if called on to replace Wood again.

Donations continue: Bills fans have given more than $30,000 to the Eric Wood Fund for Children's Hospital of Buffalo Foundation since Friday, nearly half of the organization's annual fundraising goal.

Jerry Sullivan: Forced retirement of Eric Wood leaves hole on field and in the community.

Sully's Mailbag: With six former Bills on the Eagles roster and coaching staff, does Buffalo get any kind of redemption if Philadelphia defeats New England in the Super Bowl?

Recommended reading: In the face of cancer, Bills icon buoyed by #PanchosPick. Column by Sean Kirst.