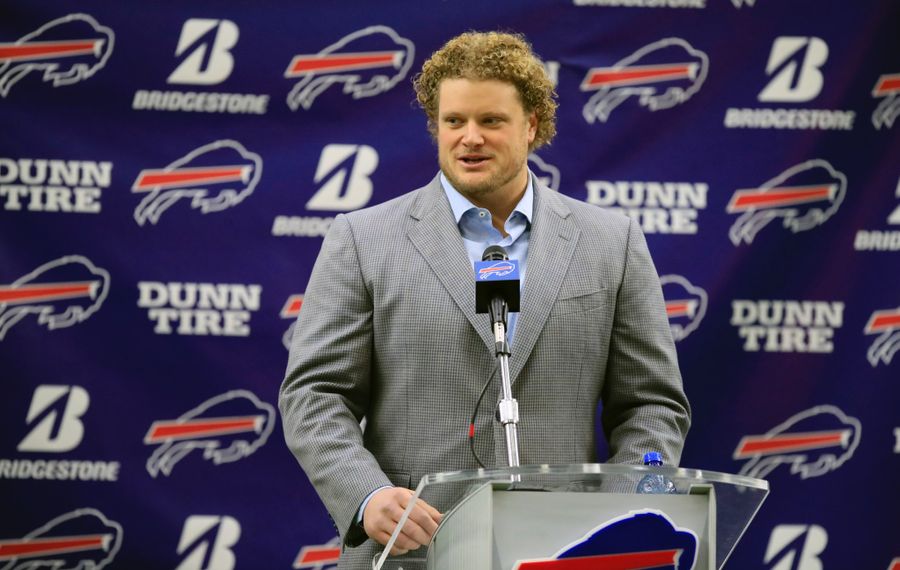 The stage was set for a formal retirement announcement by Buffalo Bills center Eric Wood.

Current and former teammates, family, friends, several members of the Western New York media and a slew of team employees gathered inside the ADPRO Sports Training Center on Monday for a press conference that was to feature Wood, coach Sean McDermott and General Manager Brandon Beane.

The assembled crowed waited ... and waited ... for nearly an hour, before Wood took the stage – which is usually reserved for the announcement of new head coaches or even team owners – and delivered an awkward statement that lasted a little more than 90 seconds and did not include the word "retire." He then left the stage and did not take any questions.

Wood confirmed what was reported Friday, that he has suffered a neck injury that leaves him unable to continue playing football.

"This press conference was set up a couple of weeks ago, in light of me finding out about the injury an hour before my son, Garrett, was born," he said. "As many of you already know given the leak on Friday, Dr. Cappuccino has informed me I will no longer be able to play football given the neck injury. Even with further treatment, rehab or surgery, a return is not possible."

Wood said he suffered the first stinger of his career in Week 5 during a loss to the Cincinnati Bengals in early October, then got another one in the team's next game.

"After that game, we did an X-ray on my neck that showed no significant damage," he said. "After the season, as part of the exit physical, we got an MRI that revealed a disc that was dangerously close to my spinal cord at C-2, C-3. That was alarming. As you can imagine this news floored me as I was merely days away from the first playoff game of my career."

So why the awkwardness? Because of what followed.

"Although I will no longer be cleared to play football, I am still on the Bills’ roster and look forward to helping out the team in some capacity," Wood said. "Thanks to everyone who supported me throughout my career. Because of that, I am here today. I’m sure there are a lot of unanswered questions, and I hope to address those at a later date. Thanks, and go Bills."

The biggest unanswered question would be why the two sides went through with a press conference given that there are obvious issues to work out. As is often the case in these situations, money is at the root of the discrepancy.

Beane said the team does not have any space under the salary cap because it rolled over its unused amount from 2017 to the 2018 cap. That means any transactions have to wait until the start of the new league year March 14.

"He’ll be on our roster for a while, until we figure things out," Beane said. "We’ll get it worked out. He’ll do stuff on his end and we’ll do it with the help of the league office and the management council and we’ll figure it out from there."

Beane and McDermott did their best to keep the focus on honoring Wood for his nine-year career with the team. With current and former teammates such as Ryan Fitzpatrick, Lorenzo Alexander, LeSean McCoy, Jordan Mills, Garrison Sanborn and Kraig Urbik in attendance, the expectation was for an emotional goodbye from, and celebration for, one of the most popular players of the last decade.

Instead, as the clock ticked past the scheduled 1 p.m. start time, the situation grew stranger by the minute. Beane said Wood had arrived a little late and then had to take a call with his agent, but did not know what was discussed. Wood's agent, Camron Hahn, did not return messages.

"We'll figure out what's the best tactic for the Buffalo Bills as we move forward, but really, we're a long way away from figuring out where we're going," Beane said. "With the news, it happened fast for him and for us, too. We're all still soaking it in and trying to make the best decisions."

At issue could be the $6.5 million signing bonus Wood received when he signed his contract extension in August. The NFL's collective bargaining agreement allows teams to try to recoup a portion of that money in the event a player retires before the end of their contract. The Associated Press on Monday reported that there was a "gray area" about what happens when a player retires because of a career-ending injury.

It was not immediately clear if the Bills would want – or be obligated – to try to recoup some of that money. As for Wood, he obviously has a vested interest in making sure he times things right in terms of his contract.

Beane did his best to answer those questions while trying not to take the spotlight away from a fan favorite, as did McDermott, who sidestepped questions about whether Ryan Groy would take over at center and what possible role Wood could have with the team moving forward.

"I think it’s neat that he was able to get a lot of ex-players and friends and a lot of guys that are in this locker room here," Beane said. "That shows what Eric meant to the team and the community. I’d really rather just leave it at that. I think that’s the fair thing for him and for us right now."

Even though Wood never used the word "retire," both Beane and McDermott said it was their understanding his playing career was over.

"It’s a day to celebrate Eric and his career and what he’s brought to this football team and our community," said McDermott, who added that he did not believe Wood's injury impacted him during the season.

After Friday's announcement that Wood's injury would end his career, Bills fans flocked to his charity, raising nearly $36,000 for his Eric Wood Fund, with the money earmarked for support at the John R. Oishei Children's Hospital.

"I'm happy for him, happy for his family and what a great career that he was able to have," McDermott said. "The best part of it for me was it was all in one spot. Not a lot of players are able to say that at the end of a career and Eric, in this case, is able to say that."