If a building could talk, the former First Presbyterian Church in Clarence Hollow would have some stories to tell.

Built in 1844, Clarence area residents gathered for more than a century in the small country church to pray, marry and mourn.

But it sat vacant in recent years.

Kathy and David DeRose bought the former church at 10750 Main St. in 2016 for $210,000 with plans to open a retail farm store in a small adjacent building. But their daughter Rebecca encouraged them to develop the entire site as an events venue.

After months of restoration, the DeRoses reopened the church last month as Brickhall at the Hollow, which will host weddings and other receptions.

"We have tried to bring it back respectfully," said David DeRose. "We kind of like projects." 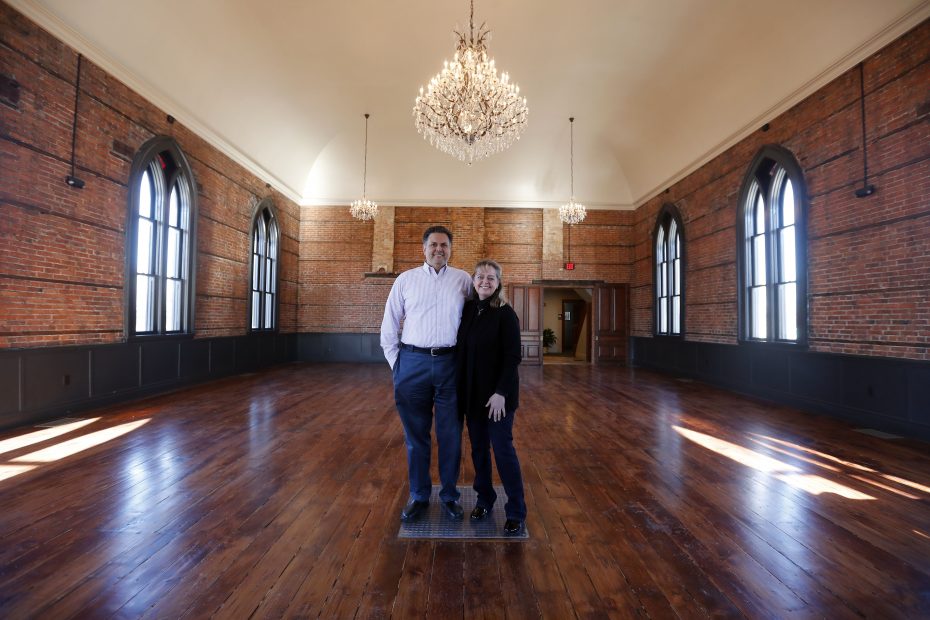 Owners David and Kathy DeRose stand in their new Brickhall in the Hollow, an events venue in the former First Presbyterian Church in Clarence, on Thursday, Jan. 25, 2018. (Mark Mulville/Buffalo News)

The First Presbyterian Church had stood at the corner of Main Street and Salt Road for 113 years. It was a church where Wilson Greatbatch, the inventor of the pacemaker and a church elder, had once taught Sunday school in the 1950s. As the congregation grew, it built a larger church and moved out in 1957 — taking the church steeple, too. Since that time the building had a variety of occupants, including a furniture store and a sewing supply center.

Kathy DeRose said one of the first things she did when the restoration began was to grab a hammer and knock a hole in a plaster wall. Hidden behind that wall was a brick wall, which now forms the backdrop for the inside of the venue. The couple added chandeliers, molding and window sashes that mimic the style of the past. They removed glued-down carpeting that had covered the original wood floor and water-washed the exterior to remove the white paint from the brick.

The couple were able to locate original doors from the church, restore windows and uncover stained glass arches that had been hidden from view.

"Our goal was to use the most original things that were here," said Kathy DeRose.

David DeRose said the variations in the wood floorboard show where there once was a fire in the church and where a pipe organ once sat. In the entryway visitors can look up and see where the steeple had once been. Upstairs in the former Sunday school classroom, there is a full-sized "bride's mirror" that the DeRoses purchased from a consignment shop. The small room can easily be envisioned as a space for a bride to get ready for her big day.

Mixed with the old at Brickhall at the Hollow are new bathrooms with framed historic pictures of the church with its impressive steeple. The venue also includes a restaurant-style kitchen.

David DeRose wouldn't provide specifics on the renovation costs but said they were "significant."

In the small building next to the church, the DeRoses also opened a farm store, where they sell eggs and beef from grass-fed cattle from the couple's nearby farm in Akron, Utley Acres, as well as fresh local baked goods and jams, honey and in-season vegetables provided by local farmers.

A house next-door to the farm store is also part of the property and the DeRoses are in the process of renovating the "yellow house" for rentals to out-of-town visitors.

Clarence Supervisor Patrick Casilio said the church renovation could act as a catalyst for more development in Clarence Hollow.

He said the farm store and the church were both in danger of being torn down before the DeRoses purchased the property.

"They are definitely trying to keep the historic feel," said Casilio, who called it a massive cleanup effort.

The DeRoses' son, David, and their daughter, plus her friend Kaylyn Zurawski, are also part-owners of Brickhall in the Hollow.

The venue can host banquets with seating for 105 guests or cocktail events with 220 guests. The DeRoses have partnered with Gertie's Restaurant of Clarence, owned by Beth Gross and Gary Held, which will be the venue's exclusive caterer.

So far, Brickhall in the Hollow has hosted a few Christmas parties, retirement events, receptions and luncheons.

Kathy DeRose said she'd like to see the community utilize the site for theater group performances or Clarence chamber events, too.

"Success would be that it becomes a vibrant part of the community again, like it was at one time," said David DeRose. 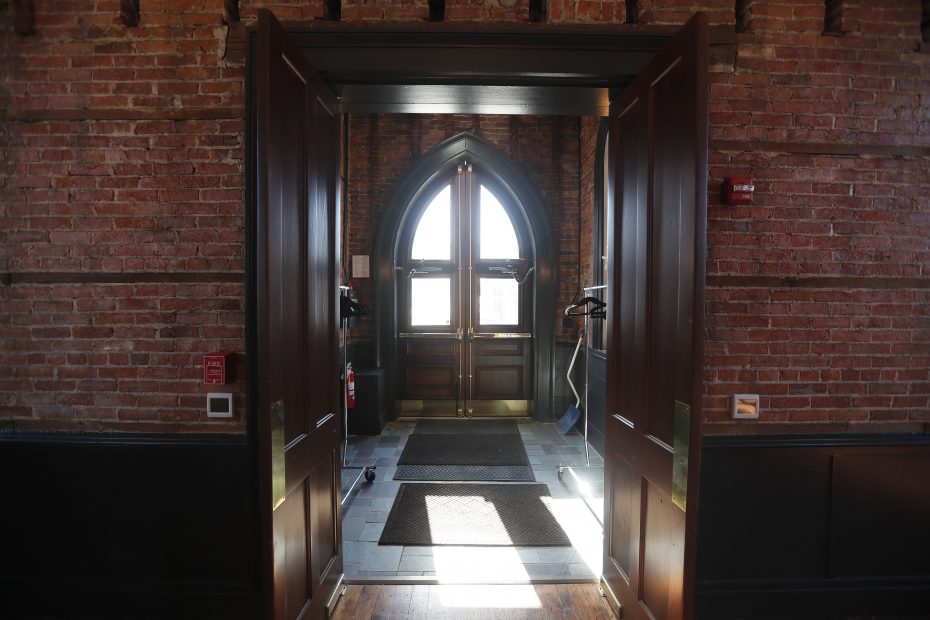 The front entrance of the Brickhall in the Hollow has doors that were original to the building, which was built in 1844 as the First Presbyterian Church in Clarence. (Mark Mulville/Buffalo News)