The federal government spent more than $50 million this decade removing lead, mercury, PCBs and other poisons from the depths and shoreline of the Buffalo River.

Then, Jill Jedlicka and volunteers from Buffalo Niagara Waterkeeper tore invasive plants from the banks of the river and planted native trees and shrubs in their place.

They built a nesting area for turtles, hidden habitat for bass and perch and a pollinator garden for bees.

Despite all that work, the Buffalo River remains one of the unhealthiest rivers in New York State.

Only the Lower Bronx River, East Hudson River, the Narrows between Staten Island and Brooklyn, and Flushing Creek ranked worse, according to a first-of-its-kind statewide analysis mapping the environmental health of 1,673 subwatersheds.

If that news sounds discouraging, it doesn't surprise those who have tirelessly labored over the last five years or more to restore the Buffalo River. They say the fight is a marathon, not a sprint.

"We're still in the midst of restoration," said Jedlicka, executive director of Buffalo Niagara Waterkeeper. "If that report comes out a couple years from now, we're telling a different story."

"It's easy to move mud and plant trees, but it's not easy for an ecosystem to be restored," Jedlicka said.

The new analysis found that the Buffalo River is the fifth unhealthiest river in New York State. Two Mile Creek in Tonawanda is 11th worst on the list.

The analysis was conducted by the Natural Heritage Program of the state Department of Environmental Conservation.

The researchers found few trees and shrubs growing along the river's shoreline. Natural habitat for wildlife is limited. And the  pavement-laden urban environment doesn't help.

Over the last few years, Waterkeeper has spearheaded habitat restoration aimed at addressing many of those problems.

That work included planting native shrubs and trees that stabilize the shoreline, increasing wildlife habitat and absorbing stormwater runoff at seven sites along the Buffalo River's more than 6-mile stretch between Bailey Avenue and Canalside.

"Even with all of the improvements at the Buffalo River, there's more work that needs to be done," said Jim Howe, executive director of the Nature Conservancy.

Waterkeeper's internationally acclaimed efforts followed a couple of years of intensive dredging of the Buffalo River channel and excavation of hazardous chemicals left behind in the river and along the shoreline from nearly a century of industry.

Those efforts jump-started development like Buffalo RiverWorks, Buffalo River Fest Park, the Tewksbury Lodge and private apartments along Ohio Street. Recreational boats and kayaks dot the river in Elevator Alley and around the newly built Mutual Riverfront Park. And new projects are in the works like the Western New York Land Conservancy's proposed "High Line" along the elevated DL&W rail corridor that runs near the river.

And even some of those associated with the DEC study acknowledged the imperiled Buffalo River might already be well on its way toward recovery because of work like Waterkeeper's.

Although the assessment is considered current, some of the data researchers relied on came from sources a few years old, said Erin White, a zoologist with the state's Natural Heritage Program.

"The Buffalo River could be in better shape than is indicated," White said. "That is possible."

The assessment determined that many of the state's nearly 1,700 subwatersheds are unhealthy and over-stressed.

A new mapping tool is available to help environmental advocates, watershed conservation groups and public leaders target sub-watersheds that need the most environmental restoration. Click on the image to be taken to the site. (New York Department of Environmental Conservation's Natural Heritage Program)

The analysis was part of a broader assessment by the state that uses a dozen or so metrics to assess and map the relative ecological health and stress on the state's subwatersheds and even smaller catchments contained within them.

To score a tributary's health, researchers looked at wildlife habitat, floodplains, connectivity, tree cover, aquatic life and other metrics. Stress scores were measured based on an erosion index, impervious surfaces, water quality issues and the condition of the surrounding landscape.

It allows them to take a "science-based" approach in their decision-making process.

"It offers a lot of information in one place to better identify restoration locations and prioritize restoration efforts," White said.

For instance, the data show the Buffalo River scored low for canopy cover and native plantings along its banks and high for environmental stressors like impervious surfaces, landscape use and impaired water quality.

Two Mile Creek in the Town of Tonawanda scored low for many of the same metrics.

"It is not surprising for city watersheds to score highly in ecological stressors relating to development and paved areas," White said.

Even with the stresses, researchers found that aquatic life — fish and macroinvertebrates — are overcoming environmental challenges in both the Buffalo River and Two Mile Creek.

The DEC's Natural Heritage Program plans to use its new data to improve how it targets its $500,000 annual funding for the state's Trees for Tributaries program. 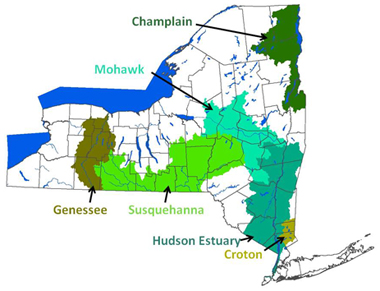 The state's Trees for Tributaries program hasn't made it to Western New York yet in its first 10 years, but state officials expect that to change in 2018. (New York State Department of Environmental Conservation)

"Trees for Tribs" is a decade-old DEC-sponsored program that offers free native trees and shrubs to volunteer partners for planting along creek and stream banks to boost their ecological health.

It has been used as far west as the Genesee Valley.

For the first time in 2018, DEC officials expect it will expand into Western New York.

Exact locations remain under consideration, but based on the newly crunched metrics, the Buffalo River and Two Mile Creek could be prime candidates.

The analysis showed Cattaraugus Creek is a haven for aquatic life, like certain fish species.

And, as a major tributary in eastern Lake Erie, the creek is also the subject of the DEC-sponsored Lake Erie Work Group's ongoing focus for environmental rehabilitation.

Why Cattaraugus Creek needs TLC to head off looming problems

What's more: The data showed a dozen of the 30 most stressed subwatersheds in New York because of erosion are in the Buffalo Niagara region.

That matters to the health of the creeks and streams, and ultimately, to the rivers and lakes they flow into like the Niagara River, Lake Erie and Lake Ontario.

"The condition of shoreline areas is directly linked to water quality and aquatic habitat in our local waterways," said Joseph Gould, director of ecological programs at Buffalo Niagara Waterkeeper. "Healthy shorelines are ones that have minimal erosion and provide ecological services like filtering stormwater runoff."

Ellicott Creek was one of the hot spots targeted by Waterkeeper last year for shoreline restoration.

"It gives us a lot of different ways to slice how to address riparian restoration work in New York," said Howe from the Nature Conservancy. "This is a big water quality program."

The DEC's program provides trees and shrubs for planting along creek and stream banks to help anchor the soil, improve water quality and provide wildlife habitat.

The Nature Conservancy lent its research into stream connectivity and climate resilience to the bank of data used in the broader project.

Howe said land use in the riparian area – which is the land between 2 and 200 feet from streams – is critical to ecological health.

"They're representing a last line of defense in where the water meets the land," Howe said.