TAMPA, Fla. — Auston Matthews was asked Sunday night if his pointing "good-goal" celebration has a name. He thought about it quickly and came up with The Referee.

It was hilarious and put another spotlight on how guys barely old enough to have a beer, at least on our side of the border, are having a huge impact on the NHL as the stars of the last 10 years start to age.

A quick refresher: Matthews had a goal wiped out in ridiculous fashion in the Toronto Maple Leafs' loss to Colorado on Monday, as it was ruled he had interfered with Avalanche goalie Jonathan Bernier while poking a loose puck home in the crease like hockey players have done for, oh, decades.

A few seconds later, Matthews scored again and emphatically pointed at the net to mimic referee Gord Dwyer standing next to him.

Auston Matthews scores again to make it 2-1 again and saves the refs the trouble, ruling it a good goal himself. pic.twitter.com/FbOFPAEUly

Fast forward to Sunday. In the Atlantic-Metropolitan semifinal, Eichel fed Ottawa's Erik Karlsson with a sick one-touch pass for a goal to give his team a 5-4 lead with 4:32 left – only to see it challenged for offside by Washington coach/All-Star party pooper Barry Trotz. And lo and behold, Tampa Bay's Nikita Kucherov was offside going in the bench door just as the puck crossed the blue line.

Karlsson was pointing for a good goal during the review as The Beatles' classic "Let It Be" played at Amalie Arena. When showboating referee Wes McCauley offered an emphatic no-goal call, Karlsson tossed his gloves in the air in indignation – while Eichel and Matthews had a chat.

Just 62 seconds later, Eichel scored the go-ahead goal for real in what turned into a 7-4 Atlantic victory and immediately pointed at the net, Matthews-style. Matthews curled around from behind the net and offered two strong points of his own. Another classic pose.

"Me and Auston talked about it at the faceoff previous and he was like, 'Hey, if we score here let's both point at the net' so we kind of had it planned already," Eichel said. "He said, 'We better score this shift so we can do it.' "

Eichel and Matthews are friends who played together in USA Hockey events, including the National Development Team and the 2015 World Junior Championship. On this night, they were a standup act. But Matthews said don't look for The Referee to become a trend.

"Probably not. A one time thing," Matthews said. "It's the All-Star game. Pretty light. Obviously there's been a lot of talk about the goalie interference calls. Just keeping it light out there."

"That was actually talked about on the bench," said Atlantic/Tampa Bay coach Jon Cooper. "Those two were cracking themselves up. That was a little USA Hockey we were thinking throwing those two guys together. I would have actually liked to have sat between the two of them because they were funny."

The Sabres were in Calgary Monday when Matthews had his moment. Eichel said he saw the video after he scored the overtime winning goal at the Saddledome but didn't immediately know the context of Matthews' disallowed goal.

"After I watched it, I'm not really surprised knowing Auston," Eichel said. "He probably thought about that right after it happened."

"I was just excited to see those two pass the puck and make the plays they made out there," Atlantic/Tampa Bay captain Steven Stamkos said. "That's what this event is all about. Showcase the skill and you have some fun. This whole weekend showed different sides of players' personalities."

Eichel had a goal and two assists in the game, tying for team-high honors and continuing his hot play of the last six weeks in his All-Star debut. He did not score as Atlantic lost the final to Pacific, 5-2. At age 21, Eichel was one of 15 first-time players in the game and they included big names like MVP and Vancouver rookie Brock Boeser, Tampa Bay goalie and Vezina Trophy frontrunner Andrei Vasilevskiy, NHL defenseman scoring leader John Klingberg of Dallas and Winnipeg goalie Connor Hellebuyck.

And that's in a game that also included Matthews (20), Connor McDavid (21), Nathan MacKinnon (22), Nikita Kucherov (24) and Johnny Gaudreau (24) – all of whom have already been All-Stars. Don't look now but Alex Ovechkin is 32 years old, Sidney Crosby and Kris Letang are both 30 and the Chicago duo of Patrick Kane and Jonathan Toews is 29.

Stardom is slowly shifting in the NHL.

"Teams are getting an opportunity to expose their young players more," Eichel said. "It's good. It goes to show development at a younger age to put yourself in this position. We had four guys from the National Team Development program here. It just says a lot of the development of youth programs, junior programs. It's getting so much better that we're able to come in and make an impact at a younger age."

Prior to the game, that quartet – Matthews, Eichel and defensemen Zach Werenski (Columbus) and Noah Hanifin (Carolina) – posed for a picture. They're not going to be a core of an Olympic team in South Korea in a couple weeks. Maybe they join a 33-year-old Kane in Beijing in 2022. 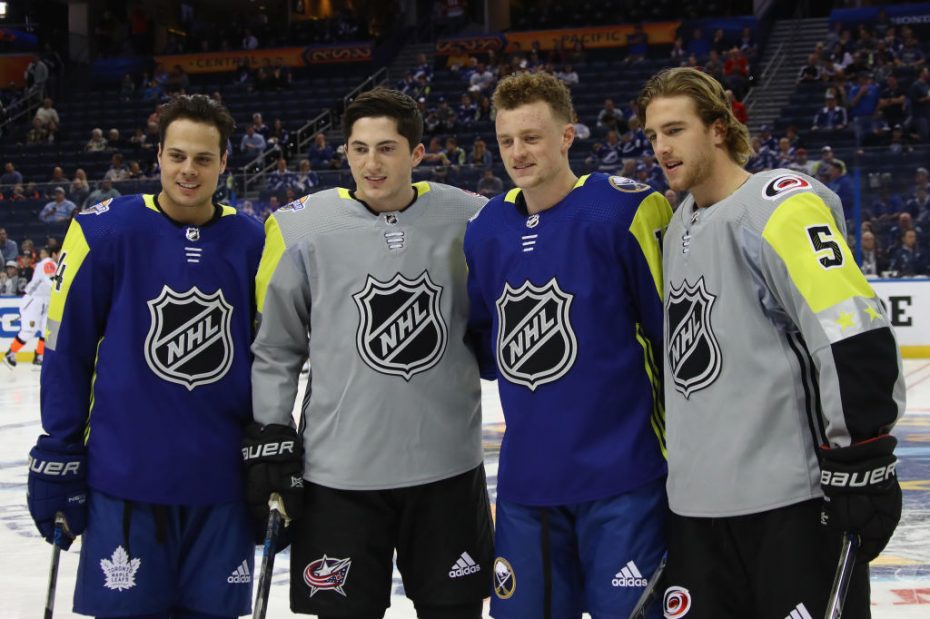 Eichel will add Sunday's game to his career highlight reel, notably when he traded ridiculous back passes to feed Tampa Bay's Kucherov for one goal.

"He's probably one of the most exciting players in our game right now and a guy I actually study a lot," Eichel said. "It was pretty cool to be out there with him. In moments like that, you're trying to make the extra pass and put on a show for the fans."

When @86Kucherov is scoring, the Tampa fans are happy. #NHLAllStar pic.twitter.com/eLFeCtfLwi

Eichel even had to defend Crosby and Ovechkin on a 2-on-1 break. He got the job done.

Stamkos loved the showmanship of Eichel and Matthews – and the way they actually played the game.

"We've seen a trend the last 5-10 years of guys coming in and just being absolute stars right away," Stamkos said. "That goes to show not only the skill set but the maturity of these guys. It was a lot of fun to watch. I caught myself mesmerized by some of the plays they were making out there."