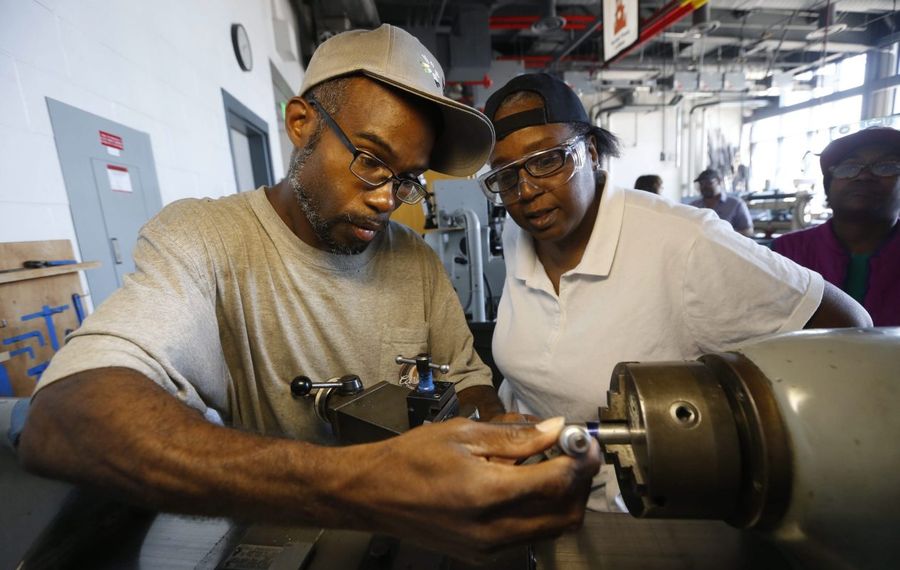 Manufacturers in the Buffalo Niagara region are facing a labor shortage. But they’re not just wringing their hands about it.

As many of their older, experienced manufacturing workers head toward retirement, manufacturers say they don’t see enough younger people coming along with the right skills to take their place. They call it the “gray tsunami,” and say if the problem persists, it could undercut companies’ growth potential.

The manufacturing sector in the region is smaller than decades ago, but it remains vital. The Buffalo Niagara region averaged 52,000 manufacturing jobs last year, down 39 percent from 25 years ago. But the total has stabilized over the past four years.

A variety of efforts are underway to increase the region’s pool of skilled trades workers, in manufacturing as well as in sectors such as construction.

Here are some examples:

The United Way of Buffalo and Erie County in 2015 received a $3 million grant, aimed at funding 300 apprenticeships in advanced manufacturing over a five-year period through September 2020.

Fifteen employers in five counties are participating, and an additional three are expected to join this year, said Holly Hutchinson, project director of the initiative at the United Way. The program is nearing its maximum capacity of workers to train under the grant.

The participants range in size. S&H Machine, a small business in Buffalo, is training a computer numerical control machinist, while Ford Motor Co.’s stamping plant in Woodlawn has 18 apprentices, in the roles of electrician, millwright, industrial truck mechanic, machine repairer, pipefitter and welder.

“Apprenticeship works at all these different levels,” Hutchinson said.

At Ford, two millwrights and one machine repairer in the program are women. Local manufacturing advocates want to diversify the workforce of area plants by attracting more women and minorities to those careers.

Area colleges and universities are trying to fill the gap in different ways, through academic courses or programs geared specifically to the needs of employers.

SUNY Buffalo State a few years ago launched an Advanced Manufacturing Training Program. Erie Community College has a corporate training department, which focuses on meeting employers’ training needs and is a complement to the academic program.

Corporate training instructors help workers improve their skills and keep up with new developments in technology, said John Slisz, ECC’s director of professional development and workforce training. Companies in a range of sizes come calling for those services.

“I do feel we’re making a difference,” he said. “The problem is so big, though, it’s not anything Erie Community College can tackle on its own. ... I wish we had more capacity to help more companies. There’s only so much we can do. But I do feel like the companies that are working with us are better for it. They’re more productive, more efficient.”

Manufacturers are eager to connect with students before they rule out manufacturing as a career option. Their message: manufacturing has high-paying, high-skilled jobs to offer, in modern workplaces.

It ties into a bigger-picture push to encourage people to pursue STEM (science, technology, engineering and mathematics) careers. Organizations like Western New York STEM Hub are putting a spotlight on those opportunities.

Students have toured places like General Motors’ Tonawanda plant to see the intricate work that goes into building an engine. Buffalo Manufacturing Works has a classroom filled with 3-D printers, where students put the technology to work. The “Dream It, Do It” program, launched by the Manufacturing Institute, aims to change perceptions about manufacturing careers.

All those efforts are in addition to training some students receive at the high school level. To hear manufacturers tell it, far more schools should be offering that kind of preparation.

A former manufacturing complex on the East Side is coming back to life as a training hub. Renovations of the Northland Corridor complex are underway, with the goal of having its office space ready by the end of July and classrooms ready for use by September, said Stephen Tucker, the president and CEO. The center has started holding meetings to drum up interest among potential applicants.

The center, which is a Buffalo Billion project, is an ambitious effort to train low-income and disadvantaged residents. Its partners include the Buffalo Niagara Manufacturing Alliance. Buffalo Manufacturing Works, which provides resources to area manufacturers, plans to move there from Main Street.

Unions are a key source of developing more skilled trades workers, through apprenticeships. The state Department of Labor lists more than a dozen unions in Western New York accepting applications for apprentices. Some apprenticeships take several years to complete, but set up those workers for careers in good-paying jobs.

The skilled-trades shortage extends beyond manufacturing into the construction industry. A Pre-Apprenticeship Training Program was included in a project labor agreement covering work at the Northland Corridor project, which includes the workforce development center. The eight-week program aims to attract more residents from low-income and minority neighborhoods to the trades.

Paul Brown, president of the Buffalo Building and Construction Trades Council, said the pre-apprenticeship program gives young people a feel for careers in the trades, to see if they want to follow through and become apprentices.

“We just want these guys to show an interest in construction, and show up on time,” Brown said. “Showing up on time is half the battle.”

Manufacturers often say they have job openings but can’t find people with the right skills to fill them. An employer-led effort that includes the Buffalo Niagara Partnership is trying to bridge the gap by connecting employers with diverse, qualified candidates. Companies including SoPark in Lackawanna are bringing an employer’s perspective to the effort.

Employ Buffalo Niagara is working with employers to find out what specifically is required for their job openings, and then working through an agency such as the United Way to identify good prospects for the positions, said Laura Smith, vice president of economic development for the Partnership.

Manufacturers are still battling against the old perception of a dying sector with dirty workplaces, she said. “There’s an awareness that we have to help with in our community.”

Employ Buffalo Niagara is also trying to identify impediments to someone keeping a job even if they get one – reliable transportation to the worksite, for instance – and helping to remove those barriers, she said.