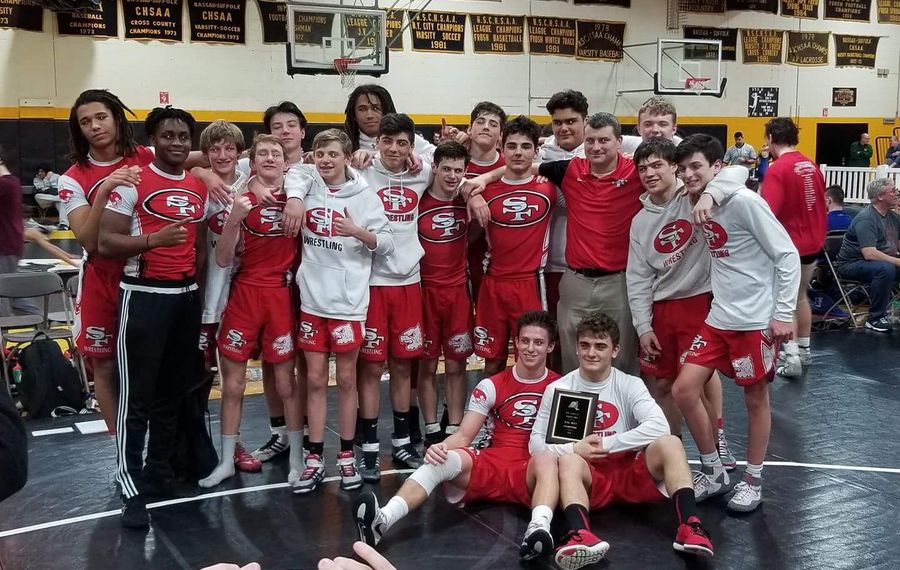 The St. Francis wrestling team is heading back from Long Island with some championship hardware.

The only other year a Monsignor Martin school won the duals title was in 2015, also by St. Francis.

St. Francis lost its first match of the two-day event to Monsignor Farrell, 45-33, before winning its final four on Saturday.

On Sunday, the team bounced back from a flat start to win its final four matches.

St. Francis shot out to a 30-0 lead in the final match, but Chaminade closed the gap to 42-37. Senior captain Connor Miller sealed the title with a pin to bring the final score to 48-37.

St. Joe’s also competed at the tournament, going 4-1 on Saturday and 2-2 on Sunday.

Brett Sardina scored once in Williamsville North’s 6-1 boys hockey win over Bishop Timon-St. Jude to break the school record for goals in a season with 23. Andrew Bruno added a goal and two assists for the Spartans.

Elsewhere, Lew-Port’s Jacob Peters recorded a natural hat trick to lift the Lancers to a 4-3 win over Amherst.

Orchard Park’s Ryan Niles and Nathan Cox both scored twice in a 5-1 win against Lancaster.

Jimmy Grable and Ethan Louisos each had two goals in St. Joe’s 4-0 win against Clarence, while Dan Mikolajczak earned the shutout.

Frontier’s Nate Dolan and Brandon Holland had two goals a piece in a 4-2 nonleague win against Section III’s Mohawk Valley.