Since Justin Roehner was a boy, he had wanted to serve in the military.

As a teenager watching the war on terror unfold on the family's television in their Town of Tonawanda home, Roehner's resolve increased.

"The events of Sept. 11, 2001, were obviously a major driving force. I would see the war correspondents in Iraq and the night-vision footage of tracers and the weekly casualty reports. I knew that was where I had to be to do my part," Roehner said.

In his senior year at Kenmore East High School, he enlisted in the Marines with his parents' consent and by August 2009 he was in boot camp at Parris Island, S.C.

Assigned to the 2nd Battalion, 5th Marine Regiment, Echo Company at Camp Pendleton, Calif., he and his fellow Marines got their first taste of action in 2011, but not in a war zone. They were aboard the USS Harpers Ferry in the Pacific when a catastrophic earthquake and tsunami hit Japan, killing thousands and damaging nuclear power plants.

Roehner says he and other Marines worked in shifts around the clock loading helicopters with food, fresh water and other supplies bound for Japanese citizens.

"We had been briefed and had our gear ready to go ashore," he said.

To his disappointment, his unit remained at sea.

Hometown and residence: Town of Tonawanda

But a year later, Roehner was in the thick of it in Afghanistan.

"We were sent to Helmand Province, and that was a very active area that the Taliban was working in," he said.

He described the province as a patchwork of desert, speckled with poppy farms – which produced the raw material for heroin – and rolling hills with mountains in the distance.

"It was one of the few places where you could operate tanks," he said.

"We operated with the Afghan army and police to secure the area for citizens. We had major operations clearing the remaining Taliban strongholds. There were a lot of villages we cleared out and there was a lot of fire and improvised explosive devices," he said.

The Marines took several casualties throughout the deployment, he said, "but there was a significant number of Taliban fighters who were eliminated."

He described the firefights as intense. 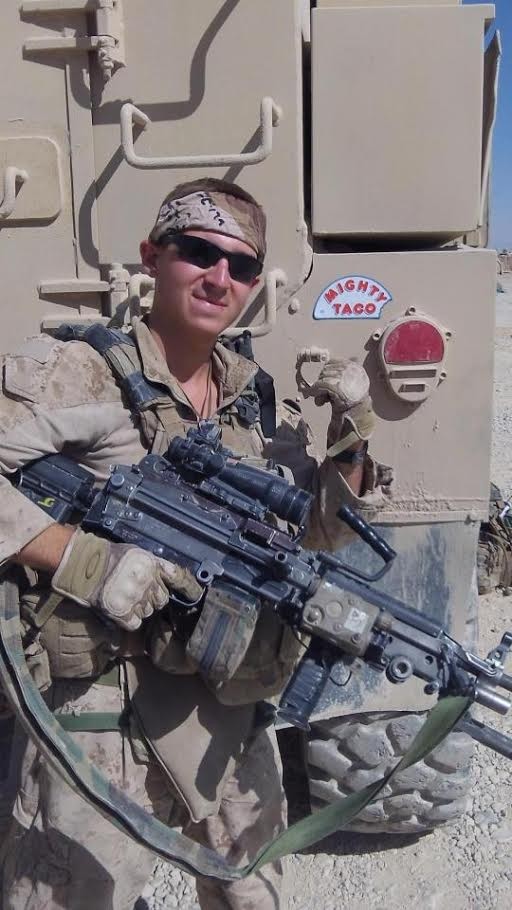 Marine veteran Justin Roehner had to clean his light machine gun frequently to make sure it would fire when needed during intense battles in Afghanistan’s hot, dusty climate. (Courtesy of Justin Roehner)

"It's an adrenalin rush you could never imagine. You never knew when you would get into the next firefight. So in between times, you'd clean your weapon, check your gear and then take care of yourself."

During encounters with Afghan citizens, he said the reception was mixed.

"Some did not want us there and others were grateful. There was a language barrier, but at the same time we were all human beings and sometimes we would eat with them," Roehner said.

What were his thoughts on the Taliban?

"We were there to do a job and their job was to kill us," he said, expressing gratitude that he returned home unscathed. "Not everybody did."

After the eight-month deployment, Roehner left the Marines the following year. He has since graduated with a bachelor's degree in psychology from D'Youville College and is now working on  a master's degree in clinical mental health counseling at Niagara University.

He also works part time at Horizon Health Services as a clinical care specialist. Married to the former Maryam Afzal, he says they plan to start a family in the future, but for now they baby their dog, a German shepherd.

"I named her Echo after my Marine company. It was important to me, it was a very significant part of my life," he said.

Roehner says he is grateful that he had the chance to fulfill his childhood dream of serving in the military and defending the nation.

"I'm definitely a better person for it and if I had to do it all over again, I would."