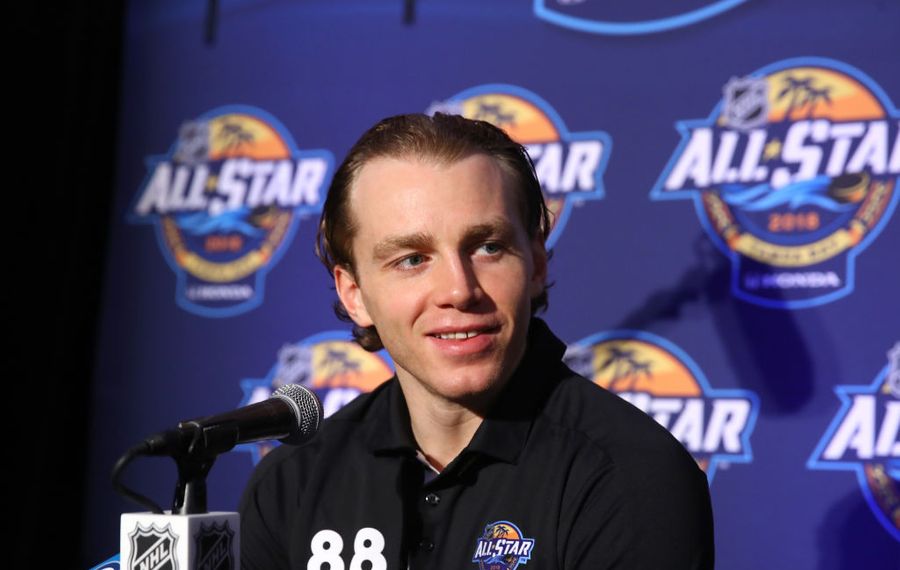 TAMPA, Fla. -- At just 29 years old, South Buffalo native Patrick Kane is at a career crossroads. No longer is he one of the young superstars of the NHL. Instead, he's a wily veteran still capable of producing big numbers but now also trying to help a new generation of Chicago Blackhawks become stars in their own right.

How stark is it to realize this is Kane's 11th season in the NHL? When he takes the ice Sunday in Amalie Arena, Kane and Washington's Alex Ovechkin will be playing in the All-Star Game for the seventh time.

In a year where 15 players are first-timers, no one has been here more.

"I have fun with it and I still feel like I’m a kid at heart too," Kane said while meeting reporters Saturday at the Tampa Grand Hyatt. "Still love playing the game."

It shows. Kane remains a point-a-game player with 20 goals, 29 assists and 49 points in 49 games -- exactly the same stats 21-year-old Sabres star Jack Eichel has rung up this year. Kane has career totals of 305 goals, 496 assists and 801 points, making him fifth in team annals for both goals and points.

He's won three Stanley Cups, a Conn Smythe Trophy, a Hart Trophy. And much of that notoriety comes from playing into May and June. But Kane's season might end prematurely, with the Blackhawks currently out of the playoffs for the first time since his rookie year in 2007-08.

The Hawks hit the break 23-19-7 for 53 points. They'd be in reasonable shape if they were in the Eastern Conference but are in deep trouble in the ultra-competitive Central Division -- where they are in last place even though they're sporting a .541 points percentage.

The Hawks are 10 points behind St. Louis in the race for third in the division and four points out of the final wild-card, which is currently a four-way tie between Colorado, Los Angeles, Minnesota and Anaheim.

"We had a big win the other night in Detroit and hopefully that gives us some momentum going forward," said Kane, who said he figures the Blackhawks need to win 23 of their final 33 games to make the playoffs. "I think it's very possible, that our team could do it and it will be a fun challenge going down the stretch.

"I don't think anyone is happy with what's gone on this year and where we're at right now, the position we're in. But let's do something about it and get ourselves out of it."

The Hawks are in the midst of an on-the-fly rebuild that's taking them from one of the league's older teams to one of its youngest.  Phenoms like 20-year-old scoring sensation Alex DeBrincat and Nick Schmaltz, Kane's 21-year-old center, have prominent roles. Three defenseman are 25 and under.

Kane, who makes his annual trip to Buffalo for a March 17 matinee in KeyBank Center, has taken to spending lots of extra time with the young players after practice.

"It seems like they're just finding ways to get better. I just figured if they're doing that, why can't I do that?" he said. "I think more than anything we're working on our game and different skills but more important we're having fun out there. A lot of laughs, a lot of chirping, lot of jokes, different things going around.

"It's just kind of a natural occurrence when you get older, have been in a lot of games and a lot of different things. Whatever I have to offer, can help with the younger guys, I will. The future is bright for the Blackhawks and some of these younger guys we have, they could really take off. The future is in good hands."