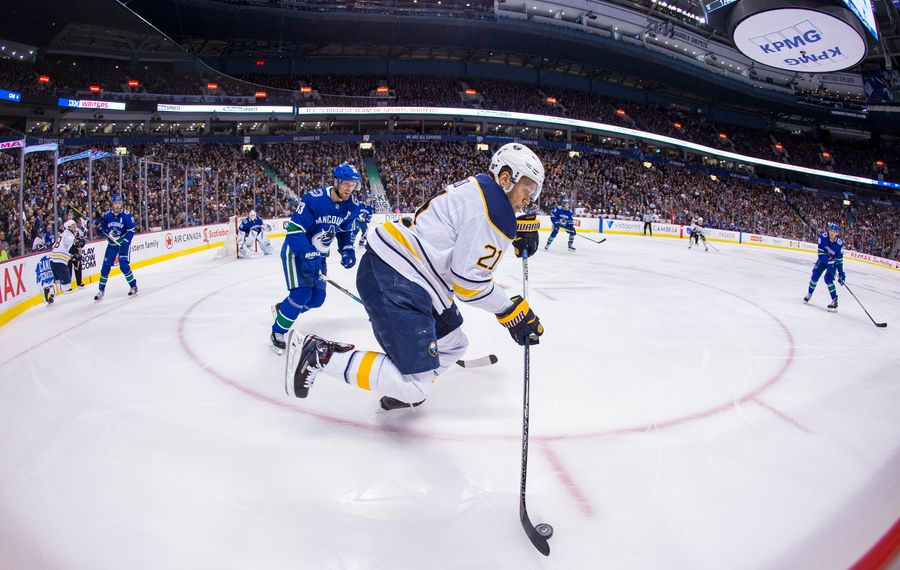 VANCOUVER – From the moment the puck dropped, the Buffalo Sabres made it clear they had no intention of losing. The first three-game winning streak in 11 months was in their grasp, and they wanted it.

Buffalo's unreal turnaround continued Thursday with a 4-0 victory over the Vancouver Canucks. Once again, the Sabres showed little resemblance to the team that started 11-26-9. After winning in Calgary and Edmonton, they made another statement in Rogers Arena that they're finally figuring out how to win.

Goaltender Robin Lehner earned his second consecutive shutout, stopping all 30 shots he faced. The only goal the Sabres allowed during the road trip was a power-play tally by the Flames.

Sabres' message after unreal road trip: 'This was no fluke'

Flying start: The Sabres couldn't have drawn up a better beginning. They took a 1-0 lead with 4:27 gone and piled up nine of the first 12 shots – and those numbers still don't do justice to their early dominance. They were skating, hitting and skating some more, setting up repeatedly in the Canucks' zone.

Staying hot: Buffalo opened its 1-0 lead with impressive work by Victor Antipin, Scott Wilson and goal-scorer Sam Reinhart. Antipin pinched from the point and controlled the puck behind the net. Wilson accepted a pass and skated alone to the front for a shot. Reinhart kicked the rebound from his skate to his stick and buried a backhand for his 10th goal of the year.

Reinhart has three goals and seven points in his last five games. Wilson extended his point streak to three games, which coincides with the left winger's move to a line with Reinhart and center Ryan O'Reilly.

"Through teams, it's tough to kind of establish yourself and find your game," said Wilson, who started the year in Pittsburgh but was traded to Detroit and then Buffalo. "The last few games I've been finding it with the help of those guys. It's fun to play with those guys, for sure."

Early lead: For just the 10th time this season – but for the second game in a row – the Sabres took a lead into the first intermission. Lehner made Reinhart's goal stand up by surviving the late pushback by the Canucks. Buffalo finished the first with a 1-0 lead and 12-9 shot edge.

Taking wing: The Sabres made one lineup move as forward Nick Baptiste played in place of Jordan Nolan. Baptiste skated as the right winger for center Evan Rodrigues and left wing Benoit Pouliot.

It paid off with a 2-0 lead. Rodrigues sent an outlet pass to Pouliot, who spotted Baptiste streaking through the middle of the ice. Baptiste broke in alone on goaltender Jacob Markstrom and made a nifty move to go five-hole with 7:11 left in the second period.

It was the first goal in six games this season for Baptiste, who has four goals in 20 career games. He scored his first NHL goal last season in Vancouver.

Keeping Canucks quiet: The Sabres took a 2-0 lead into the second intermission, the 13th time in their 49 games that they led after 40 minutes. Lehner had another nine-save period while keeping Vancouver scoreless.

Special teams: Antipin went to the penalty box for tripping with 7:26 to play, giving the Canucks a chance to make it 2-1. The penalty killers stood firm.

Shortly after the kill ended, the Sabres earned their own power play. They sent the fans streaming toward the exits. Marco Scandella's shot trickled past Markstrom toward the goal line, and Kyle Okposo pushed it over.

Okposo has four goals and 15 points in his last 15 games.

The Sabres' penalty killers made it 4-0 with 2:20 to play. Johan Larsson blocked a shot, then sent the puck the length of the ice into an empty net as Vancouver pulled the goalie for a six-on-four.

Getting close: Center Jacob Josefson, who missed his sixth game with a lower-body injury, is progressing and took part in the morning skate.

"We'll probably see him after the break," coach Phil Housley said. "He's just trying to find his timing right now, get back into shape. He's missed some time, but it's good to see him out skating."

Next: Following this weekend's All-Star break, the Sabres will settle in for a five-game homestand. The run of games against New Jersey, Florida, St. Louis, Anaheim and the New York Islanders kicks off Tuesday when the Devils visit KeyBank Center.