Nick Papagelis was a little kid about 30 years ago, when the ketchup ceremony really got started. Papagelis is from Rochester, and he began joining his dad for the drive to Buffalo Bills home games in Orchard Park. They often tailgated with Ken Johnson, another guy from Monroe County.

One thing led to another. By the mid-2000s, ketchup and mustard were spraying everywhere and pouring down Johnson's head and torso, a weekly fountain that became a kind of Roman spectacle.

"We give the crowd what it wants," said Papagelis, now a 32-year-old Paychex supervisor.

As onlookers gather, he does a booming, windup speech just before six or seven people, standing atop a van, let Johnson have it with ketchup and mustard and God knows what else, a great tide of condiments that leaves Johnson, a software engineer, coated with dripping sauce.

The ritual is a digital phenomenon, the recipient of thousands upon thousands of views on multiple YouTube videos. The founders have their own digital engine on Twitter, called @PintoTailgate, because, yes, a red Pinto is what Johnson – often called "Pinto Ron," after he was misidentified by that name in an article – still drives to the games.

Johnson, Papagelis and their buddies hoped they'd hold a few postseason ketchup ceremonies this year when the Bills finally made the playoffs, hopes brought to a swift end by the Jacksonville Jaguars. Yet the Red Pinto Tailgate crew finds itself using its ketchup celebrity for a mission of greater meaning.

Those hash tags were created in honor of the man they call Pancho Billa, a Texan whose not-so-secret identity is Ezra Castro. Born in El Paso, Castro embraced the Bills as his favorite team when he was a child. Despite living in Cowboys country, that allegiance only intensified. As an adult, his passion turned him into a stadium icon.

A mortician by trade, he goes to games in full regalia, wearing a Bills mask and sombrero emblazoned with team logo and colors. He's traveled the nation to cheer with frenzy for his Bills, a routine that often includes appearances at New Era Field.

In that fashion, he grew close with the mainstays of Red Pinto Tailgate, whose paths he crossed many times amid his travels. They happened to be together at a game last year when rumors started flying that the National Football League would hold its 2018 college draft in Dallas, rumors that turned out to be true.

Castro immediately did some dreaming out loud.

"When the NFL announced the draft would be in Dallas, my town, at that moment I knew not only did I have to be at it, but a part of it," Castro said.

His buddies from Western New York agreed. They remembered how everyday fans, selected for a wide variety of reasons, have occasionally had the chance to call a pick for a favorite team in the later rounds. To Johnson and his Red Pinto following, the next step seemed obvious.

In Dallas, why not Pancho Billa?

Why not this role model of a fan who doesn't drink or smoke, a family guy whose only excess is one that many of us share — a maniacal and often painful loyalty to these Buffalo Bills? Why not choose the president, the undisputed leader, of hundreds of loyalists in the Bills Backers group in Dallas and Fort Worth? 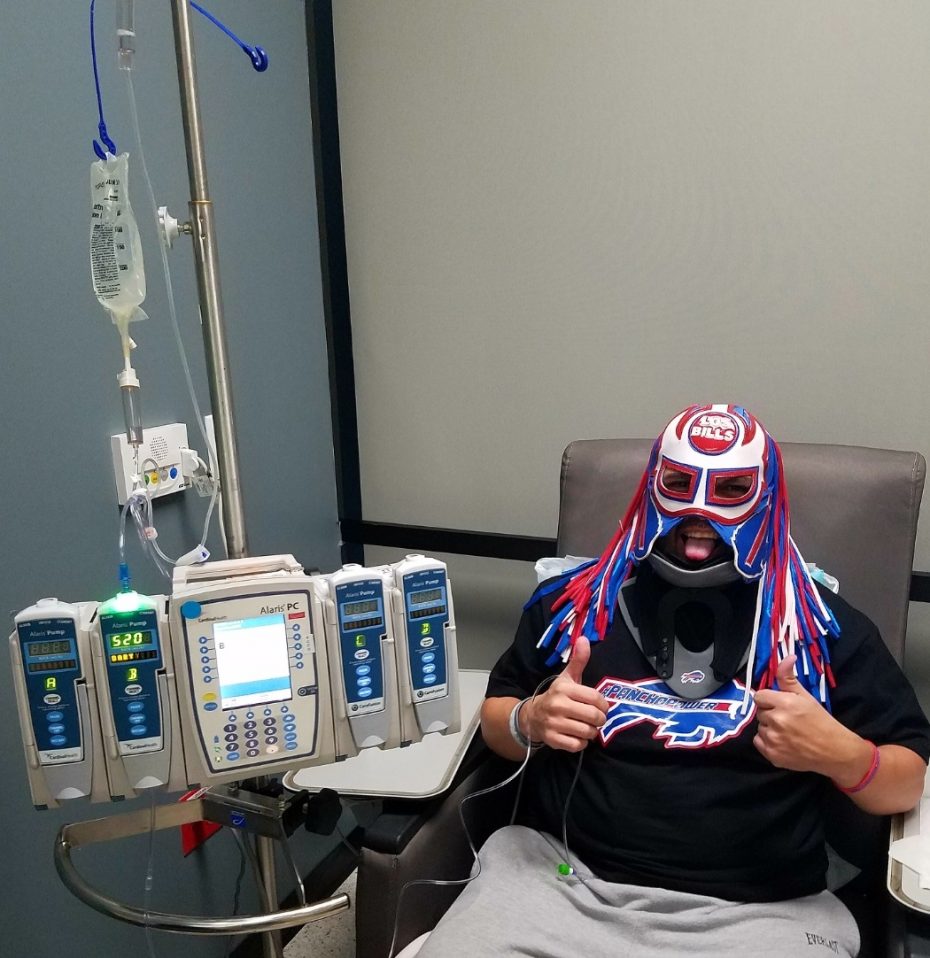 That idea was in motion even before Castro developed some numbness in his arm last November, before he stopped at the doctor's for a checkup on what he guessed was a pinched nerve.

He went through some tests. The results seemed impossible, against all logic. Castro, 38, had tumors in his liver, lungs and lymph nodes and a massive one, wrapped around his spine, that was removed surgically in December. A guy who'd hardly been sick for a day in his life was suddenly walking around with stage four cancer.

This week, he started chemotherapy. Once hooked up, he asked the staff to take a photograph. The image shows him in full Pancho gear as he goes through treatment. He'll continue with chemo for a few more weeks, then move on to radiation.

For Castro, the campaign for "Pancho's pick" is a welcome and uplifting distraction. What began three months ago as a whimsical dream is now a movement of far greater urgency.

"He's passionate and loyal and sweet and everything you'd want to see in a human being," said Buffalo native Katie O'Brien, president of the Houston Bills Backers and a friend who fully understands. Last year, on Super Bowl Sunday, she found a lump on her breast. O'Brien spent months enduring surgeries and treatment for breast cancer.

She loves the Bills, but she said Castro takes that faith to another level.

"He does charity work and he doesn't drink a lick of alcohol and he stops to spend time with every fan, every child, who comes up to him," O'Brien said. "All we want to do is give this man, this wonderful man, something to look forward to in this long struggle."

The Bills, as an organization, have noticed the campaign.

“We are always happy and proud of our fans coming together in times like this. They have a special bond with one another and we have seen many examples of the love and support they have for each other," said Derek Boyko, the team's vice president of communications, in a statement.

"Once we begin our draft preparations in a few weeks and work with the NFL through their logistics of fan involvement, we will definitely discuss it further. In the meantime, we wish Ezra and his family all of the best as they continue this fight,” Boyko said.

Castro, for his part, finds comfort in the national ripple of support. O'Brien started a GoFundMe account to help with his treatment, while the Red Pinto collective – led by Greg Kowalczyk, described by Papagelis as "a social media savant" — got rolling with a digital campaign.

The goal is having Castro call a pick for the Bills in his own town.

Hey everyone, our buddy Pancho Billa has a wish to one day announce a @buffalobills draft pick in his hometown of Dallas. Please help us as we do our part to help him fulfill his dream and get #PanchosPick to go viral. Thanks everyone and #GoBills!!! pic.twitter.com/F2w5N3tChU

One of the Red Pinto regulars, Tobin Izatt, created a new #PanchosPick video, and an informal coalition of Bills Backer groups from different cities are pushing it on Twitter.

Among those responding on Twitter was Eric Wood, the Bills center, who learned of Castro's cancer and urged the "Bills Mafia" to "rally around this Bills fan as only you can."

Wood announced Friday that a neck injury is ending his career. Only a few days past chemotherapy, Castro immediately tweeted back at Wood that "today, we rally around you and pray for you. Thank You! You're a genuine person. #BillsMafia will never forget you."

Cancer or not, Castro is indomitable. Wednesday night, he picked up the phone after he and his companion, Veronica Borjon, helped put their two young children, Ginobili and Lourdes, to bed. Castro said his only discomfort from the initial round of chemo was that it left him with hiccups that wouldn't go away.

He spoke with emotion of the campaign for the draft pick, and he choked up when recalling how Johnson – the guy famous for getting doused with ketchup and mustard – once explained  to him that all the effort on Castro's behalf isn't a burden, but a pleasure.

Sean Kirst is a columnist with The Buffalo News. Email him at skirst@buffnews.com, visit him on Twitter or read more of his work in this archive.