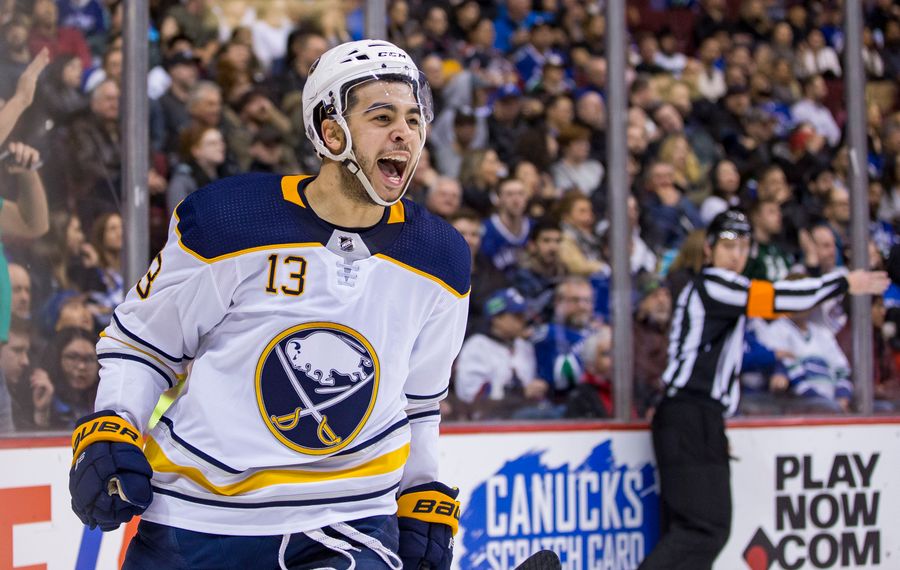 VANCOUVER – When the Buffalo Sabres flew to western Canada, there was nowhere to go but up. They'd just suffered a humiliating 7-1 defeat to Dallas that was further proof they deserved to be in last place.

"At that point," right wing Sam Reinhart said, "there's nothing you can say. There's nothing that anyone really knows what to do."

With no answers available, they put their heads down and went to work. It sounds so simple. In fact, it was what they'd been saying they needed to do all year.

It resulted in impressive wins over Calgary, Edmonton and Vancouver, the Sabres' first sweep of western Canada in two decades.

"This was no fluke," goaltender Robin Lehner said Thursday after beating Vancouver, 4-0, for his second straight shutout.

The Sabres were impressive in all facets during the memorable trip:

*Lehner and fellow netminder Chad Johnson stopped all 80 even-strength shots they faced, allowing only one power-play goal in the 2-1 overtime victory in Calgary. The overall shutout streak of 173 minutes, 30 seconds is second in franchise history to the 226:24 that Ryan Miller put up in January 2003.

*By playing as five-man defensive units who took care of the puck, the breakaways and odd-man rushes disappeared for the opponents.

"It made me and Johnny's life a lot easier this road trip," Lehner said.

*Led by a hot power play, the offense rolled up nine goals in two games, including the 5-0 win in Edmonton. The big names produced and the secondary scoring showed up.

"You can just go down the line of guys who have been playing great these last couple games," Baptiste said. "If we do that consistently and bring that effort and bring that tenacity to work hard, we're going to be successful."

It wouldn't have been a surprise to see the Sabres stumble in Vancouver. That's been their standard operating procedure whenever something good happens.

"We almost get a little complacent," defenseman Justin Falk said. "We accept taking one step forward and end up taking two steps back."

They had no plans to step back in the finale. They dominated the opening 10 minutes, then refused to crack when the Canucks started to push back.

"There's just a different feel," Falk said. "It's just the intensity and how hard guys are working. When you have that work ethic and that intensity and that assertiveness, everything else falls into place. It's just kind of been the issue here to get everyone to work as they can and bring it to another level."

It's noteworthy how much of a team game the Sabres played. Shift after shift, line after line, they hopped over the boards and did the right things.

"The guys have really bought in to how we want to play," coach Phil Housley said, "and you can see the results when they execute and their attention to detail is strong."

The three-game winning streak, which was Buffalo's first in 11 months, moved the team to 14-26-9. It's too late to make a playoff run, but it's never too late to establish a winning foundation.

"We've got to start building something here for the rest of the season, start getting our identity and our culture together," Lehner said. "It's very important for us."

The next challenge for the Sabres is keeping the momentum through the All-Star break. They split up following the win over the Canucks, and they don't play again until hosting New Jersey on Tuesday.

"It would have been a tough one to swallow taking a step back going into the break," Reinhart said. "All we can do right now is regroup, refocus and get our rest for another good stretch hopefully coming after the break."

If they do have another good stretch, the fans in Buffalo will get to see it. The next five games are in KeyBank Center.

"Now it's time for us to go home and play really well in front of our fans and reward them," Housley said. "I can see that we've made some really good steps on this road trip, and we've got to take it home."