When he grows up, Jaxsyn Nydahl can drive by the new Oishei Children's Hospital and boast that he was the first baby born there.

But he'll have to add that it surely wasn't an easy affair.

His hospital stay began shortly after his birth – at 12:10 p.m. Nov. 10, amid the frenetic activity as Women & Children's Hospital on Bryant Street moved into the new facility on the Buffalo Niagara Medical Campus in a complex operation planned with precision.

Being first makes someone a celebrity in the hospital, and Jessica Nydahl, his mother, is trying to take all the attention the family has received in stride.

"It has been mind-blowing to me. I was a random C-section who arrived in an ambulance," she said Friday with a laugh, cradling Jaxsyn in her arms. "I'm sure there were other pregnant women here who were pushing at the time."

Nydahl is familiar with problematic pregnancies and births. She experienced preeclampsia in her previous two pregnancies, a complication characterized by high blood pressure and signs of liver or kidney damage. The births were premature – first twins 11 years ago, James and Lily, and then a boy, Jayden, now 4. Lily died a year after her birth.

"With my daughter, everything that could go wrong with a preemie went wrong," said Nydahl, who cleans houses for a housecleaning service.

Her pregnancy with Jaxsyn – whose name incorporates a letter Y, in memory of Lily – was going well. Or so it seemed. But looking back, Nydahl sees that flu-like symptoms and headache she suffered the week before his birth were signs of potential trouble.

On the day she delivered, she was getting ready in her Niagara Falls home for a routine medical appointment that afternoon with Dr. Stephen Mechtler, her Amherst obstretrician-gynecologist. 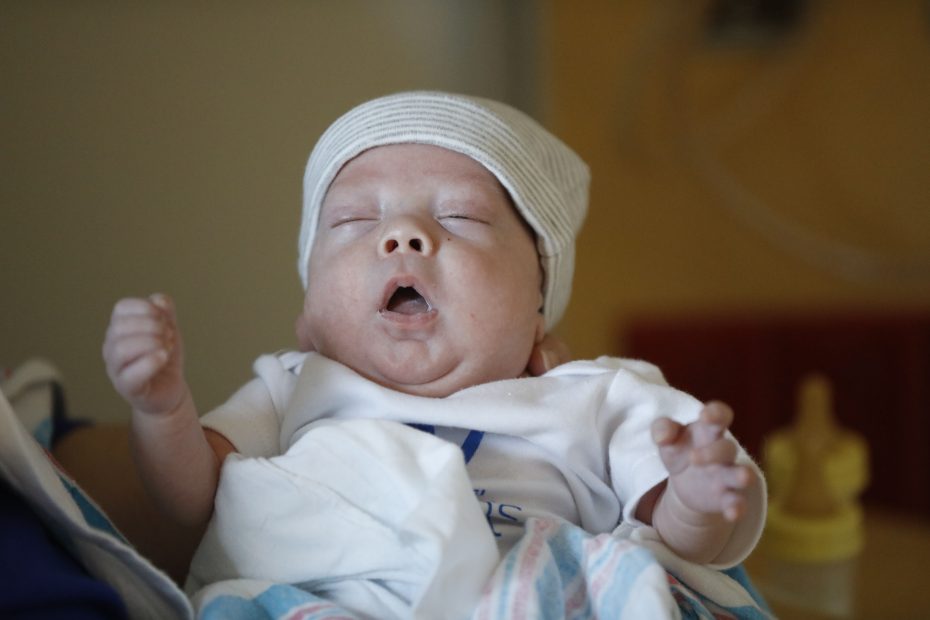 Jaxsyn Everts will return home with his parents after an extended stay at the new Oishei Children's Hospital. He was the first baby born at the new facility. (Derek Gee/Buffalo News)

It was a hectic time for her and Jaxsyn's dad, Christopher Everts, because they were packing in preparation to move to a new home Dec. 4.

Everts, who works in a factory that makes fuel cells for power plants, walked into the house that morning and found Jessica on the bedroom bed having a seizure, foam dribbling from her mouth. This was eclampsia, a severe complication of preeclampsia, a condition during pregnancy in which a woman has high blood pressure that can lead to convulsions.

"Most women recover from eclampsia," said Dr. Virginia Bond, an ob-gyn at Oishei with OB-GYN Associates of Western New York. "But, depending on severity, it can be life-threatening or have neurological consequences."

For Everts, it was a frightening experience. He hurriedly called his dad for advice and then dialed 911. Within a few minutes, emergency medical services personnel were at the door.

"The pregnancy didn't really sink in until I saw that ambulance leave the driveway," Everts said. "Oh my gosh, I said to myself. This is really going to happen."

He drove to Oishei. As he walked to the hospital, he phoned Mechtler to tell him what happened. Mechtler drove so quickly that he arrived on the third floor where Nydahl was only seconds after Everts walked out of the elevator.

"He just blew me away at how fast he got there," said Everts.

Jaxsyn was born via Caesarean section. Whenever a baby is born at Oishei, a song is played to announce it, and as soon as Everts heard the song in the waiting area he could barely contain himself.

"I went up to the nurses and told them they had to tell me if that was my child. I was just stressing out about it," he said.

Jaxsyn was small and needed assistance breathing. Otherwise, he was in reasonably good health and his prognosis is good.

Everts, like many new parents, chokes up when he talks about the first time he saw his son. "I lost it. I just started crying," he said.

Nydahl marvels at how much Jaxsyn has grown. He now weighs almost 8 pounds.

"After he was born, he was so small he just disappeared inside a onesie. It was like slipping him into a pillowcase," she said.

The parents are looking forward to getting Jaxsyn home. The experience has been an emotional and physical whirlwind.

They're filled with gratitude.

Nydahl said her employer has been accommodating with her work schedule. They also feel incredibly thankful to their doctor and the nurses who cared for them, especially in the neonatal intensive care unit.

"The people in the NICU deserve a lot of credit," Nydahl said. "There are so many babies who would not go home without them."