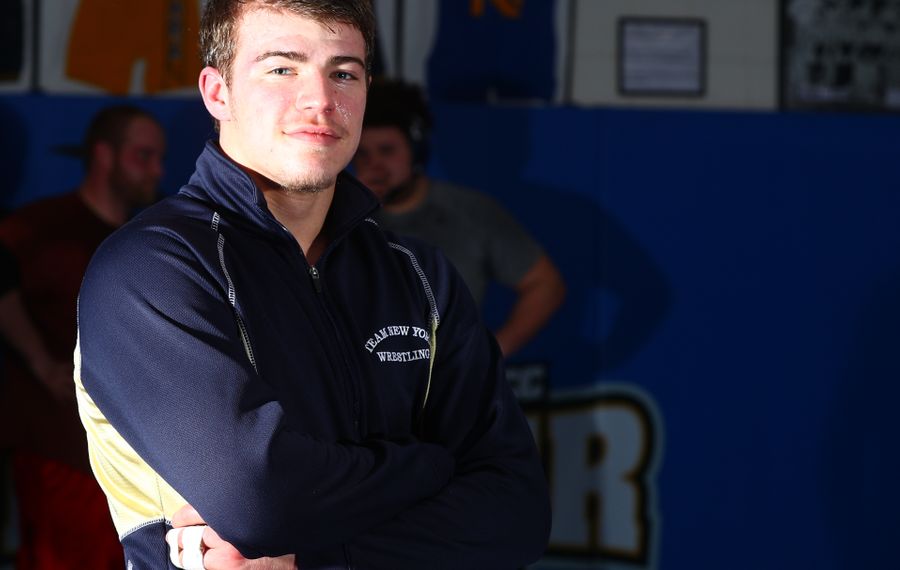 In the summer, Troy Keller is busting his back pouring concrete. By the fall, he’s sitting comfortably in a tree stand deer hunting. But in the winter, it’s all wrestling all the time –  and he’s made quite a name for himself doing it.

When the University at Buffalo-bound Keller walks off the mat for the final time wearing a Thunderwolves singlet, he’ll likely go down as the most decorated grappler to ever wrestle at Niagara County Community College. His name is already attached to more than a dozen school records, and some national title hardware could be in his trophy case soon enough.

After an All-American season as a freshman, Keller is picking up right where he left off in his sophomore year. The North Tonawanda native is 31-3 and unbeaten against JUCO opponents. He’s earned wins against competition from the Division I, II and III college ranks.

Besides a rough tournament at Case Western Reserve University, where Keller suffered all three of his losses, the only thing that has slowed him down – albeit briefly – was a broken nose he suffered in Oneonta. It was the first time he’s ever had a bloody nose, quite incredible if you consider he’s wrestled in hundreds of matches since he was 4 years old.

Since getting a knee to the schnoz, “Everything’s been good. I just gotta wear a stupid mask now,” Keller said.

“Good” is an understatement. Keller has been phenomenal.

Following a freshman season where he took fifth-place at the National Junior College Athletic Association National Championships in Iowa, Keller has been a revenge tour of sorts. He had an opportunity to sign with UB after last season, but coming up short at nationals left a bad taste in his mouth.

“I felt like I didn’t conquer junior college,” Keller said. “If I would have won a national title, I would have gone to UB. That didn’t happen so I gotta finish my business here before making that jump.” 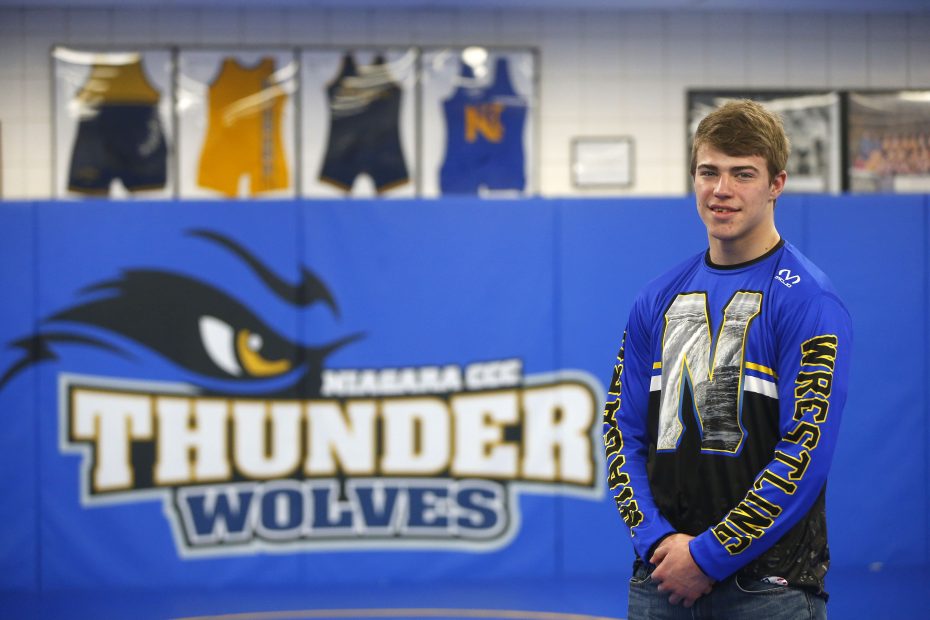 Troy Keller, pictured in March 2017, will leave a legacy on the walls of the NCCC wrestling room. (Mark Mulville/Buffalo News)

Keller's decision to come back has allowed him to start rewriting the record books in his second chapter at NCCC. He now owns the school record for career match points, team points, two-point near falls, four-point near falls and most notably, technical falls (wins by 15 points or more).

Keller’s reputation has been built on technical falls. He doesn’t just seem to win, he’s winning in convincing fashion almost each and every match.

“He’s best in the top position," NCCC wrestling coach Keith Maute said. "He’s really good at turning people and that’s why he tech falls so many kids. He has a series of tilts that he likes to do that he’s incredibly good at. That allows him to put up a lot of points really fast.

Once Keller gets the 15-point lead, a mercy rule of sorts, the match is over.

While some wrestlers show off their dominance by pinning opponents in short order, tech fall wrestlers are usually expected to use a little more clock. That’s not always the case with Keller. He’s tech falled two opponents this season in less than a minute.

“I’ve never seen anyone do that in college wrestling,” Maute said.

If Keller, currently at 76 wins, keeps up the pace he’s on, he’ll also eclipse Shive’s school record of 88 wins, too.

Etching his name in history is nothing new for Keller. Before NCCC, Keller had a prolific six-year career at North Tonawanda High School. His school-record 206 wins ranks 24th on the Section VI all-time list. As a senior, he won the Section VI large schools title at 145 and was named the Most Outstanding Wrestler at the meet.

He was the state runner-up, with his only loss coming to Penfield’s Frankie Gissendanner, who is a three-time state champ who is being coveted by the top Division I programs in the country.

Even with a sparkling high school resume, Keller was under-recruited. The only college interest came from Division III and junior college programs.

With his options limited, Keller found the perfect fit at NCCC. A spot for him to stay local, figure out a career path and wrestle for Maute, who he had built a relationship with through the Cobra Wrestling Academy. 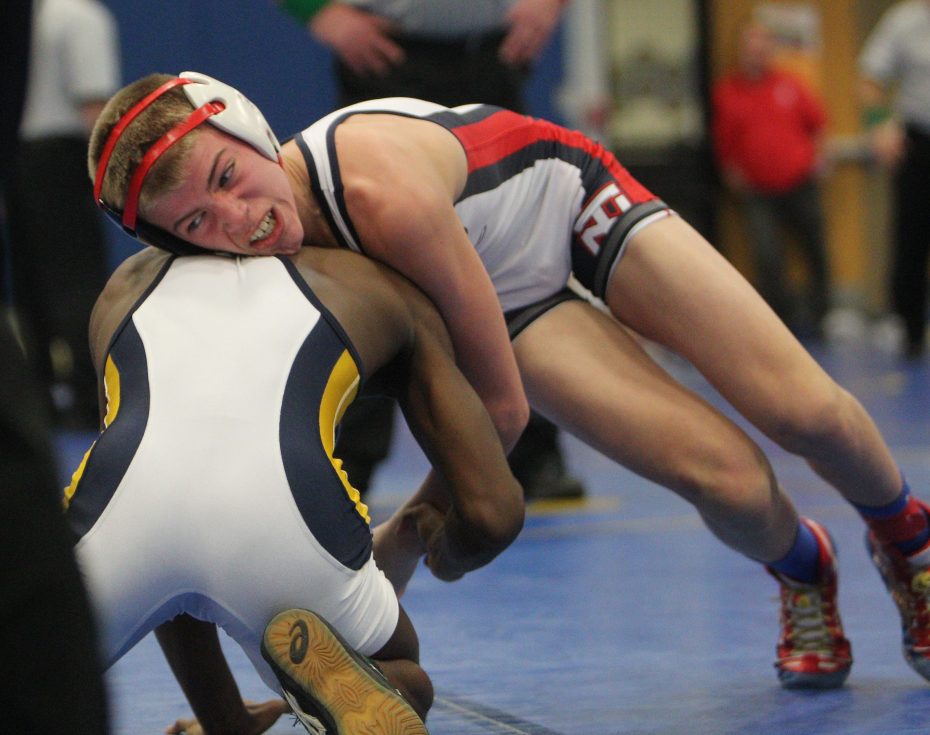 Since making coming to NCCC, Maute he’s watched Keller blossom into one of the best wrestlers in the country.

“In high school, he was just so much better than everyone around him,” Maute said. “He wasn’t pushed to the brink every day. When he came to college, he became surrounded by a lot of kids with a lot of talent. You start to see that development when you’re around that environment for five or six days a week.”

A big part of Keller maturation at NCCC has been his willingness to bulk up his frame. He went from wrestling at 145 in high school, to being able to jump up as high as 184 in college.

“I knew that I was still growing, I just didn’t know how big I was going to get,” Keller said.

Once Keller established himself and the wins started stacking up last year, he caught the attention of UB. He signed his letter of intent with the Bulls this fall.

“I’m really excited about it – I’m ready to finally wrestle D-I,” Keller said. “It’s going to be fun to wrestle against that type of competition and I have that test. Plus, I get to stay at home so that’s nice, too.”

Keller is the first NCCC wrestler to make the jump to a Division I program in Maute's seven-year tenure at NCCC.

“For Troy, he just wants it more," Maute said. "There’s a difference between someone who hates losing and someone who actually has a strong desire and will to win. No matter what we are doing, whether it be sprints, push-ups or wrestling, he has to win in everything. That's what makes him who he is."

And right now, there's nothing he wants to win more than a national title. He’s ranked No. 3 in the country in the 165-pound weight class, although he’ll likely wrestle at 174 at nationals.

“I can win a national title – that’s the plan right now. Obviously, I always practice hard, but this year I’m going even harder,” Keller said.

If Keller can do it, he’ll become the fifth NCCC wrestler to win a national championship, and first since Niagara Falls native and former UFC champion Rashad Evans won the 165-pound title in 2000.

“That’d be really cool. I don’t see myself going in the UFC though – I don’t really like getting punched in the face,” Keller joked.

Keller's road t0ward a national title begins at the Region III/Northeast District I Championships at Nassau County Community College on Feb. 11. The top finishers at that tournament, plus five wild cards, will advance to nationals in Council Bluffs, Iowa from Feb. 21-24.

“He's got a realistic shot at national title," Maute said. "He's a gamer. He doesn't fold under pressure. If he's on his game and someone beats him, hats off to him. I personally think he's going to win it.

"From a statistical standpoint, if he can win nationals, he’ll be the most successful guy we’ve ever had here."