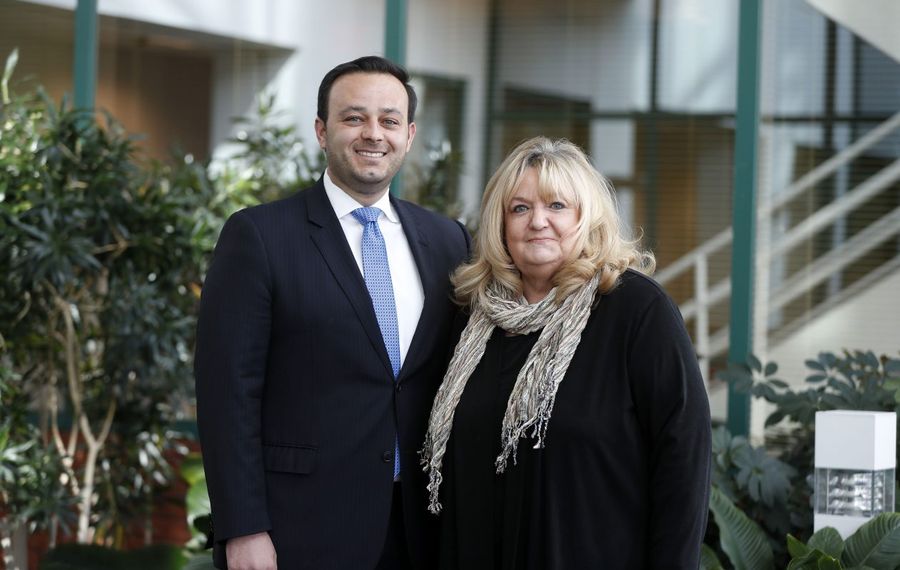 When A.J. Baynes arrived at the Amherst Chamber of Commerce last fall to begin serving as the organization's president and future CEO, he didn't know where his office would be.

Baynes asked Colleen DiPirro, who had given up the president's job but was keeping the CEO's title during a transition period, and he was surprised by her answer.

"I walked in and she said, 'Let me show you your office,' " Baynes said. "She goes, 'You're going right in here.' And it was her office. I looked at her, I go, 'Well you're not gone yet.' She goes, 'It's better you're in here than me. Because this is Day One and I want to make sure that everybody knows it's going to be you, and start going to you.' "

The exchange illustrates the close working relationship DiPirro and Baynes have developed during their time working together. DiPirro, who is stepping down after nearly 36 years in the Chamber's top job, handed over the reins to Baynes on Friday.

DiPirro is widely credited with transforming the Chamber into a formidable promoter of business and development in the town, which became a powerful regional economic engine in recent decades.

The Amherst Chamber had 150 members in 1981, when DiPirro left a staff job with the Erie County Legislature to take over, and there are 1,000 member businesses and 3,300 members today, with half the businesses hailing from outside the town.

Baynes, who left his position as chief of staff to State Sen. Patrick Gallivan, R-Elma, said he will work to build on DiPirro's legacy with the Chamber and the town. The Amherst native and downtown Buffalo resident previously worked for his family's third-party logistics and development company.

DiPirro will continue on as a senior adviser to the Chamber.

"A.J. says anything that goes wrong in the next 10 years, he's going to blame on me," DiPirro said, laughing.

Q: Colleen, what was the Chamber like when you first started?

DiPirro: "At that point, the leadership thought if you went north of Sheridan Drive, you fell off the face of the earth. It was very Main Street-centric. We were doing, at that time, parades and all the old-time, chamber-type activities. It took us a while to make that transition where we could still offer business services to the small mom and pop but look beyond that."

Baynes: "The other thing, too, I think to take into account with Colleen's success is she's a woman at an executive level. During that time period, she may not tell you this story, you had some board members that wondered why she wasn't showing up with homemade baked goods."

Baynes: "When you look at the fact that she was able to go to these larger companies, these larger executives, and lock them into the Town of Amherst Chamber and make them understand that, look, there is a benefit here. It says a lot about her tenacity and her gift as a saleswoman."

Q: What was Amherst's relationship to other communities?

Q: There are a number of commercial vacancies in the town. How do you find a way to reuse them?

DiPirro: "So as it relates, not to office parks but Main Street, the citizens have to understand that adaptive reuse requires density. And I think the properties that have been done so far have proven that they can live within a small-town, village atmosphere. The office parks, we have to look at smaller footprints. So we have to look at entrepreneurs who are willing to go in and share space."

Q: What should happen with the redevelopment of the former Westwood Country Club?

Baynes: "I think when you look at Westwood, it has to be appropriate growth there. And I think you have a partnership that's in there currently, and I think they're willing to sit at the table with the supervisor, and I know the supervisor is willing to sit at the table with them. And he's looking at combining it with Audubon, combining it with the gun range, and looking at it as a whole."

Q: Was the town in the past too accommodating to developers?

DiPirro: "I think for a lot of years the mantra in Amherst was we'll find a way to get it done. And they did. I think now again times have changed. We think more as a region. We think cause and effect of our yesses and nos. I think we're much more selective in the projects that we do."

Q: How did A.J.'s hiring happen, and how will you work together going forward?

Baynes: "It was one of those things, the timing was everything. And so we started this transition in September. ... But she'll remain close by, which is good. Obviously after 36 years, you develop a lot of institutional knowledge, and can advise me on what worked, what didn't work."

"It's synonymous, the Amherst Chamber and Colleen DiPirro go hand in hand."