The Buffalo Museum of Science has a fine permanent resident in Stuffy. He is a figure of a bison that came to the Buffalo Society of Natural Sciences in 1895 and even presided for a few years over Central Terminal.

But the museum's true mascot is even more impressive.

That would be the huge Alaskan grizzly bear donated by Amherst physician Dr. Joseph K. Link, who shot it in 1965. The bear is reared up on his hind legs, showing his teeth.

When I was little, Dr. Link was my pediatrician, and I remember staring at him as he listened to my heartbeat. Had he really faced down that bear? I had better behave.

Andrea Gallagher, the museum's director of marketing, isn't a Western New York native. But her husband is. She said the bear used to give him bad dreams.

Now, facing it herself, she sees it through admiring scientific eyes. "Very rarely do you get to be so close to a specimen as this." 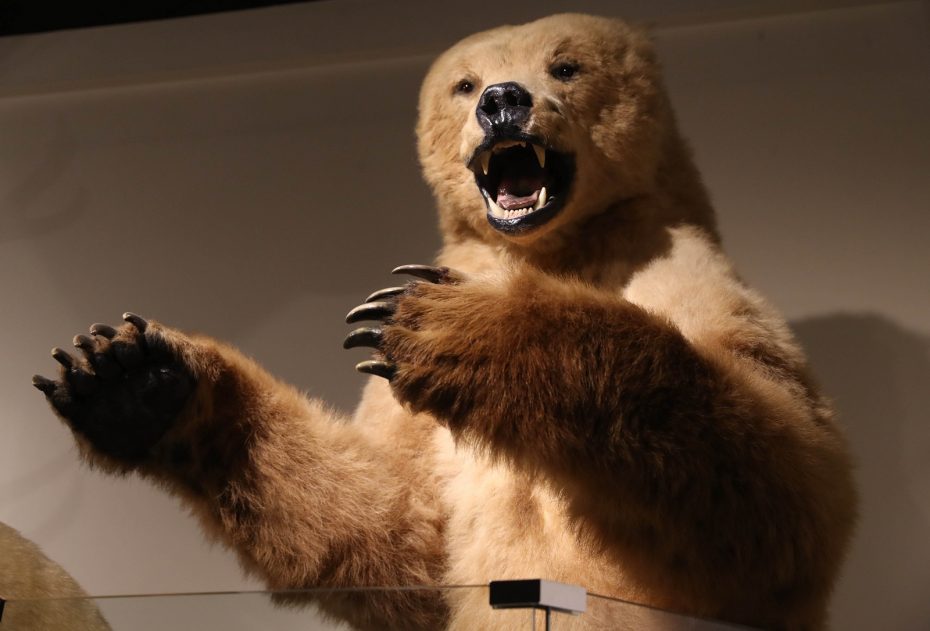 The Alaskan brown bear has been at the museum since 1966. (Sharon Cantillon/Buffalo News)

Would that all learning were presented in a way that is so striking and memorable. As much as the Buffalo Museum of Science has evolved over the years, it has always gotten the big things right.

When it opened in 1929, the museum was like something out of a children's book. Its graceful design by Green and Wicks reflected balance and dignity.

So did its location, on the parkway named for the great Prussian scientist Alexander von Humboldt, a free-spirited 19th century genius revered by scholars as "the Shakespeare of the sciences."

The museum became home to crystals, critters, Egyptian mummies, everything. It all came together in the central great hall, now called Hamlin Hall (lead image), off of which were smaller halls filled with fascinating things. 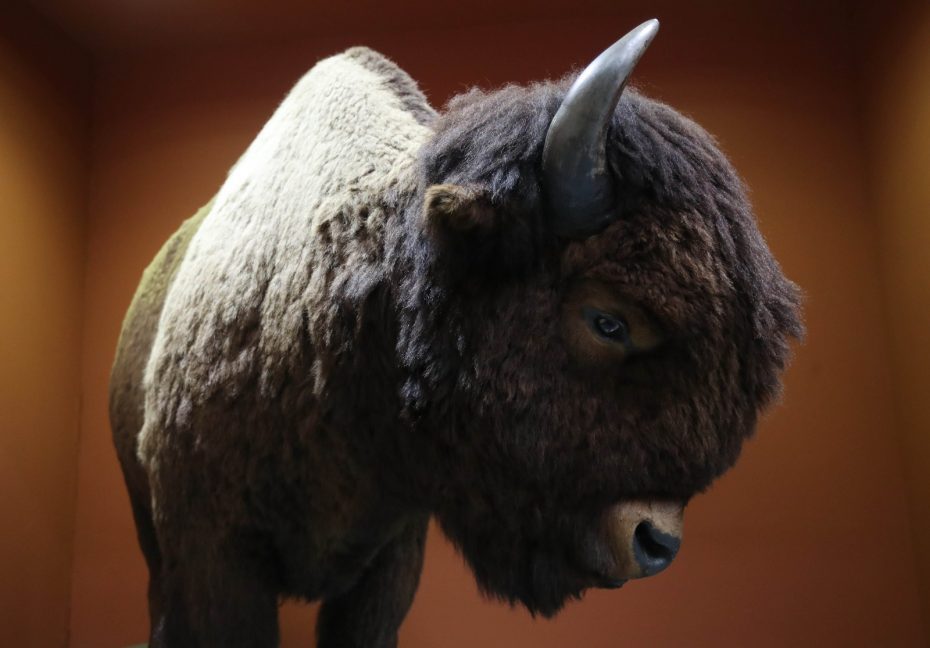 This is Stuffy, the American Bison that's been a part of the museum since 1895, when it was called the Buffalo Society of Natural Sciences. Stuffy is actually not stuffed. The bison skin was fit over paper mache and wire mesh. (Sharon Cantillon/Buffalo News)

Such a museum could have served as the backdrop to one of the fanciful creations of Roald Dahl, Edward Lear, or Edward Gorey. In the '70s it even became home to an exotic voluntary guest -- a great snowy owl. The noble bird chose to roost at the museum, and was a fixture for years. You would look for him through the heavy old windows, and there he would be.

Marisa Wigglesworth, the museum's current director, laughed when that topic comes up.

"When I got here, people kept asking me about this owl," she said.

Museums evolve naturally, thanks to changing tastes and technology, not to mention donations like Dr. Link's bear. The Science Museum is newer and more interactive now. It looks brighter, somehow. It is more geared toward little kids. 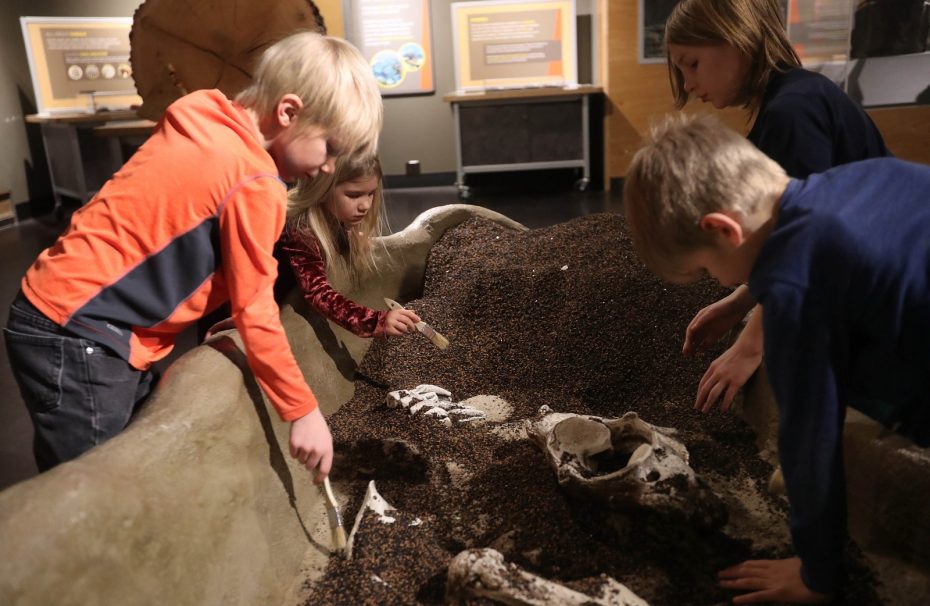 Cadzow siblings of Buffalo busily do an excavation dig in the Think Extinct exhibit. From left are Josie, 7, Iris, 5, Asa, 12, and Silas, 9. (Sharon Cantillon/Buffalo News)

Thanks to Wegmans, there is an exhibit called "Yum," focusing on food. Independent Health sponsors Health Zone. On the top floor, the exhibit "Buffalo in Space" has wonderful features that teach you about our solar system.

The children at the museum couldn't be happier -- running around, pushing buttons, snapping together pieces of plastic pipe.

Alexandra Anderson, of Orchard Park, was performing a gravity experiment along with her two little ones, Samuel and Anneliese. They have a family membership to the museum. 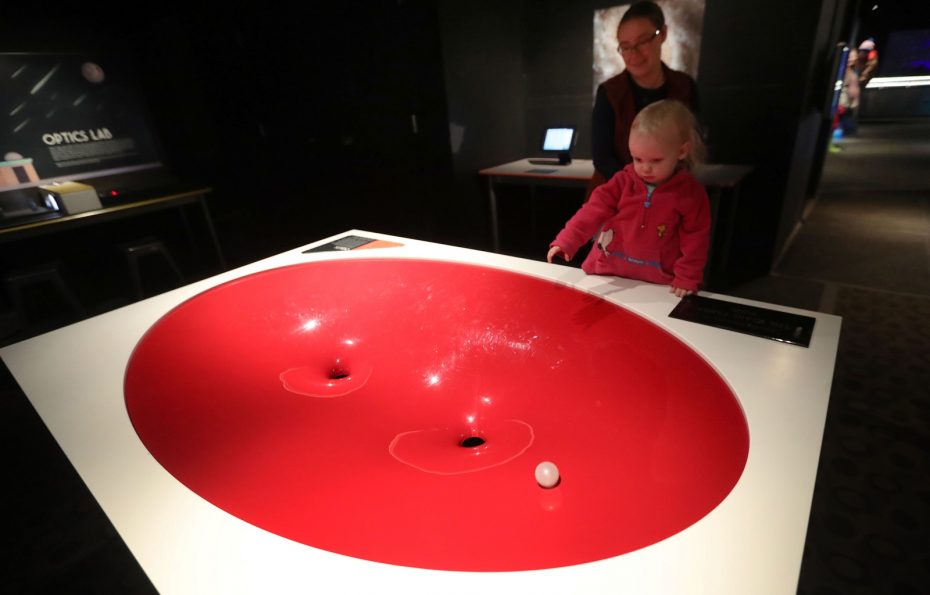 Anneliese Anderson, 1, plays with a gravitational well. Behind her is her mom Alexandra of Orchard Park. (Sharon Cantillon/Buffalo News)

The museum entertains her as well, she added. "It really is geared toward learners of all ages."

"Though we've made a lot of changes, we were careful to keep people's favorites," she said.

The central hall is now dominated by a recent gift, a giant mastodon skeleton from the Pleistocene Era. But scant yards away, around a corner,  is a Fee Jee mermaid that was exhibited at the Pan-American Exposition before being donated to the Museum. It's hard to describe a Fee Jee mermaid, so let's quote Wikipedia: "It was a common feature of sideshows, where it was presented as the mummified body of a creature that was supposedly half mammal and half fish." 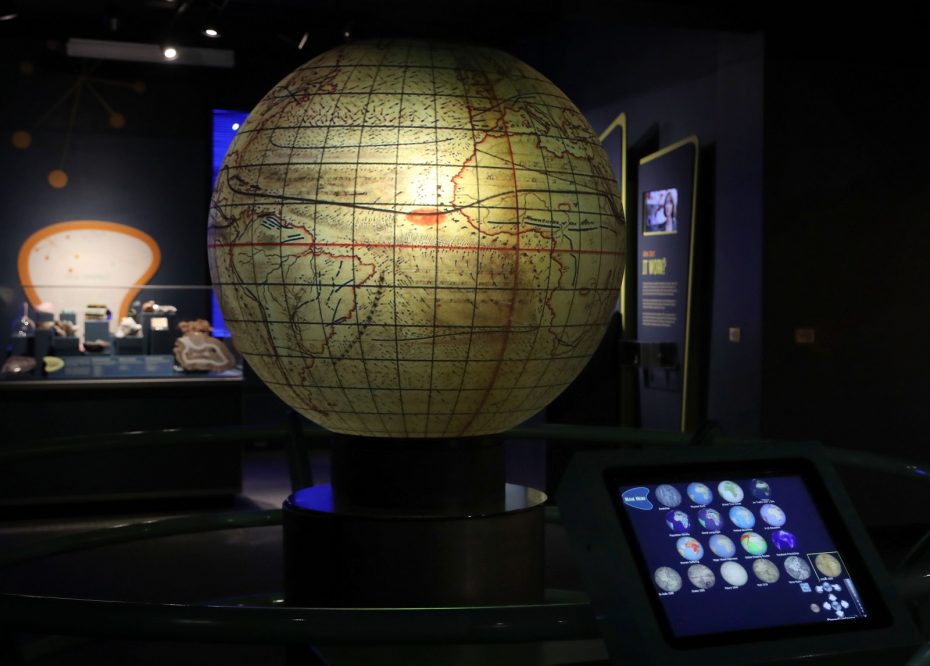 Our Marvelous Earth explores the earth's systems from extreme weather to geological phenomena. The Omni Explorer is an interactive display which shows, weather patterns around the world and other earth activity. (Sharon Cantillon/Buffalo News)

Victorian-looking figures of extinct birds -- the dodo, the great auk -- occupy glass cases near jazzy interactive attractions. Quietly attaining seniority is a giant yellow jacket nest pulled from an attic in Angola in 1985. And a taxidermist has bestowed immortality on Eddie the Chimp, a longtime star at the Buffalo Zoo.

Some have disappeared and reappeared. The museum's legendary rooftop telescope, lovingly refurbished, is scheduled for re-opening this spring. The Bermuda Coral Reef diorama, creatively situated in the modern Rethink Extinct exhibit, was mothballed in the 1990s but is now back. It is the work of nationally renowned diorama artists George and Paul Marchand, and you would swear you were seeing actual water and sunshine. 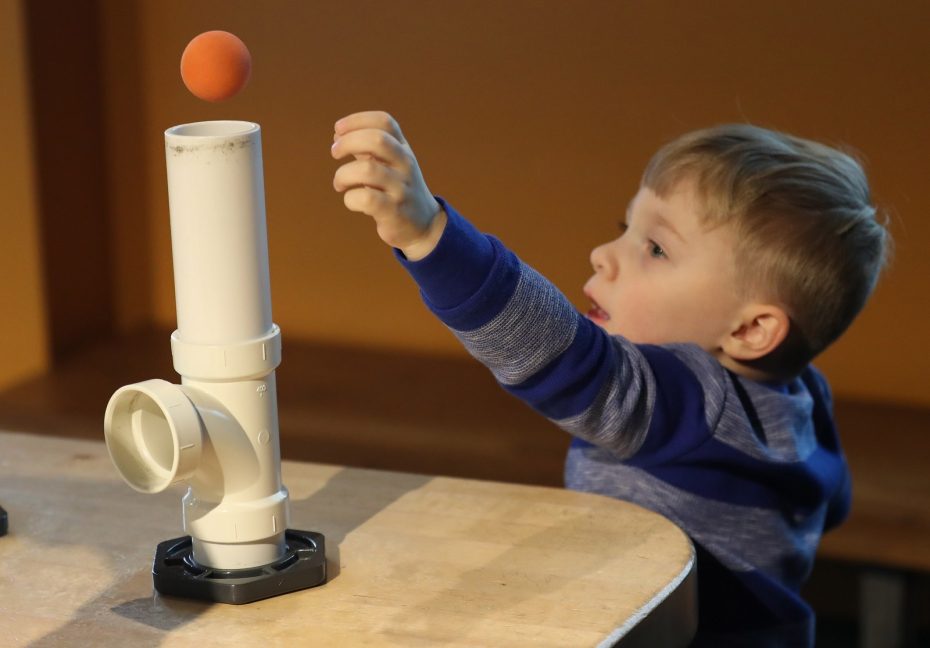 In Motion is an interactive exhibit that explores the basics of physics, mechanical motion, engineering and organic motion. An air pressure interactive has the attention of Benny Blocho, 3, of Lancaster. (Sharon Cantillon/Buffalo News)

Another Marchand diorama, depicting bison, has special significance. It is all that is left of the original installation that filled the central hall when the museum opened. The blue sky, the tall grass -- it looks so real. I stopped, nostalgic, remembering how amazed I had been as a small child, taking in this scene.

Walking away reluctantly, I turned, and had to smile. A little boy had toddled up to the glass and was staring, transfixed. For a moment, time stood still.

I would call that a miracle of science.

The neoclassical building designed by Esenwein and Johnson was erected in 1929. (Sharon Cantillon/Buffalo News)

100-Plus Things: Hotel @ the Lafayette connects past and present