VANCOUVER – Thomas Vanek is on his seventh team now, and it wouldn't be a surprise if there was an eighth soon. Come next season, there might even be a ninth.

Vanek is showing no signs of hanging up his skates.

The former Buffalo Sabres star continues to find the net in his 13th NHL season. He was second on the Vancouver Canucks with 14 goals and 35 points in 48 games entering Thursday's meeting with the Sabres.

"Doing well, just a different uniform," the 34-year-old said with a smile in Rogers Arena.

Vanek still knows how to find the open areas, release his accurate shot and use creativity to make passes. Those traits never go out of style.

"Those days when I can score 35-40 are probably done with, but I feel like I can still get those 20-plus goals and at the same time help out other guys."

Vancouver center Bo Horvat concurs. The 22-year-old is a cornerstone of the Canucks' rebuild, and he's learning a lot with Vanek on his left wing.

"He’s always in the right spot at the right time and making plays at both ends of the rink," Horvat said. "The behind-the-back passes, he’s a pretty special player."

Vanek's experience shows. He's garnering a reputation as an extra coach on the ice. He told Horvat on Tuesday that Los Angeles would be susceptible to plays around the net. The Canucks rolled to a 6-2 victory as the linemates combined for one goal and four assists.

"He’s really easy to approach," Horvat said. "He’s so good at protecting the puck down low and playing that hard game and getting to the dirty areas."

Vanek's success should once again draw suitors at the February trade deadline. He's on a one-year, $2 million deal with the 28th-place Canucks, making him the ideal rental candidate.

He knows the situation. In 2013-14, the Sabres traded him to the New York Islanders, who sent him to Montreal. Last season, Detroit traded him to Florida.

"Obviously, it's a one-year deal just like last year," Vanek said. "I was hoping to stay in Detroit. Things were going well. We're out of the picture, so it's looking similar here."

Vanek was part of the famed draft class of 2003, regarded as one of the best ever. The No. 5 overall pick is holding strong through 933 NHL games.

Vanek's numbers will continue to rise no matter where he plays, but his opening nine seasons in Buffalo will always be special.

"I've always enjoyed my time there," Vanek said, "and felt it's like home."

The Sabres goaltender was wearing Robin Lehner's equipment. But when he took off the mask at the morning skate, it looked nothing like Lehner.

It's a new-look Lehner.

The goalie has shed his long locks and beard. He's a short-haired, clean-shaven guy who looks like he is heading to a job interview. 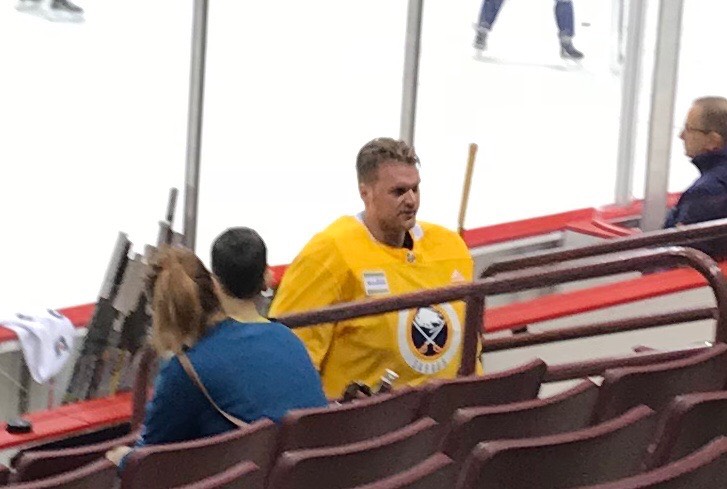 Robin Lehner will start in goal for the Sabres on Thursday in Vancouver. (John Vogl/Buffalo News)

It's all because he's visiting with old friends.

Lehner is close with Vancouver goalie Anders Nilsson, who played for the Sabres last season. The Swedish netminders have been on national teams since their teens, so Lehner also knows Nilsson's wife, Emelie.

"Anders Nilsson's wife always cuts my hair, so it was time," Lehner said. "Every year since I started playing with him, she's great at cutting hair. She's the only one I trust with scissors around me."

The Sabres will put away their skates this weekend for the All-Star break. The lone exception is center Jack Eichel, who will play for the Atlantic Division in the All-Star Game in Tampa Bay.

"It's a huge honor to be able to represent the Sabres there and go to an event like that," Eichel said. "It's something I watched a lot as a kid, so to be able to be part of it now and have my family down there, it should be a good weekend."

Sabres coach Phil Housley has one message for his young center.

"Enjoy it," the coach said. "He's deserved it. His playing is speaking for itself. It was a good pick, and I think he'll enjoy that three-on-three format."

Sabres determined to have perfect trip to Canada